The Death of Star Wars

The Death of Star Wars is an impassioned 3-page essay by Tracy Duncan. It was printed in the last issue of Against the Sith, and is related to Open Letter to Star Wars Fans by the Duncans. 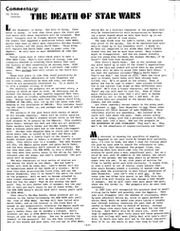 The topic is Star Wars and Tracy's views on the the future of the fandom after viewing the movie The Empire Strikes Back, which in turn was viewed through an extremely Luke-centric lens.

The character of Leia Organa is never mentioned, though this can probably be explained by Tracy Duncan's views; see Against the Sith.

Luke Skywalker is dying. Han Solo is dying. Chewbacca is dying. In less than three years the third and last movie with these characters will be released. What then? Prequels will be filmed, movies that deal with the events that happened a generation before STAR WARS, movies that have as their main characters Obi-Wan Kenobi, Luke's father, and the young Darth Vader. These films will explain how Darth Vader came to power under the Emperor. We will have no more ADVENTURES OF LUKE SKY-WALKER. George Lucas says it takes three years to make a STAR WARS film. That's nine years of energy, time and resources devoted to creating three movies that tell the history of what essentially we already know. NINE YEARS. Add that to your age for a personal time reference. Then perhaps Luke will return in the third trilogy. These nine years is time that could potentially be devoted to further adventures of Luke Skywalker and his friends, characters we know and love, and whose lives we are personally interested in. Is it worth it to film a prequel trilogy of films?.

The scenario of the past deals with events of which we are already familiar. There will be little surprise in prequels. Obi-Wan's student knight falls to the Dark Side because he is seduced by the Emperor. This student, Darth Vader, betrays the Jedi and they are all murdered. Vader murders Luke's father and Obi-Wan knocks Vader down a volcano which puts him in the black life-support suit. Obi-Wan then smuggles baby or child Luke to Tatooine where Luke is raised by his Aunt and Uncle and where Ben takes up a lonely vigil in the desert, a knight without power or honor, a criminal to the current order. This entire tale is a tragedy. The Jedi Knights all die, the Empire gains power and gains Darth Vader, and the main characters don't succeed at anything. How can they when Luke, the NEW HOPE, is only a child? How can they when this entire story is the set-up for Luke's entrance onto the stage, and Luke's successes? The prequels will be hopeless.

Let these legendary heroes remain in the misty past. The present is now. Luke Skywalker is now. These other characters all exist because of Luke Skywalker. Their individual stories are secondary. Ben existed so he could tell Luke about the past. Vader exists solely to be Luke's enemy, give him a personal reason to fight, and make Luke into a hero. How can the prequels be THE ADVENTURES OF LUKE SKYWALKER? They won't be. They won't be the adventures of anyone—certainly not Vader!

My interest in knowing the specifics of exactly what happened in the past could be termed mild curiosity. Sure, I'd like to know, but when I read fan fiction about the past my eyes seem to search for references to Luke, I'd be doing that throughout the prequel films, too, wondering when Luke would come into the picture and wishing he could play a more significant part.

It's very rare that so much (33%) of a hero's adventure saga is about his origins. Superman's childhood history took up only a few comics compared to hundreds of adventures with the fully grown hero. King Arthur's birth and childhood lasted a weak two chapters out of about 100 exploits of him as king and of his knights, the exact amount depending on your source. Tartan's birth and childhood comprised eight chapters out of the first book is some thirty total books. Hercules' birth and childhood are similarly short compared to his twelve labors and his exploits in the Trojan War. The same goes for Achilles, Aeneas, Jesus, Buddha and the Tolkein legends, of which one book, the Silmarillion, recounted the past, compared to three books in the present. One film, therefore, would surely be enough to set the scene of Luke Skywalker's childhood. It's not hard to see why not much more is spent on their childhoods. We want to see these heroes as adults, coming into their own and performing their great deeds for which generations to come were thankful. Must everything be so significant in Lucas' universe? I'm talking about the three sets of three films—a trilogy of trilogies. Sure, it sounds nice and organized, but I think Lucas could take a hint from the story tellers of old. We fans can fill in the details. It wastes no time and takes no years, years that could be spent learning what's over the next horizon, what is yet to come, and how we are to get there. Science fiction fans are future looking people.

If I had known there would be such an immediate end to Luke's life-span as a hero, I never would have bothered becoming such an involved fan. I don't like to see the ending of something I love just around the next corner. I had hoped STAR WARS would be different, something current, something constantly to look forward to. But I was wrong. The end is coming all too soon.

It is quite possible that, if Lucas follows this plan of prequels, I'll go find something else to be a fan of. Something new may come up in three years that satiates my appetite for forward-looking space adventure. Someone out there might want to do a science fiction or fantasy adventure, either original or based on an already popular series which could be made into a movie or TV series. It's certainly possible. At least whatever it it will be something living, something growing, something advancing forward. Unlike the STAR WARS saga which just may write for itself an early death.

If the prequels, with an entirely new set of characters, finds an audience, it will most likely be a different audience from the present one. We love these characters, now, not the dead past. Wc look for adventure, now, not the telling of a history. After JEDI, the prequels will essentially be the story of ghosts.