The Corellian Embassy was an internet archive of Star Wars fan fiction that had previously been published in print Star Wars Zines, most of which hadn't been available since their publication in the 80s and 90s. The site's original mission was to archive stories starring Han Solo.

Fan writers who had published in the early fanzines of the 70s and 80s were contacted and asked for their permission for their stories to be scanned and uploaded to the site. No stories were archived without permission from the author.

The site had two main indices, one with stories listed by title and the other by author. In 2006, 350 stories had been scanned and archived, with over forty authors. 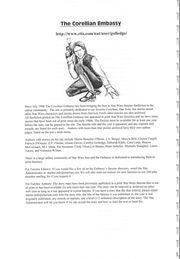 a 2000 flyer printed in Bloodstripe #1
Since July 1998 The Corellian Embassy has been bringing the best in Star Wars fanzine fanfiction to the online community. The site is primarily dedicated to our favorite Corellian, Han Solo, but stories about other Star Wars characters and stories drawn from Harrison Ford's other movies are also archived.

All fanfiction posted on The Corellian Embassy has appeared in print Star Wars fanzines and we have many stories that have been out of print since the early 1980s. The fanzine must be available for at least one year before the story can be posted to the site. The fanzine title and the year it appeared, and any reprints and awards, are listed for each story. Authors with more than four stories archived have their own author pages, listed on the site's main menu... There is a large online community of Star Wars fans and the Embassy is dedicated to introducing them to print fanzines. For Fanzine Editors: If you would like a free ad on the Embassy's fanzine directory, email the Site Administrator. We will also send out notices for new fanzines to our 260 plus member mailing list if you request it.

For Fanzine Authors: The story must have been previously published in a print Star Wars fanzine that is out of print or has been available for sale more than one year. The story can be indexed or archived on other web sites as long as it has appeared in a print fanzine. If you have a story that fits that criteria, please email with the story title, the title of the fanzine it was published in, the year it was originally published, any awards or reprints, and a brief(1-2 sentence) description of the story. The Site Administrator will let you know if we can accept the story and how to send the text or html file.

During the 80s and 90s, there were several long-running Harrison Ford fanzines (examples: Facets, Flip of a Coin, and Choice Parts), which included fan fiction from Star Wars, the Indiana Jones movies, and other films starring Ford. Eventually the site also began to archive these fanzine stories, opening up separate categories for Fan Fiction based on Harrison Ford's other characters, other Star Wars Original Trilogy Fan Fiction (which was any story where Han was not the main character), Prequel Trilogy Fan Fiction, and a separate index for Crossover Fan Fiction.

A Change of Hands, and Then Erasure

In June of 2006, The Corellian Embassy was adopted by Aquarius, editor of the Star Wars site This is Some Rescue.

By 2013, the archived version of the original website on the WayBack Machine was erased when the domain name was bought by a bulk website seller and instructed the WayBack Machine to remove all previous content, a practice all too common. Please, fans and archivists, contact Open Doors for help with fragile and at-risk archives and fansites.

Portions of the website can still be found on the Internet Archive via earlier versions, however not all links may have been archived. Links are provided in the info box above.

From Interview with Carolyn Golledge in 2013:

How did the The Corellian Embassy come about and what was it like working with author [Martha Wilson]? Carolyn Golledge: The initial impetus came from our dissatisfaction with a fanzine editor who repeatedly and radically altered our stories without permission — note NOT those mentioned above. Finally, me being Australian, I knew that people overseas couldn’t afford the high expense of Air Mail to buy fanzines. Martha worked in website design, which back in 1998 was new stuff. She is a wonderful lady and a good friend who also was a big help in developing my writing skills. I did the collecting of permissions from authors, and put in months of laborious scanning of stories from old fanzines. Martha put in equally long hours redoing formatting and HTML script and other techno stuff about which I knew nada. It was a very popular website and it’s very sad to think it’s forever gone. I’m currently trying to track down the files (both Martha and I had our old computers die with them) and am hoping that someday soon the Embassy will again be open for reading! There is so much fun to be had in further exploring the Star Wars realm and many talented people who want to write or become artists. When I began my own print zine, Bloodstripe, in 1999, it was a great privilege to find talent from many countries; one issue I believe had at least 8 different countries represented from Asia, through Europe and USA. It brought so many people together and created many friendships.