BBC Times is a gen Blake's 7 club newsletter out of the U.S. that was published by Deb Walsh.

It is "the number one newspaper of the Terran Federation."

The BBC Times 1 was published in November 1981 and contains 8 pages. 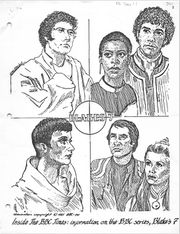 Welcome to the first issue of The BBC Times. First, a few words about who we are and what we hope to accomplish. We, the Bored without Blake Committee, are Mary Bloemker, Pat Brimer, Mary Fall and Deb Walsh. We are simply fans of Blake's 7 who want to addict other fans, and we decided the best way to do that was to get information out to all interested parties — thus The BBC Times. This newsletter is the result of our combined efforts to collect and evaluate information on B7 and its growing fandom. However, we don't want to take ourselves too seriously — and so we call ourselves the Bored without Blake Committee (the Freedom Party was vetoed on the grounds we didn't want to be investigated by the FBI). Why that title? Well, one weekend Mary B., Mary F. and Deb went to a con, taking all the B7 materials with them, and leaving Pat alone and bored — without Blake's 7. Simple, right?

This newsletter may be the first of many, or one of a kind. That is dependent on your response, using the attached questionnaire. If we find that there is sufficient interest in a U.S.-based B7 fan club, it's ahead, standard by twelve — if not, well, go to Cygnus Alpha, do not collect 200 credits. We also plan to put together an annotated episode guide (with cast lists and comments) sometime in the future, so SASE us if you're interested.

We all hope you enjoy the newsletter ~ let us know what you think!