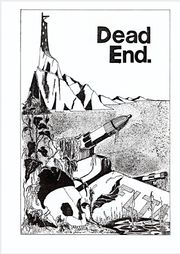 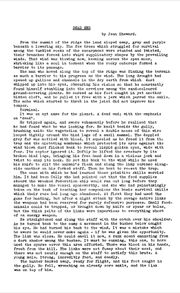 It a continuation from the episode "Terminal."

The copyright date is Oct 1981, and there's an apology in the ads/editorial page for the zine's lateness, so the story was written before series 4 was shown. It's a continuation from the episode Terminal, and of course is now an AU series 4.

The crew are busy trying to repair the derelict ship that Servalan left them, with the minor complication that they haven't enough food to last the time the repairs will need, and the Links make hunting dangerous. But unknown to them, something is watching them. And then it starts experimenting on them.

Cally is kidnapped and stripped of her telepathy, Tarrant is attacked several times, and apparently killed. Eventually the mystery is solved, the threat dealt with, and the crew find themselves with some useful equipment.

It's an interesting "might-have-been", and generally competently written, but I didn't enjoy it as much as I have other zines from Green Dragon Press. The characterisations felt a bit off to me, as the characters were shown as actively disliking one another rather than just being made snappish by the stress of losing the Liberator. There are also glaring continuity errors, the first of which was Cally having hysterics about losing her telepathy because she was the last of the Auronar and if she's no longer telepathic the Auronar are effectively dead. Excuse me, but what was that bit at the end of Children of Auron when the surviving adult Auronar and the genestocks are transported to a safe planet to found a colony? Orac has a bad attack of plotdevicitis, and the author apparently can't make up her mind whether Terminal was built by the Federation (and a Federation which apparently had a working teleport at the time Terminal was built, which it had completely forgotten about by the time of the series) or by aliens. These spoilt an otherwise enjoyable story for me.

Given my reservations, I can't whole-heartedly recommend it, but it's worth getting if you run across a cheap copy. [1]

As there is no separate credit given for the cover, I assume the art is by Sheward as well.

This one is a bit interesting just for when it came out. This is a post-”Terminal” story…written BEFORE “Rescue” aired. The zine was published a month after Series D began, with an afterward apologizing for the many months delay to subscribers. So the story isn’t meant to “undo” the 4th season…it was just a fan continuation for a CANCELLED series. “Terminal” was actually supposed to be the final episode of the show back in 1980. Series D happened apparently because the head of the BBC saw “Terminal” and decided Blake’s 7 needed to keep going.

Just think…there’s an alternative reality where the show ended on “Terminal”, and all of the fandom’s efforts and debates were like this story, centered around getting our heroes off that planet, instead of figuring out how that shoot-out on Gauda Prime really ended.

The story itself is short and kind of weird, but I like it. It feels like it could have been an episode of the show. And hey, if you’re a Cally fan, you’ll definitely like it more than “Rescue!”