The Agony Column is a gen multimedia anthology.

The Agony Column 1 was published in January 1994 and is 87 pages long. Artwork by Sandra F, Helen Leithead & Jan H. 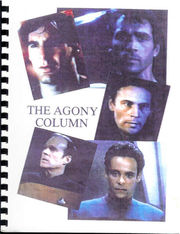 This self-professed "hurt, comfort, and wallow" zine is titled The Agony Column, is edited by Jan H of Shatterzine Publications (United Kingdom) and is distributed in the United States by Peg Kennedy and Bill Hupe of Mason, Michigan. Now the title of this zine alone would either make you grab it on sight, or shy away depending upon your tastes. I was, by and large, not disappointed with what I got, a color cover printed from photographs, but nicely assembled; a selection of stories from programs I was actually familiar with (STTNG, V, Quantum Leap, War of the Worlds). The interior was heavy on text and light on illos, and although there seemed to be some problems with printing the zine (an occasional page printed crooked that made this reader feel she was slipping off the page) it was competently done. The selection featuring the good doctor was titled "Some Far Flung Shore", by Helen L. I was somewhat put off by the snide subtitle given this story, fearing the story itself would be written with the same sarcastic tone. I am pleased to say, it was not. This is actually a serious character study, and I feel the author did a good job of capturing the character of Julian Bashir, the physician. While I found some editorial problems with this story, it is, for the most part, well written. Particularly annoying was the author's habit of switching points-of-view. which created some confusion in the earlier portions of the story. Her writing did even out as the tale progressed. Other difficulties such as repeated words and descriptive phrases could have been ironed out with stricter editing, but most lapses of this nature were relatively minor. Ms. L was able to create a good balance between descriptive passages, dialogue, and action, never leaving her characters in a void. As I said, this is a good character study, and despite the implications of the zine's title, not as bloody as some I've read, nor as deliberately violent." [1]

A few months back someone recommended this 'zine to me, and after a printing delay I finally got my copy about a week ago. I can see why it was so highly recommended, and I'd like to do the same here, especially for those of you who are (like myself) really big Dwight Schultz fans. Not only is there a terrific - if rather sad - Murdock story, but there are not one but TWO Star Trek:TNG stories that are centered around Dwight's character Reginald Barclay! "I Don't Like Mondays," by the editor, describes Murdock's experiences in the prison camp the team was held in during the war, what happened to him after the Team's capture after the bank job and how he ended up in the V.A. It's well done and an offers an interesting perspective on Murdock's character, and kept me thinking about it quite a long time after first reading it. Also by the editor is "The Little Engineer That Couldn't," a short (2 page) piece on Barclay's thoughts as he is onboard the shuttle craft taking him to his new assignment on the Enterprise. The real kicker of the 'zine, however, is "Some Far Flung Shore," a ST:TNG/DS9 crossover centered on Barclay and Doctor Bashir, who is on board the Enterprise after a special medical assignment. While attempting to rescue the survivors of a terrible natural disaster on a planet, Barclay and Bashir are trapped together in a cave-in and Bashir is critically wounded. This is a terrific 25-page novella, written by Helen L, and all of the characters well-drawn, especially Barclay and Bashir. Really great stuff if you like Barclay!

Also in this 'zine are stories based on Highlander, V, Quantum Leap, Dr. Who, and several other fandoms. My only word of warning is that if you have a low tolerance for pain and suffering, think twice about this one. It's purely hurt/comfort and wallow, and the sub-title on the novella ("Doctor Space-Puppy Suffers in Eight Chapters of Sheer Bloody Hell") is right on the nose. [2] 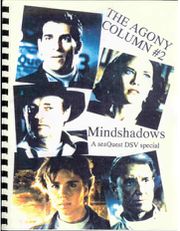 The Agony Column 2 was published in March 1994. It is an 82-page SeaQuest DSV novel called "Mindshadows" by Jan Harley with artwork by Sandra Finch & Helen Leithead.

This zine is a sequel to the episode 'seaWest'. 'Mindshadows' deals with the return of Frank Cobb after his escape from the underwater prison colony where he was being held. Wanted by the authorities, in a shrinking world where places to hide were few and far between, Cobb's only thoughts were of revenge on those who had ended his comfortable, profitable existence at Broken Ridge...various members of the seaQuest crew. 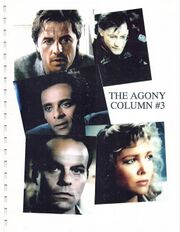 The Agony Column 3 was published in November 1994 and is 96 pages long. The original print run was 50. 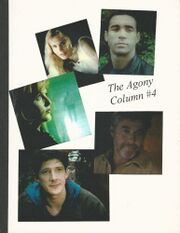 The art is by Sarah J. Waters and perhaps Helen Leithead.