Tasha Yar is a character on Star Trek: TNG, one that was killed off fairly early in the run of the show. 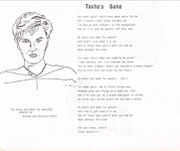 from the 1988 zine In A Different Reality #28, , "Tasha's Song," filk to the tune of "These Boots Were Made for Walkin'" by Brenda Perry and Michelle Perry

She was a character, like Leia Organa, who was a a flashpoint regarding fans' expectations and reactions regarding strong female characters.

She is most often paired with Data.

Fans in the letterzine On the Double had a discussion about strong women and the use of the word "dyke" when describing Tasha Yar.

Regarding [D B's] comments about Lieutenant Yar, I can only say that, as a personal friend of [D B], she has absolutely NO prejudice toward lesbians. Rather, I simply believe that there are several definitions of the word "dyke". After having this discussion with friends over a period of years, we basically came to the conclusion that a "lesbian" is a woman who is attracted to other women and/or is involved in a physical relationship with another woman. A "dyke", on the other hand, isn't always even a lesbian - i.e., a "dyke", by definition, is a woman who, through her dress, attitude and "vibes", portrays a macho-male image. Lieutenant Yar certainty seems to fit the latter definition. She is certainty not a lesbian (at least not that the viewers have been told), yet she puffs out her shoulders, lowers her voice three octaves, and reaches for the phaser at the first sign of trouble. From my personal viewpoint, I can't see why Paramount didn't simply use a man for that role, since that is what Yar is attempting to be. Now don't get me wrong! I'm as much a feminist as the next person -however, when a woman starts acting like a man in order to get her point across, that's every bit as unfeminist as if she were a sniffling twit. In other words, by portraying herself as a "man", Yar is essentially putting out the vibes that women are inferior and that, to get ahead in space, she must adopt male attitudes. That is how I would define "dyke". And if Paramount had really wanted a strong female character, why didn't they give us a woman as a starship captain instead of Charlie "Picard" Brown? [1]

I found [D B's] condemnation of Lieutenant Yar for appearing or behaving like a "dyke" disquieting. This reveals a prejudice against aggressiveness in women, as well as a prejudice against lesbians. It may be true that Tasha Yar as a character has a special appeal for lesbians. I, and a number of my lesbian friends, all fell in love with her on sight. [2]

Yar is a character with a lot of rough edges, which is not necessarily bad, as it gives the writers (both pro and fan) a lot of potential for character growth. However, my own preference for a female (or male) Chief of Security would be a person with more experience and less impulsiveness. [3]