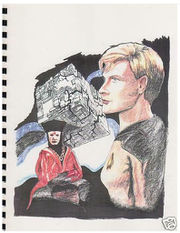 Resurrection is a gen Star Trek: TNG 89-page novel by Richard van Frank. It has a cover by Marie Williams and interior work by Teegar, TACS, Maria Williams, and Robert Jan.

This zine was edited by Peg Kennedy.

It was originally to be a part of the Hailing Frequencies series, but was instead published as a standalone zine.

From Bill Hupe's catalog: "Ensign Crusher is given permission to join an elitist group of 'time cops' on a special mission, and returns to find Tasha Yar alive and well. When Q hijacks the Enterprise to fight a new Borg threat, stranding half the crew on shore leave, Tasha finds herself in command of the 1701D."

From Media Monitor: "Tasha Yar is once again aboard the Enterprise, but not all is as it seems. An action/adventure story which includes the best elements of Human interest stories and technology."

From The Monthly: "Tasha was not killed in 'Skin and Evil.' Armus had more insidious plans. When Tasha mysteriously shows up on the Enterprise, why is Riker afraid she's a 'wolf in sheep's clothing.? Why does she blast at Worf with her phaser set to kill? Yet Picard promotes her and puts her in temporary command. Q kidnaps the ship to Sector J2-6 and the wild adventure is on again. How does she zap an attacking Borg ship -- simply and logically? Her away team lands on an impossible planet, discovers a dying people with a once glorious past. Are these beings safer under Federation principles? Tasha is hotter than ever for her old lover. Can Troi and Guinan keep her in balance?"