soo's Den of Obsessions (or soo's Fiction, or Hopper Fiction[2]) was a personal slash and femslash website with fanfiction and recommendations. It was a Freedom of Expression in Fanfiction member site[3] and a member of the Slash Fan Fiction Ring.[1]

The site was hosted by slashaholics.org. 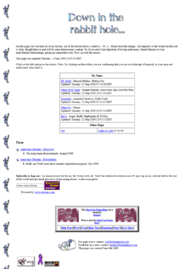 older version of the page

A Buffy/X-Men: the movie crossover. This series will take place before, during, and after the movie. Many pairings will be highlighted including m/m.

Shop Till You Drop By soo, Slashbear & Attilla the HunEE

Shop Till You Drop II: The Banana Republic and Further...

There's not much here at the moment, but there is a lot in the works including: Highlander/ForeverKnight and Highlander/B5.

Warrior Sluts in Chainmail By Attilla and soo

For Love of an Angelic Face

Can We Just Be Friends?

Stoned on Your Love By soo & 'tilla

Warrior Sluts in Chainmail By 'tilla and soo

I Will Protect You