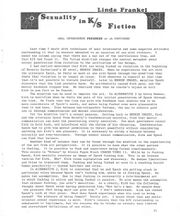 In it, Frankel wrote of masculinity, power, violence, submission, equality, sex roles, and mindmelds as she discussed a number of K/S stories.

For the seven other essays in this series, see Sexuality in K/S Fiction.

I had earlier mentioned that Kirk saw being fucked as violation in the beginning of Beverly Sutherland's AU novel, BROKEN IMAGES. When he experiences the act with the alternate Spock, he feels so much at one with Spock through the mind-link they share that violation is no longer an issue. Kirk observes to himself at that time that it's not possible to violate yourself. Later in BROKEN IMAGES, mainline Spock discovers that the link prevents harm. He accidentally caused Kirk pain, and the mental backwash stopped him. He realized then that he couldn't injure or kill Kirk in pon farr as he feared.

The mindlink can be used to improve the act. In ALTERNATIVE 2 by Gerry Downes, Kirk is horrified when he feels the pain of his initial penetration of Spock through the link. He finds that the link can give him feedback that enables him to be more considerate of Spock's needs, and makes being fucked even more pleasurable than it had been. Even between non-telepathic Terrans, the way to achieve good sex is through communication and mutual consideration.

Another kind of balance that can be found through the mindlink is the experiencing of the act from all perspectives. It is possible to know what the other partner is feeling. It is possible to fuck and experience being fucked simultaneously. This occurs in "Echoes" by Alexis Fagen Black (NAKED TIMES 1). While he is fucking Spock, Kirk mentally receives an image of Spock fucking him. This is an intense turn-on for Kirk. Why? Kirk loves exploration and discovery. He denies limitations and tries to transcend them. Fucking and being fucked at once is a reaching beyond human possibility — beyond barriers and roles. In ALTERNATIVE 2, Kirk is concerned that he and Spock are getting stuck in particular roles because Spock isn't fucking him, while he is fucking Spock. He makes two assumptions. One is that fucking is necessarily a role-donimated act in which fucking is active and being fucked is passive. He also makes the assumption that without fucking, you aren't masculine. As a result, Kirk has the following thought about Spock never having penetrated him, "But he's a man. He should know the pleasure that being male can give him." I don't understand. Kirk had sucked Spock's cock at that point. What does Spock experience when his cock is being sucked? The pleasure of being female? Surely not. I would think that any penis-oriented sexual experience is male. Kirk's concern that the K/S relationship is unbalanced is legitimate, but the reasons why he thinks so reveals very limited and stereotyped definitions of sex roles.

Let's examine the stereotype that being fucked is passive. It is possible to take a very active in being fucked. One example appears in "Fantasies" by Beverly Sutherland NOME 8 when Kirk lubricates Spock's cock with Kirk's own cum, inserts it and then pushes Spock's cock further and further inside himself. Spock was totally passive in this. Even when the penetrator is pursuing an active role, this doesn't mean that the penetrated partner is totally passive. S/he can actively pursue pleasure through movement. I would like to see more recognition in K/S of the potential for being active while being in the so-called "passive" position. Both fucking and being fucked can be active or passive. They can involve both giving and taking at one and the same time. Sexual stereotype isn't limited to attitudes about roles. This problem also arises in comparisons between hetero and homo fucking. In "From Choice" (GREATER CALIFORNIA K/S) an otherwise wonderful story by Vivian Gates, we see the following psychoanalytic comparison, "If driving into a woman was like trying to return to the womb, then shoving into Spock was like trying to climb into himelf." I don't find this terribly flattering to either heterosex or homosex. It implies that heterosex is infantile because it is a yearning to be a fetus in the womb once more, and that homosex is narcissistic because both partners have the same sexual organs. Homosex and heterosex are different experiences, but I'm not sure that labelling them in this Freudian fashion is at all helpful. Why not simply accept, in the spirit of IDIC, that they are different and not make comparisons at all?

In this context, I would like to discuss "Forever Fire" by Robin Hood (GREATER CALIFORNIA K/S) — not because it is the most insensitive, but because it attempts to be considerate of a woman's feelings and fails. How does it fail? The woman, Zarabeth, is brought things to make her stay in the Prehistoric era in which she resides more comfortably. Of course, things don't answer her real need, and Zarabeth shouldn't have had to point this out. She asks for a child to assuage her loneliness, and requests that Kirk fuck her, so as to increase her chance of becoming pregnant. Kirk accedes to this request, but how does he behave? Is he gentle and caring toward Zarabeth? Not a bit of it. During the entire sexual encounter he thinks of Spock and identifies with Spock in pon farr. He feels himself as an uncontrolled rutting animal. That is his image of Spock surrendering to passion. He wants to be fucked by Spock, but for the moment seeing himself as Spock suffices. This total identification with uncontrolled Vulcan manhood makes Kirk brutal in fucking Zarabeth—much more brutal than he would normally have been in fucking a woman. It seems to me that this would have caused Zarabeth pain, but Kirk shows no recognition of this. I understand that Zarabeth is using Kirk in this story, but I still don't like to think of Kirk s the kind of man who would hurt a woman without even giving it a thought. We aren't shown how Zarabeth feels either. There are no physical or emotional consequences to Kirk's brutality. Zarabeth is portrayed as being solely concerned with whether the K/S relationship will remain intact. Such magnanimity! She is the indestructable all-giving Earth Mother. No pain can touch her. I submit that this is as unrealistic as the stories that fans condemn so widely where either Kirk or Spock sexually abuses the other without any permanent damage to the K/S relationship. If brutality in anal intercourse is an evil to be avoided, then the same should hold for brutality in vaginal intercourse. Let us affirm sexuality through K/S. If all sexual intercourse described in K/S cannot be loving and non-abusive, then let us at least remember what caring sex can be life. If writers must deal with rape and abuse, I find it referable that they do so with insight, and take an ethical perspective toward it. Yet it is always more pleasant to read stories in which fucking is consensual and eminently pleasurable for both partners. K/S is a genre where you can find an entire range of attitudes toward sexuality. At one extreme, some writers are dealing with sexual intercourse as a transcendent spiritual experience, and at the other extreme some writers haven't even conceded that sex is fun. I value diversity of ideas, but I think I have made abundantly clear where I fit in this spectrum of opinion. I do oppose censorship and uniform standards of political correctness, but I will always favor love over violence, and caring over insensitivity.