Fantaises is a Star Trek: TOS K/S story by Beverly Sutherland. It has art by Caro Hedge and Caren Parnes.

It was published in Nome #8. 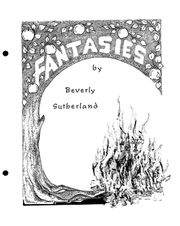 This was one of the stories that was to have appeared in the proposed zine "Best of Nome" #1.

Discussed in Not Tonight, Spock!

"After McCoy sees a show being shown at an exclusive menʼs club of Kirk and Spock portrayed as lovers, he has them see it without telling them what itʼs about."

"McCoy is deep into research on the Pon Farr, fearing for Spock's life when it happens again. He feels Kirk and Spock are already paired without realizing or admitting the fact. The problem is how to get these two dear friends to come to the same conclusion. McCoy learns that an establishment on Wrigley's planet is featuring a pornographic halo film in which the two lead actors could be doubles for the Captain and Spock. After McCoy investigates personally, he arranges for Kirk and Spock to attend a performance. This, he hopes, will open their eyes."

It ought to be pointed out, however, that someone who is feeling tense or has some degree of ambivalence about being penetrated is likely to have a tense sphincter muscle as well. The whole body tenses up in such a state. Kirk is often shown having trepidations about being fucked that first time. If he's nervous, no wonder it hurts. The most sophisticated writers have Spock or Kirk, if he is the penetrating partner, probe the sphincter before entry. Such a probe can tell a partner whether the sphincter of the other is too tense to proceed. There are ways to relax it by massage, or by alternately clenching and releasing the muscle. Progressive relaxation can also be achieved by exercises involving penetration by larger and larger dildoes [sic]. This is especially useful when a particularly large cock needs to be accommodated. Never once have I seen an uptight Kirk or Spock doing sphincter muscle exercises to improve responsiveness in a K/S story. Though in "Fantasies" by Beverly Sutherland (NOME 8) Kirk reveals that he knows that being fucked is enjoyable from having been fucked by a female prostitute using a dildo. The issue of a large cock possibly being painful is also brought up by Kirk in "Fantasies" when he says, "You might be bigger than a dildo, but you won't hurt me more, or give me less pleasure." This story is about as sexually sophisticated as I have ever seen in K/S. [1]

Pon farr raises its ugly head in Beverly Sutherland's "Fantasies". It is 7 years since Spock's last &, despite McCoy's best efforts, the good doctor is running out of ideas for an 'antidote'. An overheard conversation causes him to visit an establishment where the stars of a homosexual hologram show strongly, & presumably deliberately, resemble his Captain & First Officer. Watching the various fantasies starts to convince him of the possibilities &, with pon farr soon to be upon them, the potential benefits for both men. To this end he consults Satik, Spock's clan cousin & a healer, & is encouraged. With some doubletalk he persuades Jim & Spock to go & watch the show & off they go. Now I recognise Beverly Sutherland for the talented writer she is & so I was a little disappointed in this story - not because it isn't well written, it is, but because to my mind it is based on a shakey premise from the beginning. In a conversation with a colleague, I outlined the plot & her comment was, 'It's not right is it? What do you think McCoy would have done?' "Send Kirk on his own." 'Exactly' Just precisely how wrong McCoy is, is borne out by the fact that Spock, having fled from the hologram, ashamed of his arousal, comes within a second of plunging a dagger into his heart. Kirk is lucky enough to stop him - but it is luck; with that margin it couldn't be anything else. What follows is beautifully erotic & sensitive in characterisation - Kirk especially - but if I'm honest I would look to Beverly Sutherland to produce something perhaps a little less run-of-the-mill, something more forward looking. The fantasies chosen are interesting, however, mirroring, as they do, one or two of those prevalent in K/S; slavery & violence, beaches, baths...Perhaps it bears out what I suspect, that in some stories Kirk & Spock could be interchangeable with...er in this case, Kal & Rod Biltmore (!). [2]

"Fantasies" by Beverly Sutherland is excellent for its originality and psychological insight. The attitudes of Kirk, Spock and McCoy reflect internalized homophobia, but its fascinating to see them work, through it. The sex show with the actors playing Kirk and Spock is a good device for bringing attitudes to the forefront. It is itself analagous to K/S fiction. K/S fiction is based on an original that didn't contain that sexual level of relating, and its legitimacy is continuously under challenge — sometimes from K/S fans themselves who are insecure and ambivalent about this idea of Kirk and Spock being sexual partners. So Beverly, in writing this story, is presenting a dialogue or dialectic on the nature of K/S writing. Is it a fraud and a slander, as some maintain? Or does it reflect are a linear connection between Kirk and Spock that only K/S fans can perceive? "Fantasies" thus has a subtle, multi-dimensional quality that I can appreciate. [4]

With very little time in which to read, and a mood that made be want to read something with a more subtle approach, I sought out an old favorite: NOME.

But the story that fell into my hands is one that, while quite memorable, doesn‘t fit the definition of subtle at all. It is, however, one that sticks in my mind from previous reads. There have been many stories written where Kirk and Spock discover or reveal their love for each other because of some contrivance, but this must have been one of the first and most believable, or at least best-described.

While the Enterprise orbits Wrigley‘s, McCoy learns there is a show at one of the establishments that may be embarrassing to his commanding officers, so he heads down for a look-see. What he finds is far more than he‘s bargained for. In an elegant and classy club called Man Two Man, he views a holographic dream sequence of two men who very much resemble James Kirk and Spock. As he watches, he becomes both angered at the audacity of the producers and encouraged by a possible solution to a problem. You see, McCoy knows these men love each other but have not yet admitted it, and he also knows that pon farr is soon going to be a problem for Spock once again. His research has found no solution other than the obvious one of finding a mate.

Subtle is not the result. Kirk is aroused and Spock is nearly catatonic, until he abruptly and violently exits the exhibit and beams back to the ship with Kirk close on his heels despite an attempted nerve-pinch. I would not describe the seduction that takes place to be subtle or even two-sided, but it is effective.

There is a lot to like about this story. The descriptions of the pleasure planet‘s questionable facility and the reactions of the three who view the exhibition are very well contrived and believable. It‘s a risky way to get Kirk and Spock to recognize and admit to their feelings, but as you might expect – it works! [6]