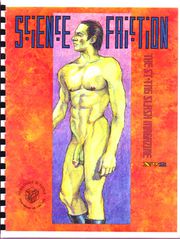 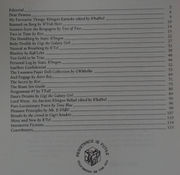 Science Friction is an explicit slash Star Trek: TNG anthology which highlights the homoerotic subtext of the Borg episodes.

Most long-term media fans disliked it a great deal. This led to much discussion about the difference between erotica in media fandom vs. professional erotica/pornography of the time.

Mark Dery, a cultural critic who studies fringe computer culture writes in Slashing the Borg: Resistance is Fertile, an essay that quotes this zine extensively:

In 'Science Friction', mechanical reproduction is strictly X-rated. The Toronto-based queer 'zine is devoted to campy, techno-porn burlesques of Star Trek: The Next Generation's 'Borg' episodes... The 'zine features panting tales of RoboCopulation, pornographic 'Sonnets from the Borgugese,' and 'heart-stoppingly explicit illustrations,' spiral-bound and sealed in a 'plastic splash guard cover' for your one-handed reading convenience. 'Science Friction', whose battle cry is 'If Paramount can't give us that queer episode, just make it so!,' is a textbook example of extual poaching ---a sort of guerrilla semiotics in which consumers-turned-producers perversely rework popular fictions.

The comments below are from the media slash apa Strange Bedfellows.

"What is slash?"? Is this a trick question? At one time it had to be about Kirk and Spock, and then it had to be about either Kirk/Spock or Starsky/Hutch, and then it was about good buddies (as long as they were really good buddies and heroic besides) in an action, preferably SF, screen show. Then B7 came along and slash was any pair of same-sex close friends or real close enemies who made moves toward going to bed, whether they professed love or not. Hetero couples could do the same by then (once in a blue moon) but they didn't call it slash. At one time I tried to promote calling slash-style male/female stories "slash," but nobody would go along. They didn't even lecture me patiently on how that wasn't slash or this other thing was slash, they just never did it, so I'm not going to bother with that issue anymore. Fans intuitively don't wanna. Nowadays slash is anything with a gay relationship in it somewhere, seen from a fannish perspective. Some hint of preexisting media characters is a good clue as to fannish perspective, but not definitive. Patalliro!, itself media rather than fanfic, sure looks like slash to me. The opposite case involves a privately-produced anthology of stories and art using the TNG characters, titled Science Friction. I hope [N] will describe this in lurid detail, as I couldn't bear to examine it closely. It was being sold (out of a room) at Gaylaxicon 4, i.e.,among SF fans, though I can't say whether the producers were familiar with zine—and—writing media fandom. It resembles gay pornography in the ways that that genre is most different from good slash fanfic. [Is it] slash?

...if you saw and remembered Science Friction, what would you call it? It's never been a point of definition for me, but I gather some readers see SF-shows' slash as more or less possible than here-and-now-shows' slash, I presume because the future setting alters the social definition of taboo gay behavior. Gay behavior need not be taboo at all, for instance. It's less that the background society in an SF show might be postulated as tolerant of homosexuality, but that the background is, by definition, not defined. [1]

Has slash been changed by the people that have come into it through hearing about it in academia or the press?" you ask. Well, since that's how M. Fae found out about it, the answer would have to be a joyous "yes!" Is there anyone else we know who came in that way, and who has had an effect on fandom? I know a couple of women graduate students at Ontario University (I think; I know they're Canadian), who found out about slash through Henry's work and are putting out a porno Trek zine, mostly for their local gay sf group. [B], you met them with me at Gaylaxicon several years ago; they were the ones with the huge zine, 11" by 14" or so, bound in hard covers. I saw their second issue at the Berkshire Conference on the History of Women, which one of them was delivering a paper at (as was I), and it's more of the same, although normal-sized. They're clearly coming from more of a gay-porn stance than a fanfic stance, and have little interest in interacting with a larger fannish community, or in learning the unwritten motes of fan fiction and media fandom. (Their second issue included an S/M Beverly/Guinan/Ro story which was passably well written, but which made no sense at all for the characters. I told them so, and they agreed that the author was just sticking convenient Trek names on her own fantasy figures, and they had no problem with that. I did.) [2]

... let me put in my two cents worth about Science Friction... SF is a slim Next Degeneration slash zine that made an appearance at last year's Gaylaxicon. Perhaps "slash" zine would be more appropriate because (to completely misquote but you'll know what the hell I mean) if it looks like a duck and walks like a duck and quacks like a duck, is it a duck? SF has all the form and none of the substance of slash. Certainly it couples media characters in same sex

Anyhow, in regard to corruption, my initial response is to wonder (barring legal conflicts, another topic) how [academics and other "outsiders"] will corrupt [slash]. If they consume, they can vote with their dollars (or the monetary unit of their choice) just like the rest of us. But it is the people who produce that ultimately shape zine fandom. And once other folks start producing I get really uncomfortable drawing lines that say she is a fan and she isn't. If they produce Science Friction I'll read and laugh, and treasure the Glaswegian's discussion of the literary merits of the zine, and not buy issue number two. If their stories are good, I'll welcome them with open arms. [4]

While I agree with [N] and others that what they are writing is not slash in any meaningful sense of the word, I don't see what harm is caused by them writing what they are writing. Different fantasies, different rules, different contexts, different conventions, different tastes. So what? Why do you have a problem with that, exactly? As far as I can tell, apart from peddling it at Gaylaxicon, not a major slash mecca, they aren't really selling it within the slash community. In any case, I can point to stories in Frisky Business for example which also seem to be putting convenient series names on their own fantasy figures. [5]

I obtained a copy of the first edition at Gaylaxicon a couple of years ago, plus I also had a fairly long discussion with one of the editors. He said that the writers were male and female of varying sorts of queerness. He said (as does the intro) that the zine arose mainly as a response to the STAR TREK producers' refusal to put in openly queer characters in the aired ST:TNG series. I really don't find the stories very much different than the PWP stories in various other slash zines, particularly those in FRISKY BUSINESS and in some of the DYADS and PLAYFELLOWS.

Much of the poetry was romantic in the traditionally "slashy" manner, particularly the Klingon haiku.

LOCUTUB tried to have emotion, especially of horror. But the writer erred in describing the emotion too much rather than showing it — a common error which could have been corrected by good editing.

The zine may have been intended to be a parody, but I didn't think it was especially amusing. I also don't recall any stories dealing with "romance and infatuation". More like lust and obsession, and not very well done either. However, I do agree that the stories were not all that different from slash published in Frisky Business and other "real" fanzines. I consider SF to be slash, its just lousy slash. [7]

Science Friction 2 was published in 1993 and contains 117 pages.