Sanders Sides is a YouTube web series created by vlogger Thomas Sanders, in which he has group meetings with personifications of different aspects of his personality (Morality, Logic, Creativity, Anxiety, etc) to work though issues in his life and understand himself better as a person. It has been stated in canon that the Sides are different aspects of a single personality (known as Character Thomas), not multiple personalities. Thomas Sanders himself normally plays all of the roles, however there have been episodes where the Sides were portrayed by his friends, cartoons, and puppets. So far, there have been two seasons.

The original three Sides (Teach, Dad, and Princey) originated from characters in Thomas's Vines and Shorts videos, but are considered separate characters than their Vine/Shorts counterparts.

Thomas Sanders began publicly confirming that he was gay in late July 2017. The first season of Sanders Sides was released before Thomas officially came out - any reference to his love life in those episodes was kept deliberately vague (or in the case of "Alone on VALENTINE'S DAY!", a female love interest was portrayed by Thomas's friend Valerie).

The Sanders Sides are personifications of specific aspects of Thomas's single personality, each represented by a different character, who try to help Thomas through life problems. There are currently six Sides, each with their own color scheme and official logo (more may have yet to be revealed): 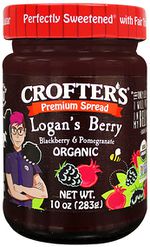 It began as a joke, a throwaway line in "Fitting In (Hogwarts Houses!)":

Logan: OK look, fantasy is not my jam, my jam of choice *pulls up a jar of jam* is Crofter's, and this video isn't even sponsored, I'm just a fan. Crofter's, the only jelly I will put in my belly.

Roman: Yeah, I mean *pulls up his own jar of jam and a spoonful of jam in the other hand* I love me a spoonful of Crofter's, but that was a little out of left field, Logan. *eats the jam*

The fandom ran with the idea, with fans talking about how Crofter's should sponsor Thomas's videos.

"Crofters - The MUSICAL!" revealed that all the buzz in the fandom had led to Thomas and Co. being in contact with Crofter's, and together they launched a special limited edition new flavor, "Logan's Berry". Thomas's online store sold jars singly and in multi-packs, as well as a t-shirt with fanart of Logan with the Crofter's bear along with the quote "The only jelly I will put in my belly."

Logan/Crofters also became a ship in the fandom (see "crackships" below).

While all of the Sides are technically aspects of a single personality (and therefore Clonecest or "selfcest"), there are some familial undertones to certain relationships. Patton/Virgil (Moxiety) is one of the more popular pairings in the fandom. Despite canon evidence of a father/son relationship, the majority of the fandom doesn't see Moxiety as incest, possibly because the pairing was shipped by the fandom at large before the paternal relationship was cemented in canon. Remus/Roman (RemRom), however, has recently been shunned by much of the fandom as incest or twincest due to Remus being compared to Roman as a "brother"/"twin" in canon.

Sanders Sides, Cartoon Therapy, and the Sanders Shorts all exist in separate universes, however many Sanders Sides fanfics include these characters. The most common of these are Dr. Emile Picani and Sleep "Remy" Sanders (Ship name: Remile). Thomas's friends who have guest-starred in his various works are also often included as side characters in fanfic (including Joan, Talyn, Valerie, Terrence, and Jamahl).

There are some fanfics that pair one or more sides with the main character "Thomas", but these are more rare than pairing the sides with each other.

(This is a list of the more common pairings with ship names. For a complete list of pairings and ship names, see the list of all possible Sanders Sides pairings)