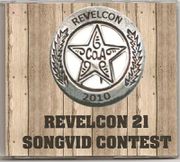 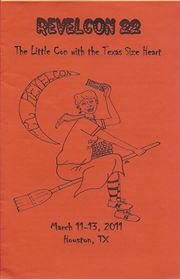 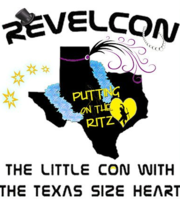 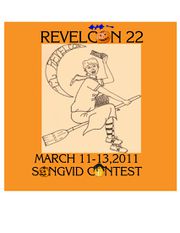 "I flew back to Atlanta yesterday after spending the weekend in Houston, TX at my first ever Revelcon (where a good time was had by all. Thanks much, ladies). Not only was the con lots of fun, but so was the local shopping, and the restaurants were great. Turned out the hotel restaurant was being remodeled, so that meant lots of eating out. Canyon Cafe, Maggiano's, Sweetgrass; all were good and Canyon Cafe was so good we went twice."[2]

A list of all the Video Room Programming for Revelcon 2012 can be found here.[3] 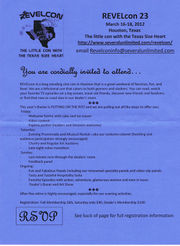 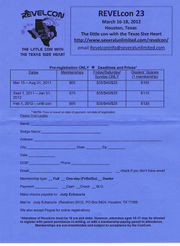 There were only sixteen songvids at REVELcon this year, but there were a lot of really good ones!

I got a copy of the ballot from Jamie, who ran the vid show, so I could remember what all the vids were. The ballot has them by category rather than in the order shown, so my list won't reflect the actual show. Jamie did a nice job mixing them up so we didn't get all the funny ones or all the dramatic ones in a row... I don't have comments on every single one, but there were quite a few that I liked a lot.

The H5-0 "Friends" vid was to a hilarious song by Flight of the Conchords, and the vidder made some awesome clip choices. For example, on the line "friends don't let friends do crack" she shows us Danny freaking out when Steve is dangling a suspect off the edge of a building (from the pilot, I believe). I'm guessing that "Hip to be Square" by the same vidder was similarly clever, but alas, I'm not familiar with Chuck.

It took me a few minutes to place the source of the song Zero to Hero - it's from the Disney version of Hercules - but it was a splendid choice for Daniel Jackson's character arc. The vidder chose to use pertinent clips from the original Stargate movie as well as the series, and I thought they worked very well. "Romeo" was a cute and funny vid featuring sexy guys from several fandoms like Angel, Spike, and Mulder.

The first vid listed under "drama" was actually fast-moving and amusing; I haven't seen very many White Collar vids, but I enjoyed this one a lot. "Fandom Mine" was the first of several unusual and beautiful vids by Holdt; this one featured a voice-over that sounded like it might have been dialogue from the series (I haven't seen enough episodes to be sure) with instrumental music and some words - one or two at a time - on the screen. I'm trying to remember what they were - mostly abstract ideas, I think - but I thought they worked really well with the music and the clips and the dialogue to create an intriguing collage.

Jamie's "Pacing the Cage" was nicely bookended by clips of the black panther pacing back and forth, reinforcing the theme of Jim's sense of being overwhelmed/trapped by his own abilities and the role they thrust him into. It was a well-done character study. I talked with her about it afterwards and she mentioned her concern that she used too many often-vidded scenes, and I shared my impression that because she was repurposing the clips to tell a different story than most Sentinel vids, even the familiar clips didn't have that "same old" feeling.

OneofAradia's "Living on the Edge" was enjoyable, and where it touched on episodes and arcs I recognized, clever and thoughtful. It's a longish song and seemed to drag a bit near the end--then again, I have a short attention span--and I suspect it might work better as a living room vid, especially because there seemed to be some really interesting clip choices whose significance I missed, since I haven't seen all the episodes.

The slash humor vids were also fun. Kat-byrd turned in a terrific matched set of Beatles songs, with "Help!" being from Doyle's POV and "Hard Day's Night" from Bodie's. I especially liked how, in the former, she used special effects to echo George Harrison's ringing guitar. Her Starsky & Hutch vid didn't entertain me as much, but then I'm not really into S&H. Ann Walton's two humorous Sherlock vids, as well as her serious one, both used the unusual technique (well, for nowadays--according to Kandy Fong, songvids originally began in the form of slideshows, before there were VCR's) of dissolving still pictures instead of using video clips. This enabled her to use photomanips and fan art as well as actual screen captures, which she did especially well in "Sexy Thing." (The humor in the other one, I thought, depended more on the excellent song choice, although the images were well chosen.)

There were only three slash drama vids. Holdt contributed two more, once again creating fascinating collages. "In Shadow" interpolated stills and clips from what looked like tasteful gay erotica, blending them into the narrative so that they came across as Jack's hidden desires (if I'm reading the video right). "Unanswered" used a whole lot more text on the screen than the earlier "Fandom Mine," as well as a song with lyrics, the juxtaposition telling a sparse, sad story.

Finally, Ann Walton's "My Confession" plausibly got into Sherlock's head; it was more restrained in the use of photomanips, which I thought was more appropriate to its serious tone, but the final kiss was all the more poignant since we know it didn't really happen onscreen.

I don't know if they'll put out a compilation DVD, but if they do, I'm gonna get one! I thought this was a really fine collection. [4]

15 vids were submitted. The winners of the songvid vid contest were:[5] 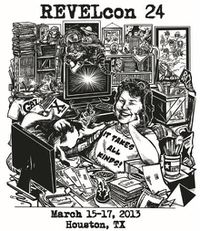 Portrait of Candace Pulleine used on the 2013 Revelcon t-shirt, Art by Sherlock

Revelcon 24 is scheduled for March 16-18, 2013 and the theme will be "Sleeping With The Stars: During the day, come dressed in your favorite celestial tshirts or whatever - and for our nighttime activities, don your PJ's for our weekend long slumber party." 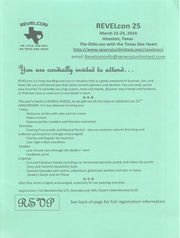 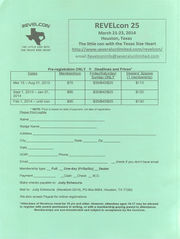