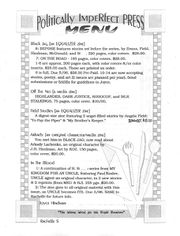 Politically Imperfect Press was run by Rachelle S. and Hindman. There is some crossover publications with Secret Pleasures Press. The press, a sister press of Impress Books, published original fiction such as the "In the Blood" and "Invisible Ink" series, "FTL", and "Scoundrels". This zine publisher also has a branch-off press called No Name, No City.

It published gen and het fanfiction, primarily the "Black Jag" Equalizer series, Man from U.N.C.L.E., and other media fiction zines.

Its name was derived in part as response to being told what to publish or write in fandom by various other fans. As printed on business cards and elsewhere it was officially "Politically ImpeRfect PRESS".