Pavane is a slash Star Trek: TOS anthology fanzine published in the UK by Chris Isher. 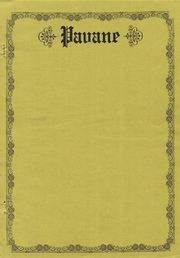 It contains three illos. Two of them are by Sue Humphries. One is a page that includes a photocopy of a Gayle F illustration.

The pagination is confusing; some stories have page numbers, and others do not. This is because it appears that each author typed up their own contribution and the editor compiled them.

The zine originally contained "a packet" that had a letter of comment form, information about a raffle regarding the Gayle F illo, and Sue Humphries' story, The Passage of Time. Some issues may now be missing this packet.

Welcome to the first issue of a new British K/S zine. The name has been chosen on 3 counts.

1) My dictionary defines the word Pavane as " a slow stately dance for couples" (which seemed highly appropriate);

2)It therefore allows me the chance to pay tribute, by way of continuing the musical terminology, to both Voice and Star Trek: TOS zine)|Duet;

3)It was the title of the very first fantasy-style SF novel I read - P'avane' by Keith Roberts - and from which I've taken the spelling, as there are several other forms e.g. pavan, paven, pavin!

Now, British K/S -- definitely, but one feature it is hoped to include in any future issues will be overseas guest contributors. In Issue One these are Elke from Germany with 2 delightful short stories, and Gayle from the U.S.A. (see Raffle details). My thanks go to both of them, and of course to all the home-based authors who responded so magnificently to the call for stories.

The chosen Charities are the World Wildlife Fund's Whale Project (which I feel very strongly about, and I was Greenpeacing over a decade ago!) and London Lighthouse - the AIDS hospice. The raffle especially is for charity, so please buy 'loadsatickets'.

The Enclosures pack. Together with the Raffle sheet, you will find a Letters-of-Comment form. Besides helping me, as a Brand New Editor, to provide more of what you really want in Issue Two, the authors are very keen to have LOC's on their work. So please complete this form as and when you can - let us know your opinions.

The last item in this pack is a Sue Humphries story "Passage of Time". Her introductory comment speaks for itself,but here is the editorial Health Warning, for any of you out there who are devoted WS fans. Don't read it, if you are prone to sense-of-humour failures!!

Hope you enjoy the first PAVANE.

See reactions and reviews for The Passage of Time.

See reactions and reviews for Planet of Shame.

Pavane 2 was published in March 1990 and contains 157 pages. It contains two illos by F. Falkenheim. 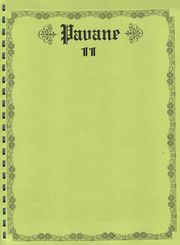 front cover of issue #2
From the editorial:

Welcome to the second issue of PAVANE -- the new British K/S zine. Response to Issue One was most encouraging to myself as Editor and to the authors and illustrators, and we were particularly delighted to have LOC's on your reactions to the stories. Please keep them coming for this one.

Also, of course my deepest thanks to all the Contributors, literally without whom... The standard of their work is as high as ever, and I hope the variety of themes appeals to you, the Readers.

Finally, the enclosed Flyer gives details of a single-story zine Dragons, with will be published in Sept this year 1990, by Pavane & Galliard Press

With best wishes for your enjoyment of Pavane II.