From Fanlore
(Redirected from Otherwhere, Otherwhen)
Jump to: navigation, search

Otherwhere/Otherwhen is a K/S slash Star Trek: TOS zine series for Alternate Universe stories. It was published by Pon Farr Press between 1990 and 1993 and has three issues. 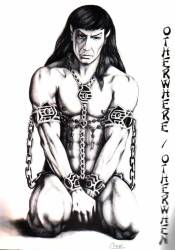 cover of issue #1, Marilyn Cole: "This gorgeous cover of a kneeling, bejeweled Spock is famous among all K/Sers who have gazed upon this sensuous long-haired Vulcan, resplendent in his jeweled accouterments that are deceivingly chains of a prisoner."[1] Another reviewer commented: "...he size of this resolution does NOT do justice to the power and the beauty of this illo...everytime I look at it, something comes over me, I swear. For one thing, Cole has seamlessly reproduced Nimoy's face...I'm not kidding, it's virtually a photographic simulacrum...and those chains draping Spock's muscular form...it's like a dream . A WONDERFUL dream....always love artwork for slavefic/AU stories, even if slavefic is not a particularly strong draw for me, personally...but the art sure as heck is!"[2]

[front cover art] This is the cover to Otherwhere, Otherwhen #1...it's by the amazing Marilyn Cole, and the size of this resolution does NOT do justice to the power and the beauty of this illo...everytime I look at it, something comes over me, I swear. For one thing, Cole has seamlessly reproduced Nimoy's face...I'm not kidding, it's virtually a photographic simulacrum...and those chains draping Spock's muscular form...it's like a dream . A WONDERFUL dream....always love artwork for slavefic/AU stories, even if slavefic is not a particularly strong draw for me, personally...but the art sure as heck is! :D[5]

See reactions and reviews for The Captain's Boy.

See reactions and reviews for House of One Thousand Jewels.

See reactions and reviews for The Trolian Bridge.

See reactions and reviews for Lost in the Mirror.

See reactions and reviews for Their is Always Hope.

See reactions and reviews for Thirst. 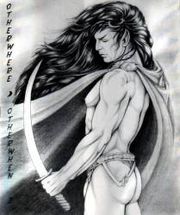 cover of issue #2 by Marilyn Cole: "A gorgeous Spock fantasy warrior nude on the front. It's the type that lingers in your memory. Spock is sexy and muscular as usual. This picture is different because of all the flowing curves. The sword curves, his cape curves, his buns curve (of course), and his hair curves and flows. I think this is one of Cole's better works. I would like to own it... even though I couldn't display it." [6] 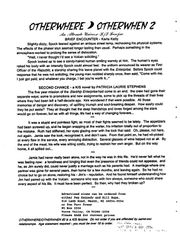 Otherwhere/Otherwhen 2 was published in 1992 and has 162 pages. Art is by Marilyn Cole and Jamie Belle. 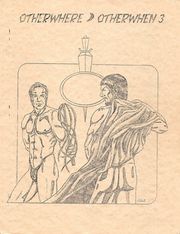 Otherwhere/Otherwhen 3 was published in May 1993 and has 156 pages.

NOTICE TO COPY SHOPS: THIS BOOK IS COMPRISED ENTIRELY OF COPYRIGHTED MATERIAL! IT IS A VIOLATION OF LAW TO COPY THIS BOOK WHOLLY OR IN PART!

This issue also prints a copy of Open Letter to Fandom by Alexis Fegan Black Regarding Zine Pirating.

The editorial is one that was also printed in 5 of Hearts.

For those of you who have read my letter on zine pirating (May, 1993 issue of THE ZINE CONNECTION), you know how I feel about this practice and you know why. For those who haven't read that letter, let me simply say that zine pirates are putting us all in serious jeopardy. Yes, even you. As a reader of K/S, you want new zines, right? What you may not realize is that, in order to produce new zines, an editor has to be able to sell the zines she has already printed. In "the good old days" (let's say 4-5 years ago), an average print run of NAKED TIMES was 400 copies (down from 500 copies in "the golden ages" — 'smile'). That has now dropped to less than 150 copies and is steadily declining. Based on reviews and comments I receive through the mail, I don't think it's the quality of the zine itself. Nor do I think it's entirely due to the fact that I'm admittedly sometimes slow in filling orders. My zines are widely available at conventions, and they aren't selling "in person" either. And after hearing from a fellow editor some of the things going on at conventions, I'm not surprised that the zines aren't selling.

In short, it has come to my attention that a lot of people will buy one copy of a zine at a convention and then run it down to the local copy shop to make multiple copies — which they sell to their "friends" at their cost. This may seem like a fine deal on the surface, since you can often buy a zine for half of what it would cost to buy it from the editor. But, what these people aren't taking into account is that the editor is the one getting screwed — big time! Since the editor doesn't pay only for printing, but must also recover all the other costs involved with producing a zine, the original copy of the zine does cost more. As an editor, I'm paying not only for printing, but for contributor's copies (often 15 or more!) half-tones on cover artwork (which often run $35.00 each or more); office supplies; supplies for the laser printer; shipping of zines to and from the printer; postage to send the zines to an agent at a convention; agent's fees for selling my zines; and so on. So, in other words, I cannot "compete" with the gals at conventions who set up copy machines in their rooms or go to the local copy shop and sell my zines at their cost. Obviously, if I can't compete, I can no longer do zines and I will have to fold — after over 12 years of publishing. People like to complain that "zines are too expensive", and thus they justify buying them from a friend at her cost. In the end, what's happening is that the editor is providing fandom with a zine master instead of with a zine. And if that's the case, I know a lot of editors who will be folding up shop very quickly. A few years ago, there was a major problem with mass pirating — i.e., little shits who would photocopy everybody's zine and sell them openly at conventions. We've been largely successful in discouraging this practice (mainly through loud confrontations at conventions where the pirates were unable to justify their actions in front of a crowd). Now, unfortunately, the pirating seems to be primarily people who are xeroxing "for friends". But, please, consider this: if only 20 people in all of fandom are each making 5 copies of a zine for their friends, the editor just lost the sale of 100 copies. I know for a fact that this type of thing went on at this year's REVELCON. (Recent correspondence with Candace Pullein, however, has reassured me that the con committee neither knew about this nor condoned it — and they are actively seeking ways to prevent and discourage it at future conventions). Fans would purchase one copy of a zine from my agent and then take it to the local Kinko's (we have verification of this by the manager of Kinko's — so we do know the names of some folks who are doing this), where they would make 5 or more copies to sell or give to their friends. Guys, figure it out. Whether you're the one doing the xeroxing or the one buying from your friend, you're killing fandom. It really is as simple as that — and sooner than you think, you aren't going to have any zines because editors won't be able to produce them. Unfortunately, zine production is turning into a venture not unlike shareware software for computers. In theory, even though shareware is free, if you use the program, you're bound by the honor system to send the publishers of the program the user's fee. I can see a time down the road when editors are going to start asking for similar concessions — i.e., if you received the zine photocopied from someone other than the editor, maybe you should send the editor the cost of the zine (or at least the same amount you paid to the pirate). I am not suggesting this as an alternative, because we all know only too well that the honor system usually isn't (which is why many shareware companies fail and why zine fandom will soon fail, too). All I'm saying is that I can and do see the end of the road for zine fandom crystal clear. It's a wonderful hobby and it's been part of my life for many years, but if sales continue to be as poor as they've been for the past 2 years, I will be ceasing publishing at the end of this year. We'll see. Finally, to those who have always been supportive of zines and editors, please be aware that you're appreciated. In the hubbub of trying to deal with the negativity, it's easy to forget about the good people out there who do make a difference. Again, to anyone who has purchase this zine from me or from one of my agents, I do thank you, and I hope more people out there will learn a valuable lesson from your example.

PS — Editors might want to consider including a copyright warning on each page, since copy shops are leary [sic] of getting sued for infringement of copyright. In future zines, this will be my practice — just as the headers on OTHERWHERE/OTHERWHEN #3 now give the title & author, future issues will have a similar header stating: COPYRIGHTED MATERIAL - DO NOT PHOTOCOPY. Any editors with the ability to use headers & footers might want to incorporate this practice. It won't stop 'em, but maybe it'll slow 'em down.

See reactions and reviews for Beauty and the Vulcan Beast.