Nirvana was a very popular American rock band active from the mid-1980s to the mid-1990s. The band broke up following the suicide death of lead guitarist, singer, and songwriter Kurt Cobain in 1994.

The band's fandom is broad and international, with a small subpopulation of fans engaging in transformative fandom, including writing fan fiction, creating fan art, writing non-fiction analysis (meta), and performing cosplay. Nirvana's transformative fandom is diffuse and also international, with hundreds of fanworks available in at least six languages spread across more than a dozen websites. Fans have been writing and posting Nirvana fan fiction online since at least 2001.

Some related fandoms, which are occasionally crossed over with Nirvana in fanworks, include: Foo Fighters, Pearl Jam, Soundgarden, Hole, and Guns N' Roses. There is currently (2018) no cohesive community of fans making Nirvana fanworks in a central location, with fans often unaware of the existence of other fanworks and fans on other websites.

There has been a small community of Nirvana fans writing RPF since at least the late '90s, with the earliest known stories being posted to FanFiction.net in October 2001 (no record of earlier stories remains). As of June 2002, there were 61 Nirvana stories on FanFiction.net. Most of the early stories were single-chapter gen fic. Stories available now (2018) encompass gen, slash, het, and multi.

The "Princess Kurt" trope, as seen in YouTube comments.

The broader fandom leans towards the deification and masculinization of Kurt (he described himself as "feminine"). Surprisingly, there doesn't seem to be much woobification of him in fic, despite the vast potential for this. This seems to happen more often in fan art, where artists sometimes focus on Kurt's on stage preference for wearing dresses and depict him as small, fragile, and with female-looking anatomy. There's even some cute fanart of him with tits (link to that: Some of the broader fandom has dubbed this aspect of Kurt's personality "Princess Kurt" (see image). Dave is also sometimes characterized this way, but Krist almost never is. (Example of fanfiction with Princess!Kurt: Oh No, I Know A Dirty Word by kreepykunt, 2018.)

There is quite a bit of darkfic, non-con, whump, and H/C, with Kurt as the typical target of abuse and Krist and Dave in either protector or abuser roles. Krist is often written as comic relief or the loyal best friend side character, Dave is frequently the submissive to Kurt's dominant (although it's sometimes the other way around), and Chad and Pat are sometimes characterized as villains, when they appear at all.

Suicide fic is a very common trope in this fandom, as might be expected. Fans who deal with the dark side of the band tend to write very serious pieces of introspective angst, with most such stories being gen and focusing solely on Kurt. Another popular theme is high school AUs, typically where Krist, Kurt, and Dave all attend the same high school together. This theme is most often found in het chapter fic.

Canon women tend to appear as likable supporting characters in many of the longer chapter fic, and occasionally as villains. There is a small amount of domestic fic, with Kurt, Courtney, and Frances (and sometimes featuring large amounts of angst and chaos).

Many fan fiction stories about the band are gen fic, with no romantic or sexual relationships featured. Some are slices-of-life, others are AU adventures, crackfic, or mood pieces. Most of these are focused on Kurt's death, and some feature members of Guns N' Roses.

A large subsection of Nirvana fan fiction is slash fiction, pairing members of the band with each other or with the male members of other bands, especially Guns N' Roses. Dave/Kurt is the most popular in-band pairing and Axl Rose/Kurt is a popular crossover hate!pairing in Nirvana fandom.

Another large subset of the fic are het stories, mostly featuring an original female character and a band member of choice (Kurt is by far the most popular here). Many of these stories are very long chapter fic with significant plot elements besides the romance.

Some people say this was fake blood, since this was a Halloween show, but Kurt's account contradicts this.

Band member Kurt Cobain kept extensive journals through much of his life, in which he recorded poetry/lyrics, stories, drawings, letters to friends, ideas for album art and music videos, playlists, and day-to-day thoughts. He wrote at least one piece about his own band, which may or may not have fictional elements (fans disagree on this point). It was written in the third person, as if by an audience member. See image. Not technically fanfiction, but still.

The members of Nirvana were vocal in their opposition to homophobia and were frequently physically affectionate with each other. They can be seen kissing, hugging, cuddling, and telling each other, "I love you," in various videos and photographs. Kurt Cobain and Krist Novoselic have been described as "best friends" and "soulmates" by several people close to the band, including Dave Grohl. The band also held a benefit concert to defeat a bill in Oregon that would have created a law discriminating against lesbians, gays, and bisexuals in that state.

These incidents provide a lot of inspiration for many writers of Nirvana slash fiction and creators of slashy fan art.

Kurt has been quoted as saying he isn't gay, but wishes he was just to piss off the homophobes. 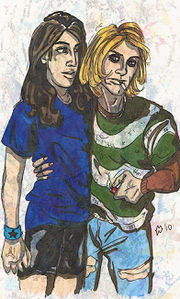 Most Nirvana fan art is gen, featuring no pairings or sexual content. A commonly seen theme is artists depicting Kurt as still alive and spending time with Krist and Dave at their current ages.

Some Nirvana fans create slashy fan art of the band, pairing band members with each other or with other musicians. In-band pairings are the most popular in Nirvana slash art.

Kurt was a visual artist as well as a musician, and he created a number of drawings of his band, some with fanciful elements.

See the last image below.

Velvet Goldmine (film) - 1998 - Todd Haynes, director - This film is primarily about the 1970s glam rock scene in Britain, centering around David Bowie, but the character Curt Wild is intended to be viewed as an amalgamation of Iggy Pop and Kurt Cobain. Several scenes in the film are direct references to Kurt's life or to film clips of him during famous Nirvana gigs. The entire film is highly slashy.

Screenshots from the films and a sample panel from the graphic novel.

Last Days (film) - 2005 - Gus Van Sant, director - A fictionalised account of what Kurt Cobain's final days alive may have been like. The film's characters directly reference real people, or are composites of multiple real people.

Godspeed: The Kurt Cobain Graphic (graphic novel) - 2003 – B. Legg, J. McCarthy, Flameboy, authors - This book is a partially fictional sequential art account of Kurt Cobain's life and his possible reasons for committing suicide. Many scenes are based directly on real life happenings, while others are speculated by the authors. This story features subtle slash elements. 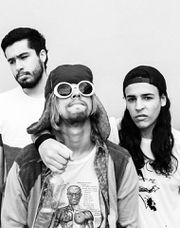 Nirvana cosplay by biel12 and friends

Some fans like to do cosplay, which occasionally ties in with live performance of Nirvana's music. See an example to the right.

Here is a video of Nirvana fan Ramiro Saavedra, performing "Come As You Are" in Kurt cosplay.

There is a very popular conspiracy theory in Nirvana fandom that divides fans, with strong opinions on both sides. Some fans (mostly male) claim that Courtney killed Kurt, and have made professional meta about this topic in the form of films and books. Most of these fans seem unfamiliar with depression, abuse dynamics, suicide, self-harm, trauma, C-PTSD, and other relevant topics, which fans on the other side of the debate have pointed out.

Many men (not necessarily Nirvana fans) also use this conspiracy theory as an excuse to engage in profanity-laden misogynist rants against Courtney, which have little to do with her actions, and much more to do with the fact that she is female. [citation needed] The members of Nirvana spoke out strongly against misogyny many times, which seems to have somehow escaped most of these men. [1] [2]