Are you looking for the multimedia fanzine New Worlds?

Summaries from the publisher. 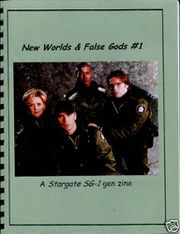 New Worlds & False Gods 1 is 166 pages long and a collection of 12 stories and poems. It was published in February 1999. 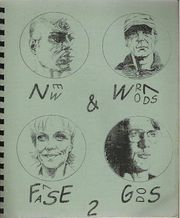 New Worlds & False Gods 2 was published in October 1999, is 200 pages long and is a collection of 15 stories. The cover is by Anja Gruber.

The zine premiered at EclectiCon in November 1999. [1]

[Alliances]: The summary goes: "Anthropologist Jonathan MacKensie has located a dangerous artifact that could spell trouble for himself and SG-1." Now, I've never seen Shadow Chasers, but I thought I would give this a go anyway, in case it just worked if I treated the Shadow Chasers characters just as guest-characters in a Stargate story -- and it did. The opening was particularly cool, as we got to see the Stargate folks from the Shadow Chasers folks point of view, and the interaction was delightful; particularly with reactions where the Stargate people are trying not to let things drop. My favourite parts of this story was the character interaction; the actual action parts (and the inevitable Very Powerful Alien) weren't quite so interesting to me. (And of course we get the not unexpected Ghostbusters reference which the author seems to like to drop in to a lot of her stories). One of the things which made this story work as a crossover was the former encounter between Benedek and Daniel, and how that impacted on the tensions in the plot. As someone said, if you're going to have a crossover, you need a reason for the crossed people to be there, and that was the character reason (as distinct from the plot reason) for them to be there. I liked it. [2] 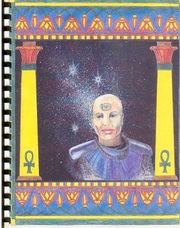 New Worlds & False Gods 3 was published in April 2000, is 136 pages long and a collection of 16 stories and poems. The cover is by Barb Johnson. 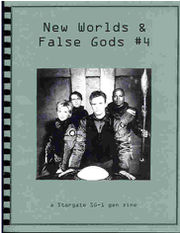 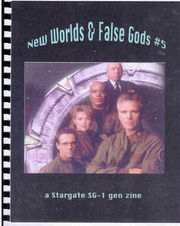 New Worlds & False Gods 5 The cover is by Shiloh. It was published in April 2002 and contains 132 pages.