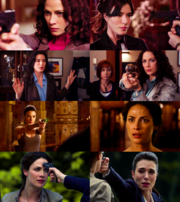 Myka/H.G. is a popular femslash pairing in the Warehouse 13 fandom. Their relationship has semi-canonical status; while it has never been explicitly written into canon, Joanne Kelly (Myka Bering) has stated that she and Jaime Murray decided on their own that their characters were in love.[1]

At one point, speaking at a panel at Comic-Con, Joanne Kelly said of her co-star Jaime Murray, "Jaime is such a good actress and I have so much fun with her. I think it was one of the things that we talked about, how to make the dynamic interesting and different. And so, we fell in love a little bit." [2]

The pairing of Myka Bering and the canonically bisexual Helena "HG" Wells in Warehouse 13 gained popularity following Jaime Murray's first appearance as Helena in 2010, with stories beginning to appear on Archive of Our Own in the days immediately following her first episode. The pairing gained traction as Helena's further appearances often paired her with Myka, and the friendship they shared became important to both of them. Actresses Joanne Kelly and Jaime Murray increasingly played their scenes together with deliberate romantic undertones, making it clear in interviews that they believed a relationship between the two was plausible. Promos put out by Syfy and tweets from the production team also acknowledged the attraction, making fans hopeful for a canon romance.

However, fans were frustrated by the pair's last on-screen meeting in the Season 4 episode Instinct, which left Helena living with a new boyfriend and his young daughter, having begun a new life as a forensic scientist for the police. The episode's jokey throwaway line suggesting a tryst between Myka and Helena in a police station did little to soften the blow of their parting on those terms.

Similarly, in the series finale the next season, one-line confirmation that Helena had left her boyfriend and started to date a woman wasn't of much comfort to Bering and Wells fans who had hoped for a final meeting between the two, although it did at least confirm that they were still in contact. When Myka began a relationship with her colleague and friend Pete Lattimer in that episode, Bering and Wells fans were disappointed, as were fans who had previously enjoyed the show because of the brother-sister chemistry between Pete and Myka and the refreshing lack of forced romantic tension between them as male/female leads.

Following the final episode, members of the cast appeared at a convention Q&A and improvised a short post-series scene in which Myka left Pete and began a relationship with Helena, which was widely shared and realised in the form of fics and constructed reality Tumblr gifsets.

Although disappointment with the finale left some Bering and Wells fans needing space away from the fandom, as of early 2016 the pairing continues to be by far the most popular Warehouse 13 ship, with new fics and vids appearing regularly.