From Fanlore
(Redirected from My Name Ain't Mary Sue!)
Jump to: navigation, search

At one point, a sister zine called "My Name AIN'T Mary Sue: Special Gay/Lesbian Issue" was planned, but it was not published.

According to a submission request in Southern Enclave #38 in 1994:

We're currently seeking stories featuring gay and lesbian Mary Sues for a special standalone, one-time issue. Note: This is not a slash project! We are looking for the same kind of innovative and thought-provoking characters and plot-lines that are the standard for every issue of MNAMS.

My Name AIN'T Mary Sue! is an amateur, not-for-profit fanzine publication created solely for the entertainment of sci-fi/fantasy/media fans like ourselves. All rights revert back to the original authors upon publication.

ITK Press does not intend to infringe upon any copyrights held by any person or corporation whose titles and characters appear within these pages. If you're concerned that we may be making money off of your ideas, rest assured that we invariably end up in the hole. But we have a wonderful time playing in your backyards, and we thank you for tolerating us. 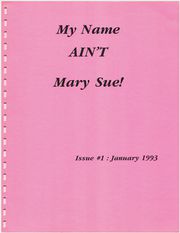 My Name AIN'T Mary Sue! 1 was published in January 1993 and contains 164 pages. It contains no interior art.

The editors mention that this zine began in "an introductory newsletter, published back in August 1992."

The zine has many, many acknowledgments. One of them: "All women in fandom everywhere — for breaking the mold! Whoever wrote that old Lt. Mary Sue story that started it all -- please "come out" and join us!"

This past weekend, Hugo-award-winning science fiction writer C.J. Cherryh and protege Jane Fancher were guests at the 18th annual Atlanta Fantasy Fair. Being extraordinarily nice people as well as brilliantly creative, they let us corral them in the bar for two hours Friday to discuss everything from the American educational system to philosophy and writing. Ms. Cherryh taught Latin and Ancient History for 11 years, and Ms. Fancher's background is in anthropology, though they've both delved into physics and related sciences.

What you might be most interested in, though, is a comment Ms. Cherryh made at a panel they did with Stephen R. Donaldson on "Interstellar Contacts." The remark applied to characterization in general. She allows for the fact that some writers are great idea" people, and that they can produce a readable product focusing on a concept. But in her estimation, to write a really good novel, you must present intriguing and believable characters. And to do that, "You have to become your character. That means you live, breathe, and think that character. It means if you have a being with arms like an ape, it's going to cross them behind its knees and not at the butt." Colorful analogy aside, she went on to talk about how you can't accurately set up and describe a situation unless you can understand the motivation of the characters involved, and to do that, again, you engage in role-playing. Shove your own principles and values aside, and become the mass murderer/imp/abused child/what-have-you. And she proceeded to relate how her poor secretary's had to put up with her moods while she generates some of her more detestable personas.

I wish you luck with the zine, and with the idea... personally, I'd like to see you keep the smaller format... maybe run it as a letterzine. I'll bet there are other folks out there like me who would like a place to vent, to trade ideas, to get some validation for our work... I'd like to be able to ask others, "Is this going too far?" "How can I work in a skill with exotic weapons?" and a hundred more...[2] 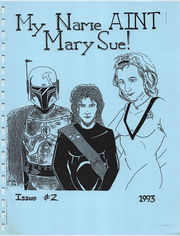 From one of the editorials:

The last time I released an issue of this zine, life still made sense. Of course, that was a long time ago. Much longer than I ever intended, I assure you. To all of you who were expecting to see this issue back in June, I can only say that reality sometimes has a nasty way of intruding upon the joyful business of fanzine production. And every now and then, a usually brilliant and productive editor is forced to withdraw temporarily from "the scene," in order to take stock of situations and develop a new plan of action for survival in the mundane world.

So just to bring you all up to date, my soul-searching has resulted in a (probably somewhat reactionary) move to Washington, DC, a job [snipped], a couple of brief and ultimately fruitless romantic encounters, and very little time left over each day for the important things like writing, zine editing, and shameless promotion.