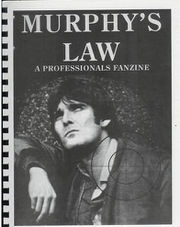 Murphy's Law is 127-page slash and gen anthology. All stories focus on the character of Murphy from the TV show The Professionals. 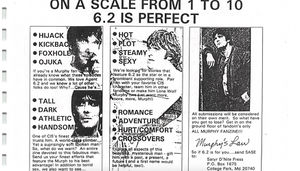 a submission request printed in Cross My Heart #11 (December 1993)

From Media Monitor: "This full length fanzine features Agent 6.2. Includes a sampling of of the Atlantic, deeply exploring every nuance of this beautiful man. Sexy. sad. and even silly on occasion, ML is a must for Steven Adler and PROS fans. Bodie, Doyle, and Cowley abound, but Murphy is always the prime focus. Alternates hard-hitting and mature, soft and sensual, and flap-jack funny!"

The Zine's Introduction: By Murphy Himself!

When they first started talking about this project, I remember saying, "You're mad!" It's hard enough being expected to climb crumbling brick smoke stacks with a nutter like Bodie... it's even worse getting shot and hanged upside down on the afore mentioned structure... The, I thought the ultimate in inauspicious luck was not having a partner to sneak me pressies like grans and whiskey while recovering in the hospital from the afore mentioned bullet wound... I was wrong. Welcome to Murphy's law.

When the girls told me I'd be carrying a 'zine all by myself, I thought -- ME? Starring in a fanzine? You see, I've heard about these fan birds and the the things they like to write about and draw. Initially, I was quite concerned as I imagined various roles I might be called to portray -- but I've found that it hasn't been all that bad. In fact, it's been intensely pleasurable (heh, heh) at several points.

So, like a good lad, I've played along. On these pages, you find I've been battered, coshed and boffed for the sake of fen everywhere. Enjoy this publication with the knowledge that I found all of it -- good and bad -- bloody brilliant. -- Murphy

See reactions and reviews for Migration.

[zine]: --Cute, but not good zine by the editors of Professional B&D. Nice production, and a slightly better zine--at least they are heading in the right direction. [1]

[zine]: Those who know me, know that I adore Bodie/Cowley. But to give you an example of different pairings/ideas. I purchased a zine at MW called MURPHY'S LAW (?) It was an all-Murphy zine. I really enjoyed it; the writing was good and the story ideas were (IMO) original. My two roommates at MW HATED it! All they whined about was that B & D weren't together (these are good friends, BTW, and put up with my B/C fetish). [2]