Professional B and D 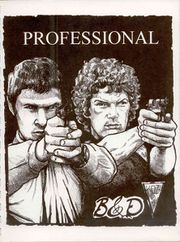 Professional B and D is a Bodie/Doyle slash 175-page Professionals anthology.

From Media Monitor: "This is a one-shot theme zine. Featured in this anthology are mature themes, adventure, violence, heavy relationships and erotica that touch, (if very briefly), on some aspect of The Professionals... Art by O.C., Nuernberg, Cat, TACS."

See reactions and reviews for Migration.

[A Long and Winding Road]: Doyle blames himself for the suicide of a girl whom he had pretended to care for during an undercover op. He goes to remote Scotland to heal, where he stays with "Letty" Walsh at a manor she owns. He takes up portrait painting, becoming quite good, and slowly heals from the psychological trauma. Eight months later CI5 is about to be disbanded and Cowley retired on medical grounds. Bodie joins Doyle in Scotland and they become lovers, having both come to realize that they need each other to live. Their relationship grows. Doyle sells a number of his paintings, enabling them to set themselves up in business. They return to London and start a successful security consulting firm with Letty as office manager. The story ends with them picking Cowley up from the rehab home; he is going to live in their building and work for them. [1]

[zine]: PROFESSIONAL B & D: I found this zine a really terrific read; the writing was tight and action-oriented. With a neat black and white cover, and typed clearly for easy reading, and edited very well; it looked great too. All C15 stories, it was nice for a change, from all the alternative material that seems to dominate the fandom lately. (Not that I mind it terribly, but I do tend to miss C15 stories when they are few and far between.) The longest story was saved for last. A Jane story with aliens which was very interesting. Slash of course. The shortest stories came first, with a mixture of pre-slash/Murphy & Doyle story (which I read once and did not enjoy... as I've noted before, I am NOT a Murphy w/my guys fan!)/and slash stories. All were good, but two stories impressed me the most.

SHINING THROUGH THE QUIDDITY, by Valerie De Vries, is a story where B & D are relatively new to CI5 and each other. It displays feelings, emotions that are real — that I can relate to, as well as to the real B & D in the series. It's written in an excellent style; it wrings my heart — without tearjerking.

The other is LONG AND WINDING ROAD, clearly one of the best B & D stories I've read since... well, since a long time ago! It has their humour intact, as well as excellent characterization. And the story has every element that I could wish for in a B & D story... angst, romance, humour, anger, happiness, future career expectations, interaction with others in CI5... and reactions to everyday circumstances. It also does quite a job in self re-evaluation, as well as understanding each other's moti vations. When I read a story over and over again, as I have with this one, it means it's one of the best oil my list of il-time favourite reads. [2]

This one was spotty for me. I can't remember who, but someone in these pages mentioned liking 'Shining thru the Quiddity' - I found the pacing a bit slow, which gave you time to notice the unlikely plot. I can deal with a fantasy element in stories without it impinging on ray disbelief, but if the story is trying to be real world (as I think this one was), it should STAY real world! There's a well written but hard to take 'post Bodie's death' story by Jane Mailander in it that I liked. She's my fave rave new author these days (although this one is not one of my favorites by her). [3]