Out of This World (Professionals zine)

Out of This World is a 125-page slash Professionals novel by Jane of Australia. The cover is digital art by Jade. 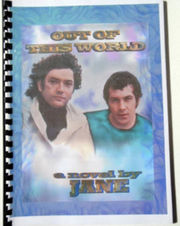 Originally a 1981/82 circuit story, it was published in Professional B and D as a much shorter story. It 2004, it was printed in a standalone zine, one with a color cover.

OUT OF THIS WORLD: The "Director's Cut". It's been around 12 years since the short novel, OUT OF THIS WORLD, was printed in a zine produced in the States ... and what few people know is, the story was eviscerated to make it fit the editor's requirements at the time! A full third of the story had to be cut off at the end (leaving the conclusion to piece fairly obviously "hanging"), and then the rest of the story had to be edited with a razor to make it fit the length restrictions placed on it.

Starting up again with "519 IS DOWN" in CMH #14, Jane is back working in pure-b/d (!) for the first time in the better part of a decade, and the "director's cut" of OUT OF THIS WORLD is the first work on her agenda (ETERNAL WIND doesn't count as pure-b/d, since it's a/u and involves a massive cast and a whole new universe).

For those who recall OUT OF THIS WORLD ... you'll be delighted to know that the rets [sic] of the story is now being told!! For those who don't ... it was a convoluted, surprising and often brilliant plot about a serial killer, break-ins at high-technlogy [sic] plants, and UFO sightings in the country outside London. CI5 started by chasing down some link between the serial killer and the breakins, and ended by chasing UFOs, with the most amazing results.