Lingering on the Fringes

Lingering on the Fringes is a slash anthology of stories by Dovya Blacque. The fiction was inspired by Sarah McLachlan songs.

In one issue of Media Monitor, it was advertised under the title "On the Fringes."

Lingering on the Fringes 1 contains 178 pages. It was published in 1993. The introduction comments that the editor had considered printing it on dark green paper to deter photocopying but found the price of colored paper to prohibitive. 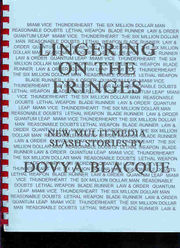 Lingering on the Fringes 2 was published in May 2000 and contains 178 pages. 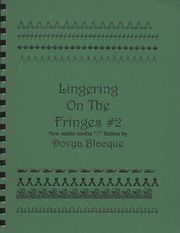 See reactions and reviews for The Touch of Your Hand.

[zine]: The angsty lyrics of Sarah McLachlan fit the B7 universe very well indeed, although I personally always tend to think of them in connection with Pat's Fargone universe, since that's where I was first introduced to them. In Lingering on the Fringes, the songs are applied to various fandoms, leading to some stories that are a bit darker than the author's usual output. "The Moving of the River" is an A/B story that deals with the problem of Blake's past, and the nightmarish memories that the Federation implanted in him to help make the false charges stick. Avon's rational approach to the matter helps Blake to cope. In general I liked the story, but I did feel that Avon's dialogue sometimes sounded a little too stilted and Spock-like, a minor problem that I've noticed in several K/S-turned-A/B writers (and a few artists, too). Now, if only they would switch over exclusively to B7, I'm sure the problem would solve itself quickly. ;) [1]