The Lighter Side Strikes Back

From Fanlore
(Redirected from Lighter Side Strikes Back)
Jump to: navigation, search 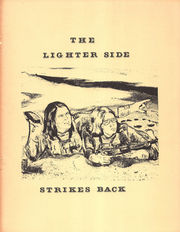 front cover by Bonnie Rieitz, portrays the editors: "Bonnie Reitz is also responsible for our front cover, titled "The Clone Warriors". Why? Because it is an excellent likeness of Ye Eds, (Caro likes the slimming effect of the uniform — thanks, Bonnie!) and as you can no doubt see, we are practically indistinguishable from each other." 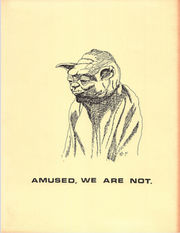 back cover by Maureen B

The Lighter Side Strikes Back is a 44-page gen Star Wars anthology of humor, fiction and cartoons.

It was preceded by Lighter Side of the Force, also edited by Carolyn Hedge.

From the zine: "It should be noted that all the stories here (except a few lines of the Caro Sue) were all written pre-Jedi. I think you'll find yourself admiring, as I do, how closely the authors anticipated the action/events in Jedi."

From the zine, a personal touch: "Here's to Margo Coburn, the first person to order a copy of this zine. To Margo and all others who buy a copy — thanks! It was very brave of you!"

This seems like as good a place as any to be modestly and humbly grateful for what zines have done for me (never mind to me) so far.

After I had been working at my new job about a month, and so felt like I knew it all, I asked someone why a company this big (500 employees at that time) didn't have it's own newsletter. The person responded by asking me if I knew anything about doing a newsletter. Naturally I admitted to knowing a little bit about the subject...to make a long editorial anecdote short, I submitted a spec copy and soon had a second job which paid me generously for skills I'd picked up doing zines just for the fun of it all.

What it all boils down to is that we participate in fandom because it fulfills mental and emotional needs we can't fill any other way. We also do it simply because it's fun. But there is a side-benefit if you get involved in the creative parts. Writers and artists have turned pro, big con organizers find their skills valued by potential employers, imaginative costumers/bakers/musicians branch out and form part-time businesses, I have to pour over unintelligible pamphlets written by the IRS for free-lancers... the list is as unlimited as fandom's imagination! So keep reading, keep watching and listening, and ignore those who suggest your time could be better spent sending in contest blanks to see if you have already won. An opportunity to create an opportunity YOU alone can take advantage of may be waiting right around the corner!

Ok, it's late. Very late. We're hoping not too late. Y'see, the Force was not with us. Sickness (one of us belongs to the disease-of-the-month-club) and the resulting lack of a printing fund was followed by lack of material as a major contributor withdrew material (and after two years, who could blame her?) followed by three months while we replaced it...you probably know how that goes.

We hope the small price og this small zine will partly offset the aggravation. We also learned a lesson. We've been spreading our selves too thin. With Trek, SF and Japanimation fandom as well.as SW, something was usually neglected, and it turned out to usually be SW. So we have decided to make this the last Lighter Side.

In my own case, after I saw the scene in one of the Yamato movies where the boarding party burst into the corridor, troopers diving and firing, as a tall caped figure strides forward through the swirling gasses (does-this sound familiar?) I started looking for other resemblances to SW. I got so interested in Toei animations that it supplanted SW!

Since then, it's been a highly entertaining hobby. Not only because Japan is producing the finest animation in the world, but they responded with good grace to being "borrowed" from.

(Anyone interested can write for my theory about how the entire movie of Adieu Galaxy Express is a dig at SW up to and including the John Williams music!)

And then there's the scene in Space Cobra where Cobra, a sort of blond, bold sort, walks into what is pretty obviously The Cantina — even Greedo is there. Cobra is menaced by a BEM with lightsaber. It is ail following the SW scene closely, with the BEM taking the role of both baddie and Ben, but as the light saber comes up to cut off -- AND YOU REALIZE YOU'VE BEEN SET UP BECAUSE COBRA IS ALREADY MISSING AN ARM! It's screamingly funny!

At least I've managed to see Return of the Jedi. We had to go 125 miles each way to do it, and we came dragging in at 4 AM, still discussing the movie. This time, it was George Lucas's turn in the video war. One of the longest running, most popular Japanese animation characters is Harlock. Harlock is a pirate, defending the Earth from invasion with only his ship, the Arcadia and his 42 crew members...well, no time to go into all the details! But imagine how we almost died laughing when, in RotJ, when Lando called Han a pirate and Han responded by giving Harlock's two finger salute.

And see, Susan? I didn't tell them the Beverly Hillbillies joke about returning Jed's eye....

Excerpts from "The Groom's Side

A Corellian pirate was not exactly what Leia's remaining aunts, uncles, cousins and courtiers would have had in mind as the consort of the heiress of Alderaan. But since Alderaan was now an asteroid belt, a Corellian pirate was a still objectionable, but acceptable, choice. After all, the foolish girl had ruined any chance ol a decent match with someone of her own class when she'd gone and destroyed the Empire. So the Organa family dutifully unpacked its finery and packed itself off to Tatooine to witness the dear girl's wedding.

[Solo's family and associates] were a rowdy lot, mostly Corellian, none of them looking too prosperous and many of them eyeing the jewelry on their fellow guests with a proprietory air. If the giant Wookie hadn't appropriated everyone's blasters as they entered and still kept a wary eye on the crowd, the more sedate members of the audience would probably have been mugged by now.

Among the attendees that waited for the ceremony to begin was Han Solo's father, a rather disheveled individual named Nar who, it turned out, was a nerf herder. In fact, he had brought one of his favorite nerfs along with him from Corell. He called her Tris and it was not known whether she was intended for use as a present, dinner, or was Nar Solo's travelling companion. Han didn't seem to want to talk about it and had been heard to mutter "Thanks for the surprise, kid," in a less than grateful manner to Luke Skywalker who had hunted up Han's father for him. He had been unable to find any trace of Myri Solo, Han's mother, who had bolted from the farm years before Han did, but perhaps that was just as well.

The wedding was being officiated by the reconstituted Obi-Wan Kenobi and even Yoda had sent a representative from Dagobah in the form of a snake like creature called Eloc who was training in the ways of the Force. It was, to say the least, an interesting gathering.

It had been hoped that Boba Fett had been killed in the explosion that had decided the fight for the Rebels, but now the bounty hunter stood menacingly in the doorway, blaster leveled. It was Obi-Wan who broke the tense silence. "You have no place here."

He was answered by laughter that was amplified by Fett's helmet. "Oh, I think I do. At least, I better have."

Han Solo reached for a blaster that was not at his hip and spat "Damn." He started to say something to Chewbacca but forgot what he was going to say when Fett reached up and pulled off the helmet.

The person inside the armor was an attractive woman of early middle age with long brown hair that she shook out as she explained apologetically, "I didn't have time to change before the ceremony. What with all your incompetent soldiers chasing me all over this sandball. I'm afraid I had to get rid of a couple of your patrols that were inclined to shoot before asking questions. Hello, dear," she added, and seemed to be addressing Leia.

Han, meanwhile, pulled Leia aside. "Are you sure you want to go through with this? I mean, my father—my mother—I...."

Leia gently put her fingers across his lips. "Shh, it's all right. I understand." She gave him a reassuring smile and added, "After all, I'm from a royal family. Someday I'll tell you about my great great grandfather, Marl the Unforgivable. I think he and your mother would have gotten along."