lexa buys (a) fish. is a Clexa text au that went viral on social media after people outside of the fandom mistook it for a real text conversation. It gave rise to the shared fanon character of Fish the Dog in the Clexa fandom.

The fictional texts[1] were originally posted on November 24, 2015, by ClarkeGriffinTexts on Tumblr, reimagining the post-apocalyptic femslash ship of Clexa from The 100 as a married couple in a modern setting. In the text exchange, Lexa tells Clarke about the new puppy that she and their two children are bringing home from the pet store. Clarke isn't happy because Lexa was supposed to bring home a pet fish, though Lexa assures her that the puppy is named Fish.

The post was a hit within the Clexa fandom,[2] but soon people outside of the fandom were also sharing the screenshots, mistaking Clarke and Lexa for real people, and Clarke for a man.

The post went viral on Friday, November 27th, and has since been retweeted and shared thousands of times on Twitter, Facebook, and Instagram, all with some variation of the hashtag "#relationshipgoals" and the caption "Me as a wife" or "Me to my husband".

However, this isn't a straight couple- or even a real couple.

According to Hypable, one Facebook post had "more than 650,000 shares, with people going crazy debating the issue and declaring their loyalty to either #ClarketheHusband or #LexatheWife."[2] The texts also made their way to Reddit where they were noticed and shared by the British tabloids Daily Star[4], Daily Mirror[5], and The Sun[6], with the publications also mistaking the texts for a real conversation between a husband and wife. The Daily Mail also picked up on the story, though they were able to figure out that the texts came from a Clexa AU.[7] 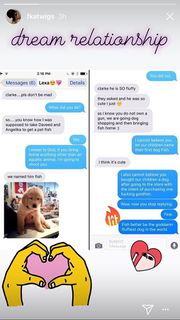 Even celebrities like FKA twigs have shared the text au, mistaking it for a real conversation between a husband and wife.

Replying to a confused anon, a Clexa fan on Tumblr explained the situation:[8]

Hey there! It kind of blew out of proportion x)

There was a texting au post about Clexa, where Lexa goes with their kids to buy a goldfish and ends up buying a dog named Fish. She tells Clarke and the blonde has an interesting reaction.

But yeah, then the heteros got ahold of it and thought it was real and that it was a wife called Lexa talking to a husband called Clarke (heteronormativity!) and turned it into some #marriagegoalz ethical discussion kind of thing.

And then, the Daily Star, as the great paper that it is (looking at all the libel and contempt of court cases they lost rn), shared the story as an actual serious article. Which honestly, just hire me instead? At least I’d fact-check the story...

And at some point, Jason shared and commented it too and it's been a crazy couple of days x) people created mock Clarke the Husband and Lexa the Wife accounts and there have been hashtags flying around mocking the straight heteronormative people that stole the post and made it into some idiotic real straight couple convo instead of the fanmade texting au between a lesbian and a bisexual girl that it was.

Hope that answers your question! :)

Many Clexa fans were amused by the misunderstanding:

#UniteWithClarkeTheHusband
Meninists freaking out over a story about fictional lesbians by hormonal teen lesbians.

does anyone else remember when the Straights on facebook thought screenshots of fanmade clexa text conversation about a dog named fish was a real life conversation between a straight, married couple and it went viral and there were like new articles and polls written about it and no one realised that it was actually a fictional gay ship because i do

The way that Clarke/Lexa, Fish the puppy, text message manip went viral and spread to the Heterosexuals™ is truly iconic

The fandom poked fun at the public's assumption that Clarke is a man:

Honestly don't know who Lexa and Clarke are, but I am Lexa and he is my Clarke.

Some played along by pretending to take either Clarke the Husband or Lexa's side in the argument over Fish, using hashtags such as #UniteWithClarkeTheHusband and #justiceforlexa:

All I wanted was a fucking goldfish

Remember when Lexa and #ClarkeTheHusband got married and weren't fighting over Fish The Dog?

Well, he is technically a gold Fish - his name is Fish and he is a golden retriever.

y'all can't blame lexa for getting a dog instead of a fish! fishes are ugly boring creatures #justiceforlexa !!

After the texts went viral, Fish the dog became a fanon character in his own right (similar to Elyza Lex) and occasionally appears in Clexa fanworks.

Fish has even appeared in fics from other TV fandoms.