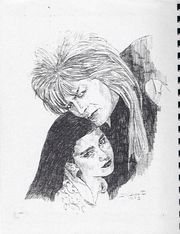 Art of Sarah and The Goblin King by unknown artist, featured in the zine Lions and Tigers and Zines, Oh My! #2

15-year-old Sarah Williams (Connelly), who prefers spending her free time enacting scenes from her favorite book, Labyrinth, is asked to baby-sit her infant step-brother for an evening. The baby is fractious and Sarah resentful and frustrated. When the baby, Toby, refuses to stop crying, she turns to her favorite book and tells Toby the story of a girl whom the Goblin King loved. This girl had wished her baby brother away to the goblins. As Sarah concludes the story, she repeats the wish as her own, and goblins indeed take Toby away.

The Goblin King (David Bowie) appears and Sarah demands the return of her brother, beginning her quest through the titular Labyrinth that becomes the focus of the movie.

Labyrinth in other media

The continued popularity of the film on video and DVD came to the notice of the distribution company, and Neil Gaiman was asked to create a new movie that could appeal to the same audience.[1] The eventual product of that suggestion is MirrorMask.

In 2006, U.S. manga publisher Tokyopop began releasing a new series Return to Labyrinth, which has the imprimatur of the Jim Henson Company and is thus positioned as the canonical sequel to the movie. Two volumes have been released, with another two planned.

In the 1990s, the internet fandom began to grow, though perception was that the film was still a relatively unknown cult classic. By the 2000s, the film's popularity became widespread, and many fansites, fan communities, and fanfiction archives continue to be active. Other activities include the annual "Labyrinth of Jareth" masquerade, which is held for fans to dress up and attend, celebrating the film.

Fanfiction communities flourish on LiveJournal and FanFiction.net; the favored pairing is Jareth/Sarah, although a small rise in those writing Jareth/Toby has developed in the wake of the manga. A popular trope is futurefic in which Sarah returns to the Labyrinth as an adult. A good example is A Forfeit of Dreams by K.L. Morgan, one of the best-known writers in the fandom. Espresso Addict calls it the best take on the 'adult Sarah returns to the Labyrinth' genre I've read.[2] Kathryn Andersen writes: This really got the spirit of the movie, beautiful, bright and dark, imaginative.[3] Other widely recommended Labyrinth writers include Danse Macabre and Scattered Logic. Crossovers with Harry Potter and other fandoms involving magic are moderately common; an example is Of Dreamers and Journeys by Mystical_Magician, in which Sarah becomes the Hogwarts librarian. Harry Potter crossovers often show Jareth as the power behind Gringrotts, the Goblin bank, as in My Kingdom Is As Great, a series by TardisIsTheOnlyWayToTravel (Now deleted, link via webarchive.org)

I didn't start writing at all seriously until I was in my early teens...what got me started was my brother bringing home the film *Labyrinth* with David Bowie as Jareth, King of the Goblins. I swear, you show that film to any girl between the ages of 12 and about 16 (I was 13 at the time) and I can almost guarantee you that she will fall madly in love (or at least lust <grin>) with Jareth.

Anyhow, I started my writing with a bit of fan-fiction based on the movie, and what started off as a little 2-page affair gradually grew into a 120-page monster, which has subsequently evolved into a planned series of at least 15-20 different novels. I've only got about 3/4 of Chapter 1 of the first one actually written, but up until now I've been working mainly on background. I've created 5 fantasy races (Lirians, Aekrali, Rol'vin, V'krion, and Tigalli) and 3 new planets (Xeleron, Kyllir, and Tigal), as well as numerous characters (my character list reads a bit like the indexes in Melanie Rawn or Anne McCaffrey <grin>).

The only things from the *Labyrinth* film that remain are the Labyrinth itself (much changed from the original) and the character of Jareth (also much different) so I'm hoping one day to get some of it published; it's quite a large and detailed world. I have histories going for most of the races and I'm also working on a dictionary of the Lirian language.