Isabelle is one of the most popular characters in the Animal Crossing franchise. Due to her popularity, she has become the franchise's mascot.

The Isabelle amiibo sold out immediately upon its 2019 release, surprising writer Chris Carter due to otherwise low sales of Animal Crossing amiibo.[2]

However, Isabelle's immense popularity has also led to hype backlash in some cases. Some fans complain that Isabelle is "moe bait" who hogs the spotlight from other characters deserving of appreciation.

Due to her work ethic and ‘pure’ personality, Isabelle is generally loved by fans, who appreciate her awkwardness and tireless enthusiasm. Fanworks featuring Isabelle often highlight what she is speculated to enjoy in her spare time. Occasionally she is ‘promoted’ to the role of mayor, should the fanwork lack a human mayor.

After she appeared in Super Smash Bros, crossover art of Isabelle became popular, featuring her interacting with the various characters and franchises featured in the game. 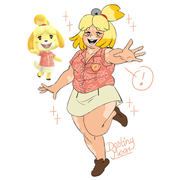 Fanart by Moon of a humanized Isabelle with her ACNH outfit, and vitiligo to resemble her original fur markings (2020)