The practice of making zines originally came into media fandom in the 1960s from science fiction fandom, where fanzines had been a popular fan activity since the 1930s. However, the content of SF zines is very different; they are usually non-fiction, consisting of a variety of articles about fannish topics,[1] whereas media fanzines include, or consist solely of, fanfiction, art, poetry, as well as discussion.

In the absence of any other solid medium, print fanzines are a record of what everyday people around the world were thinking and discussing before the Internet, and one way to understand trends in fandom over the period from about 1970 to the mid-1990s when access to the computer and the internet became a given.

In 1999, several zine publishers participated in an online chat discussing their history with fanzines, how fanzines were made and the impact of the Internet on fanzine production. All three parts are archived here.

Fanzines as a Genre 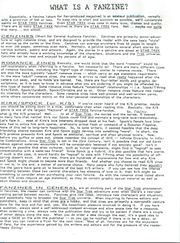 undated info sheet by an unknown fan (possibly April Valentine); this may have been a handout at a con

"Star Trek fanzines arose out of Science Fiction fandom where 'fanzines' never carried FICTION -- they were articles, and personal ramblings and letters of comment on novels, and reviews, and Q&A's with authors, and science and criticism and (best of all!) CON REPORTS!

Star Trek fanzines were started by people steeped in that tradition, but whose writers and readers wrote FICTION -- Star Trek fiction with ST characters from the aired shows, plus original characters. And that's what they published. At first many fanzines carried scripts in script format - stories that could have been filmed for TV. They had poetry, artwork, and most of all LETTERS OF COMMENT (LoCs).

At first all kinds of stories glumped together in any 'zine -- the distinguishing characteristic was the quality of the editing and demanding standards of the editors. They might be amateurs in publishing, but many were librarians or English Teachers -- people who knew story-structure and quality and were as qualified to edit fiction as any professional hired in Manhattan publishing. So the stories started good and got better and better -- surpassing in many cases stuff you could buy in Mass Market paperback.

Then a strange thing happened. With print runs topping 1,000 copies, fanzines began to differentiate on the basis of content. Paying $20 for as many words as $5 would buy in Mass Market made readers discriminating -- they wanted to be sure they would enjoy the stories before buying the 'zine. So they looked for subjects they loved -- characters featured, settings.

And fanzine publishers who footed the upfront costs and had to make them back began to invent GENRE -- one step at a time, right before my eyes, I saw market forces creating genre-rules, and I came to understand why genre exists, what it is and where it comes from.

It isn't a marketing tool some businessman invented to impose his taste on the market. It isn't a censorship tool. It arises from the READERS search for what they are willing to pay for.

If the readers searching for something to read can't recognize in the package the signs and signals that they will enjoy the contents, the publisher will lose money and not do any more things like that. If the reader thinks they'll like it, and then finds it's a dud, the reader won't buy anything that looks like that again, and a couple more tries later the publisher stops doing that." [2]

Zines, Technology, and Fans' Perception of Time and Patience

One of the more persistent complaints about buying and selling fanzines was the difficulty in getting a response from a fanzine seller (or vice versa, a response from the buyer). Letterzines and newsletters are brimming with complaints about lost letters, lost zine orders and payments, and lost fanzines. The postal service was universally reviled by fans across the world.

With the advent of email, fans grew even less patient with delays in buying and selling fanzines. Long before email accounts were universal (in the early Internet years, most fans only had email through their workplace, making its use for personal email an iffy proposition), fans complained when their emails were not answered

In 1998, one experienced fanzine buyer tried to provide context to her impatient fellow fans:

"You bet we are all spoiled with e-mail. It's very handy to check on orders and report their arrival. When I first got into fandom acquiring zines by mail was fraught with anxiety.

You found a zine advertised in a year-old newsletter, or in the back of another zine, with no idea how old the zine was. You sent off a letter of inquiry with your SASE and waited. If you were lucky the zine ed had a stack of flyers ready to hand and popped one into your envelope and put it in return mail. If not, you waited some more. When you finally got your flyer telling you the zine was available and how much it cost you wrote out a check, put it in another envelope and mailed it off. More waiting.

I would get so impatient that I went to a lot of trouble to go home for lunch to check my mail. I had all of 10 minutes to eat in but I could collect any fannish mail and have any zines waiting when I came home. Sometimes you waited a loooong time, with no word what was going on. Was it lost in the mail? Did your check get there? How would you know if there was a postal problem? Should you bother the editor with another letter? I Want It Now! Then one day there was a big box on the porch containing most of the extant Ashton Press zines. Oh joy, oh rapture. They have more advertisements in them, so out go the SASEs and the dreamy round continues.

As I became more familiar with media fandom and zine publishing I figured that many of the long waits were for zines to be reprinted. I was catching up on all the back issues of some long-running B7 gen zines and the editors had to wait to batch orders to make it possible to reprint a particular title. Bill Hupe was a godsend to new fans since he kept zines in print and filled orders very quickly. We will not see his like again, because it was a full-time job for him. Few fans can affford to do that."[3]

It seems to be a constant that fans look back at the good old days, and find fault with the new. The zine world is no different.

"I also recall, in the 80's, that the big complaint from some of the early zine publishers was that the newer zines were poorly edited. Having read the earliest stuff, I could see what they meant, because that early stuff was so tightly and perfectly written. Not a word out of place. But the subject matter of the early stuff seemed so... esoteric. There wasn't much that seemed to be stated very directly. So, I didn't give much credence to all those complaints; I loved the new stuff I was reading. Now, a dozen years later, I find myself thinking (and sometimes saying), 'Gee, online stories have minimal editing, if any at all. This new generation of fans doesn't appreciate anything about the craft of writing. They don't even understand what quality is. What's fandom coming to?' <vbg>"[4]

Fanzines have often been described as communal in nature, with an emphasis on inclusion. In sharp contrast, commercial publications focus on sales by banking that popular themes and (presumably) quality products will motivate buyers to part with their cash. In reality, fanzines straddled both worlds, performing a difficult balancing act. The higher the submission standards for stories, the fewer writers (and the fewer of their friends, and in turn readers and buyers). Lower standards could, on the other hand, drive away buyers. Word of mouth meant everything to fanzine publishers and a single bad zine review could tank zine sales. This all took place against a fandom backdrop of embracing the principles of IDIC and one can easily see why publishing fanzines could take on an almost schizophrenic quality. In most cases, the communal, inclusive side won out. This can be seen in the way fanzine publisher would 'nurture' other zines by offering other fanzine editors free ads or including their flyers . In a world were the written word was the main means of communicating fan to fan and the story-teller the 'star', more zines meant a greater fan community.

"As Constance Penley (1991) notes, fanzine editors are torn between competing impulses toward "professionalism" (the development of high technical standards and the showcasing of remarkable accomplishments) and "acceptance" (openness and accessibility for new and inexperienced writers). Push comes to shove, professionalization gives way to acceptance; even the most polished zines occasionally include work that falls outside their overall standards but represents the fledgling efforts of new fans. Any fan who writes stories has a good chance at publication, since most zine editors struggle to find enough acceptable material to fill their zines and take pride in their receptiveness to new contributors. In fact, many fans turn to writing to support their zine-buying habits: contributors get a free copy of the published zines. Women who have low prestige jobs or who are homemakers can gain national and even international recognition as fan writers and artists; fan publishing constitutes an alternative source of status, unacknowledged by the dominant social and economic systems but personally rewarding nevertheless."

This is not to say that fanzine editors would publish any story that a fan writer submitted. Or that they would not edit the stories they did accept. It meant, however, that within fandom there was a trend towards inclusion which is reflected in the perennial and ongoing debate over the nature of reviews and the role that concrit and feedback should play in fannish culture.

""Letters of Comment" are expected to be "constructive criticism," phrased in supportive, "non-hurtful" language and to reflect the shared interests of readers and writers. Although they can serve as weapons in ongoing "fan feuds," these letters are more often acts of friendship, endorsing new writers or providing suggestions for how contributors might further develop their talents."[5]

One fan did some research and created this table for the article The Legacy of K/S in Zines: 1991-1995: Publisher by Publisher

And even before the world wide web, fans noticed a drop-off in number of new zines.

For more, see Why Fewer Zines?.

Zines and the Internet

Main article: Zines and the Internet

The arrival of the Internet had a profound effect on existing print zine fandom.

As fanzines faded from fannish life, a few newer fans who had only seen fan fiction online developed a negative, almost hostile attitude towards the buying and selling of fanzines suggesting they were, among other things, elitist and illegal.

In the late 2010s, zines started making something of a comeback in certain fandoms, available in both print and online formats. Social media has made organizing and contributing to zines easier; many have associated Discord servers to help the staff stay in constant communication. Editing is also much easier due to programs such as Google Docs.