Gendry Still Rowing was a meme in Game of Thrones fandom, humorously referencing the fact that the character of Gendry Waters disappeared for several seasons of the show and was last seen in a rowboat rowing away at the end of season 3. The meme received media coverage, tweets from the actor who plays Gendry, comments from TPTB, and eventually a shout-out on the show when Gendry returned in season 7.

In season 3, episode 10, "Mhysa", of Game of Thrones, Gendry Waters escapes being burned at the stake by leaving Dragonstone in a rowboat. He plans to flee to mainland Westeros. This episode aired on June 9, 2013, and would be the last time Gendry was seen on the show until August 13, 2017, when Gendry returned in season 7, episode 5, "Eastwatch."

After Gendry rowed away at the end of season 3, he remained absent from the show for all of season 4, his actions and whereabouts completely unaddressed. It seems to have taken about a full year for Gendry's absence to really be noted, probably because fans were hoping he'd come back in season 4, but how exactly the "Still Rowing" meme began is somewhat unclear.

An early example—showing that fans where already making fun of the fact the Gendry was still probably out in the boat in season 4—is a May 2014 reddit thread on the r/gameofthrones subreddit showing a cartoon of a man in a rowboat and the title "Meanwhile somewhere in the Narrow Sea".[1] The post received 310 comments and as of early 2019 has just over 3,000 upvotes. These numbers no longer qualify the post for r/gameofthrones' top posts of all time, but is substantial response considering the date the post was made.[2] 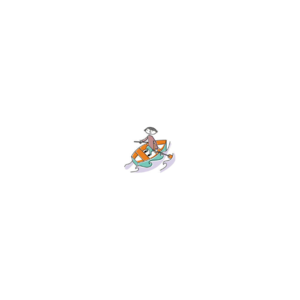 Drawing from the May 2014 Reddit thread, posted with the caption, "Meanwhile, somewhere in the Narrow Sea"

Many fans in the thread commented on the fact that Gendry's disappearance was actually a result of the books' adaptation into a television show.


In the book it was someone else [in the boat] right? But there's still no word? The other character ( of which the show fused the two into) is accounted for.[3]


Correct, it was Edric Storm (a different bastard of Robert Baratheon). Gendry remained with Beric Dondarrion, Thoros of Myr and the brotherhood without banners to be their smith.[4]


After each episode's credits there should be a clip of Gendry still rowing to Westeros.[5]


Don't worry Gendry you'll hit land when the writers figure out what they want to do with you![6]


My wife is furious that she has yet to see anything this season from one of her favorites. She swears Gendry has some huge role he has yet to play in all of this and his absence is driving her crazy.

I told her he is probably going to end up like Benjin. Died off screen and we'll see his empty boat on a shore somewhere during someone else's scene lol[7]

However, the term "Still rowin'" came from the actor Joe Dempsie, who played Gendry, who tweeted, "Still rowin'...#GoT" in June 2014[8] just days after season 4 concluded without any updates on Gendry's status. Fans took the concept and created various image macros and other memes, many of them tweeted at Dempsie in reply to his post. Popular variations included Gendry in the rowboat with text, Gendry inserted into other water scenes on the show, or missing characters photoshopped in the boat with Gendry.

In addition to Joe Dempsie's tweets, the show runners Dan Weiss and David Benioff also showed they were aware of the meme. In a July 2016 interview, they said:

David Benioff: "He's getting in great shape. Think of the shape he's in after rowing for four seasons."

When Gendry returned in 2017 for season 7 episode 5,[12] the meme was referenced in dialogue: Davos Seaworth, who originally put Gendry in the rowboat back in season 3, goes to find Gendry and says, "Thought you might still be rowing."[13]


When the directors put a fandom joke about Gendry rowing forever. Fantastic thank you #GameOfThronesS7[14]

Dempsie also tweeted about it again: