Future Wings is a gen Star Trek: TOS and Star Wars 122-page fanzine. The zine may have been the first (and only) Star Trek zine to be compiled by women in The Royal Canadian Air Force.

The second issue is called Future Wings Flypast. There was to be a third issue called "Future Wings Front Row Center" but that one never made it off the ground.

The editor notes: "This fanzine contains some sexually explicate (sic) material, concepts and language which may be offensive to some. PLEASE READ AT YOUR OWN RISK... Hans Dietrich, Shivana Lin, Pickles and The Scope Wizard are pen names. The author regrests she cannot disclose individual addresses, but will happily forward mail if requested." 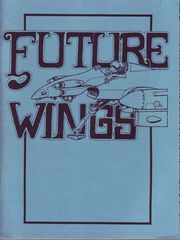 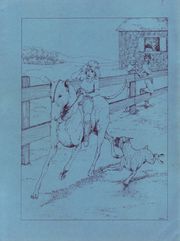 back cover of Future Wings 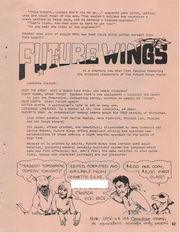 Future Wings was published in 1978 and contains 122 pages. It has art by Hans Dietrich and Carrie Rowles.

FUTURE WINGS is a charming new ST fanzine featuring the original characters of the Future Wings realm! 122 pages printed offset, and beautifully illustrated by Hans Dietrich and Carrie Rowles, Future Wings offers excellent writing and spirited new personalities to those seeking a light hearted approach to the world of Star Trek. Because it is written by adults, Future Wings does contain some adult material some may find offensive. But don't fear; the same material is also quite funny. Humour and character portrayal are our pleasures! [1]

This fanzine that you're about to read, Future Wings, is a first of sorts; this editor's first 'zine attempt, the first ST fanzine to come out of Chatham, New Brunswick, surely the first ST fanzine ever compiled solely by nembers of the RCAF. Because of this latter, readers may, just MAY detect a hint of the ol' wild blue yonder tinging our tales. Please, purists, forgive us. We know it's Star Fleet, not Star Squadron, but-we are (dare I say it) partial. Inexcusably, proudly partial. Also, we are insanely jealous of those liberating twins known as literary and artistic liscense; boy; do we bag our limit on these! Captain Kirk is one example. Within the realm of the Future Wings world, dear James neither looks nor acts like his usual self-ho ho! One reason for a lot of hate mail I'm sure, but that is our privilege. In other words, tough bananas. Enough said. Some notes on our stories. All of the new characters you will meet within these pages are based on real people, even when clothed in fur, feathers, or a strange uniform. Thanks for the appearance of our two canoids, Michel and Rinus, go to two terrier breeds-the doggy folks will know which they are-and many, many thanks are extended towards visionary artist, Nick Hyde, for the painting from which the visual rendition and name of one of the principal characters of 'Biitter Avatar' was taken. Mr. Hyde's works are beautiful, imaginative, and, best of all, inspirational. Another character, Rupert, owes his handsome good looks to Mr. Hyde too, in part, anyway. But don't ask him. Rupert would never admit it.

Our story 'Fuzzy Adams' was written as a sequel to 'Jihad', one of the animated ST episodes. For those of you wondering at the discrepancy between this story's Prince Tchar and the version that appeared on the screen, here the reason: the screen version looked god-awlful (no pun intended), as the Scope Wizard out it, "sort of like Wille E. Coyete, but scrawnier!" Our illustrations do the fellow far more justice (than he deserves), and much the same goes for Lieutenant Arex. Artistic liscense, folks. Yes, yes, we have Star Wars goodies in this issue. That answer your next question?

In conclusion, a mild request. Please remember that this is basically a humourous fanzine whose 'keen insights' are to be taken with a grain of salt. We mean to entertain, not offend, but since what is offensive is purely up to an individual's interpretation, we will take no blame nor make apologies. Besides, friends, and believe me, no one would take the time and effort we did to satirize something we really didn't like.

The most talked-about fanzine at T'Con (the successor to SeKWesterCon, and run by Paula Smith with Lori and Gordon Carleton), was a fanzine called Future Wings, published by Jeanette M. Eilke of the Curtis Park Canadian Air Force Base in Chatam, New Brunswick. The fanzine ran 122 pages, offset. The primary illustrator was Hans Dietrich, who published many drawings in many other fanzines in the short period of time the artist was active in fandom. Future Wings was billed as "the first ST fanzine ever compiled solely by members of the RCAF [Royal Canadian Air Force]." "This is a humorous fanzine," explained the editor. Although all the stories were Star Trek, many Darth Vader cartoons cropped up throughout the fanzine. There was a sequel, Future Wings Flypast, which continued the same themes. [2]

'Future Wings' is a first effort, and comparable in my mind to receiving Stardate: Unknown #1 in the mail with no advance warning. If you like humor, if you like gorgeous artwork, if you're willing to read stories whose slant is definitely (and noticeably) skewed from the characterizations we're familiar with from the aired episodes of Star Trek, then this is the zine for you! 'Future Wings' is self-billed as 'the first ST fanzine ever compiled solely by members of the RCAF' and boasts a cast of characters that puts Landing Party 6 to shame. All the prose, poetry, and all the artwork, save that done by Carrie Rowles, is credited under pseudonyms, which is the only unsettling note I found in the 'zine. The 'zine carries the disclaimer that some sexually explicit materials, concepts and language are within the 'zine. Kirk fans should be aware that he is described as 'hero and part time nit,' Uhura is 'away on course,' Chekov is 'at staff school,' and Sulu is married and operating a thriving curio shop in the Epsilon Indi sphere. Arex and M'Ress, and Loom Aleek-Om are present. Fascinating... There's an assortment of lecherous limericks, some short humorous character studies, and a serious story called 'Bitter Avatar' which addresses the issue of politics and species' rights. 'Images' contains a selection of one-page prose or poetry shorts with accompanying full-page illos. Very powerful stuff is enclosed therein. In retrospect, roughly half the 'zine is humorous, the other half is serious. Print is unreduced and the 'zine is saddle-stapled. Definitely recommended! [3] 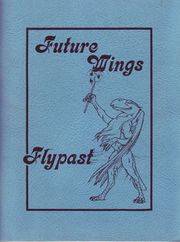 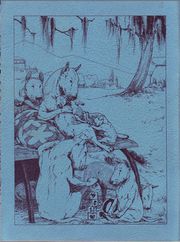 back cover of Flypast 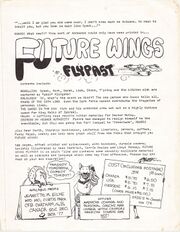 Future Wings Flypast was published in 1979 and contains 140 pages. It has art by Hans Dietrich, Carrie Rowles and Lloyd Penney.

This is a Canadian zine which has a policy of keeping all the regular staff but the editor wraps by use of pseudonyms. The majority of these people seem to be Canadian Air Force members, hence a great deal of flight and aviation references will be noticed by the observant reader. That gives Future Wings and Future Wings Flypast a unique slant in the zine world, something seldom accomplished easily. Or well, for that matter, and they do it well, providing you enjoy humor, sexually explicit material, and don't mind seeing Captain Kirk depicted as a clone of Captain Bingington from McHale's Navy... This issue includes 'The Sword in the Can': action and adventure played for snickers... Fun. 'The Wino and the Astronaut': CLEVER parody of Lewis Carroll's well-known poem, 'The Walrus and the Carpenter.' 'Decreed by Higher Authority': another fine segment in Han's Dietrich's series on the love affair between a human crewperson, Lasse Virin and Loom Aleek-om, an Aurelian (ornithoid people) historian. The charming characters and competently engineered plots make this one of the best 'new continuing character/s' series in fandom. 'Hue and Cry': you must read this one to believe it. 'Rebellion': most editors would not have the courage to print a 13-year old's story, unless as an invitation for the adult readers to snigger. Ms. McKinstry's technique will develop as a matter of course, and there is a certain pleasure in watching a future talent sprout and grow. 'Soliloquy': a story of Prince Tchar and Lasse, retold as a prose poem. No more needs to be said here, except thise people ACTUALLY understand how to write one! 'Red Magic': fair tale once again featuring the Future Wings crew. It would have been better in another issue, as the solution to a problem is precisely the same as another story in the zine. 'Pawns of the Sith Lord': good SWars extrapolation about the crew of the Death Star. '... Not Quite a Love Story': touching vignette about M'ress and her views on human crewmates. 'Funny Pages': these 17 pages alone are worth buying the whole zine to read. 'Helen': a serious story of Lasse, without Loom. Thought-provoking and insightful, not only into this character, but in the nature of relationships in general. Best of Zine Award. [4]

One of the identification marks of the Mary Sue story is the characterization of the regulars from the series. If Kirk, or Spock, or the long-suffering Nurse Chapel have been bent out of shape to make the hero or heroine look good, you know you've got one on your hands. Flypast has two. Both 'The Sword in the Can' and 'Red Magic' are of the Kirk-is-a-jerk school... All this just to make Lasse Virin and Lin Donovan, characters from Dietrich's universe of Enterprise grunts, look competent. Granted, Dietrich and Lin seem to be drawing heavily from military sources for their situations and characters, and any military has its share of yahoos and clowns in commend. But if the ST Kirk had been as 'petulant.' 'dimwitted,' prudish and cowardly as these two make him out to be, nobody would have paid any attention to the show... ' [Finally], 'Rebellion' by a 13-year old, totally inane and good for a lot of cruel chuckles at the author's expense. [5]