Friends Will Be Friends

Friends Will Be Friends is a slash anthology, a con zine, produced to be given to attendees and supporting members of Devacon. It also contains non-fiction articles.

Friends Will Be Friends 1 is 80 pages long and was published in March 1992. It contains the following fiction: 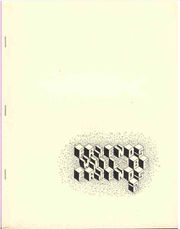 Friends Will Be Friends 2 is 60 pages long was published in March 1993. It contains the following fiction: 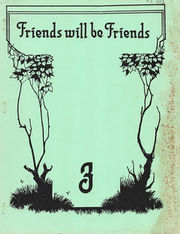 Friends Will Be Friends 3 is 60 pages long and was published in March 1994.

"The editor's thanks to all those who contributed material for this zine, especially Tamar for her artwork and Elspeth who pitched in with some last-minute typing and proof-reading. All other chores were carried out by Ye Ed and WoIfbane."

A 1995 flyer says that there was to be a Robin of Sherwood/Sherlock Holmes fusion in this issue called "Sherlock Hood and the Not Very Big Dog from Baskerville Forest." This story was ultimately not in this zine.

To those of you reading this at DEVACON 3, welcome, thank you for attending and have a great time. To those of you supporting us from a safe distance (?) - we're sorry you couldn't be with us, and hope you miss us as much as we miss you.

Most of this zine's contents are pretty well self-explanatory but that never did stop me making a few well-chosen remarks. In the non-fiction section, Sandi takes a second (for FWBF) look at the unhappy private life of Casualty's Charlie Fairhead and comes to a different set of conclusions; Henry introduces her latest passion, the attorney and the sheriff; Cimorene describes Messieurs Moon and Sardou and their intriguing relationship, and I indulge in some mild hysteria prompted by a set of BBC golf videos.

Of the fiction, another installment of the ongoing saga of Lovejoy and Alexander Felsham, 'Corporate Hostility', is included here at the special request of May who is The Reader of these stories! There's more; the next bit involves the search for a TV star's lost Bugatti and will be in print as soon as I can find the time to do something about it. 'The Fourth Star' only just made it into these pages; what with Transatlantic letters going by surface instead of air mail and the 'quake which fortunately left its author shaken but not stirred, it looked as though we might not get permission to print it in time. To my profound relief, however, the letter cane through at the eleventh hour. 'Off The Hook', 'Myth' and 'Tunbleweed and Turmoil' are little gems that arrived in response to my plea for submissions - thank you, folks. I'll be very good and not make the comment that occurs to me about Fulham centre-forwards (see 'Off The Hook') as among other things I'm supposed to be an Exeter City fain. (So my son tells me.)

I'll just conclude by repeating that I hope everybody reading this at DEVACON has a superb weekend; relax and unwind and get those mucky little brains ticking over, eh?

See you next year!

Friends Will Be Friends 4 is 58 pages long and was published in March 1995. It contains the following fiction:

Friends Will Be Friends 5 is 60 pages long and was published in November 1996. It contains the following fiction: