For other pages with this title, see Endgame.

Endgame is a Professionals slash Bodie/Doyle story by Tarot. 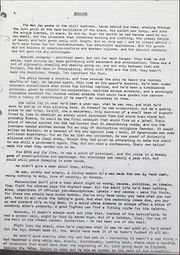 As you can see in some of the comments below, many fans attribute this story to Tarot's writing partner (Terri Beckett), something that is an error.

"B is prisoner in the Middle East and remembers how D died for a bomb. B went back to mercenary but got captured. He resists interrogation until they give him back D's necklace, which allows him to hear D in his head; then behaves so that they execute him."[1]

... because it is The Best—best written, best story, best blatant heart tugger—just, the best.[2]

The BEST story I've seen, without exception, is Endgame. It arouses sensations that may make one uncomfortable (personally I threw the whole thing across the room in a jealous rage at the talent of the author), but it is a beautifully written story. It, however, is not one of my favorites.[4]

...is incisive, brilliant, and absolutely chilling!! Bodie is dangerously insane for all the right reasons. The logic of his insanity leaves my hair standing on end. Yes, I knpw it's a death story and I loathe death stories—but it's too good to be ignored.[5]

There are those who refuse to read death stories. That is their perogative and, at least in this instance, their grievous loss. The author of this story has spun us an intriguing tale of a man who chooses his death, for reasons that seem sufficient to him and in a manner entirely consistent with his character, and has made it seem a completely understandable and not unattractive choice.[7]

[One of my favorite Pros story is] the original ENDGAME story, which again has to be one of fandom's "classics." I just wish the story had ended there, and not gone on to ridiculous extremes with all those unbelievable "sequels." [8]

...a death story that rings true. No histrionics, no curtain-chewing, just a good restrained portrait of a man going to bits.[9]

I did not believe any of the sequels to ENDGAME; ENDGAME is one story which did NOT need a follow-up. [10]

It took me at least 4 sittings to get through "Endgame" and it is only 27 pages long. This reflects how upsetting to me this story was. It is exceptionally finely written, by one of the best B/D writers there has ever been, but the subject matter was *so* grievous to me, I have only ever read it once. [Karen B] often tells the story where she burst into tears while reading "Endgame" on an airplane coming home from a convention. [11]

I hate the idea of losing one of My Heroes. And besides, anything sad makes me cry buckets and I hate doing that too. Having said that, I must immediately confess that one of the best stories I have read in this or any fandom is * Endgame *. It tore me apart, but it is magnificently written. [12]

I can, or at least have, enjoyed really really depressing death stories (can you all say "Endgame," class? I knew you could.) [13]

ENDGAME is an incredibly powerful piece of writing, but I've only read it twice in eleven years; the memory lingers on. However, that's because it's a death story, not that it's one of the most convincing stories around. [14]

The story I remember most clearly was the first piece of fan fiction to ever bring tears to my eyes, the beautiful ENDGAME. To me, this is the clearest example of how it is possible to write fan fiction that is also a completely adequate and elegant piece of literature. [15]

I don't think there is one 'best' story: twenty, possibly. ENDGAME is an incredibly powerful piece of writing, but I've only read it twice in eleven years; the memory lingers on. However, that's because it's a death story, not that it's one of the most convincing stories around. [16]

My goodness, your description of your gut reaction to ENDGAME sounded very familiar, especially the bit about going "cold" when you come across it. It's written by one of my most beloved writers, but I've only read it--word for word--once. It's a killer, in more ways than one. [17]

Actually Terri Beckett co-wrote (maybe even wrote the entire story, I can't remember exactly what she said) Endgame (she's Chris Powers writing partner). Chris wrote Masquerade and Tethered Goats alone; Terri hated the series so much and hated Chris writing it, she inspired Endgame. I love Terri as a person and for writing some of the best S/H around (she and Chris are also known for their Vas and Dex series which is based on S/H), but I don't thank her for the fact Chris left fandom after writing 2 of the best novels we have. Terri told me she had dated someone who looked exactly like Lewis Collins (and perhaps acted like him), and it left her with such a dislike for the Bodie character, she couldn't stand the series. So in Endgame she killed them--and did it beautifully. I read it once, but never again because it threw me into a blue funk. I mean she killed them so dead, it became true. And boy did she make my Bodie-boy suffer. I read it in 82 in a van coming home from Mediawest, and everyone wanted to know why I sat there blubbering as if my best friend had died. Well, not mine, but Bodie's had died--and then he did. I like angst too, but when it's so well done, it's a real downer. Thank god I also read Tethered Goats the same weekend. Actually I had blocked out the fact CP wrote Consequences since I don't like it. Are you sure Chris wrote Consequences alone? I have a feeling Terri at least helped since she told me she was the one who had conceived the idea of The Game. Plus Bodie was so awful, I'm sure Terri had a hand in writing it. [18]

In some sense, I think Chris Power's "Endgame" is the perfect Pros death story. It has closure, it has hints (but not certainty) of an afterlife where the two of them can be together, and it's believable. (Well, I believed it.) Caveat: This was the very first Pros story I read, even before I saw any of the episodes, so I may have imprinted on it in some fashion. [19]

Another powerful, clever, well-conceived story. People find [this story and Consequences] disturbing because they are powerful stories.... And speaking for myself, they strengthened my commitment to fandom, rather than the opposite. No, it wasn't *my* version of the characters. No reason it should be. These are two moving, gripping and even terrifying stories that I could never have written and am glad I didn't miss. [20]

I'd almost put The Pillory on a par with "Endgame", which is another story I cannot re-read because it is too painful to do so.[21]

Warning for character death. You cannot read this fic without feeling every inch, every millimetre of Bodie's pain. And therein is why I adore it: because some writers can do that, they can drag you so far in that every word either hurts or makes you sing and that is what Tarot does here. This is one of the very first Pros slash stories, a classic in the genre, and wonderful in its own right.[22]

I know many people have a horror of death stories, but I like them, if they're well written and not sentimental. And with B/D I never see them living happily ever after or even making old bones, poor sods. I think they'll die young - and most likely violently.

I see Endgame and the fic I recced before, These Things Do Not Remember You by Gwyneth Rhys, as sort of bookends and mostly read them one after the other. Both deal with the death of one partner and how the surviving one does - or rather doesn't - cope and finally dies, too. Very depressing, you might say, but I find a sort of dark satisfaction and even comfort in the fact that they're not able to exist on their own.

And both writers manage a beautifully fitting character portrait in their respective stories. I love them both to death. ;) [23]

This is a tough one for me...I don't like death stories at all, but there is, as you say, a dark and strange comfort and satisfaction in the reaction of the one to the loss of the other...if I have to go there, this pushes lots of buttons for me. I think it's brilliantly written, and I always love Tarot's characterizations. And it's one of the earliest Pros slash stories, and a classic in the fandom, so I think of it as a must-read - even though I tend not to re-read it. I can't really even let myself think about it *too* much. But it "lives" in my head nonetheless.[24]

I've always really liked Endgame. It feels triumphant at the end, despite what happens. I have not a doubt that Bodie is, essentially, with Doyle. *g* And the flashback sequences are wonderful, if heartbreaking. It's a story that shows exactly how much they loved each other--how could I not love that? [25]

I think the power of this story is that it could have been, you can feel it really could have gone that way, should Doyle have been killed. The characters are written very true to life, all of them, and the descriptions of the surroundings are so believable. And even though it is sad, the story is brought neatly in a full circle as Doyle was there for Bodie at the end, and whether it was just his madness telling him so, or if he was really there, then all that matters is that in Bodie's mind they were both reconciled.[26]

The first Pros story I read -- before I'd ever seen any of the episodes -- was "Endgame," by Tarot. I'd been in B7 fandom for years, but was ready for a change. I'd picked up Camille Bacon-Smith's Enterprising Women at the San Francisco Worldcon, which means it had to have been in 1993, and there was a three-paragraph excerpt from the story in the book. That excerpt set off all my hurt/comfort alarms (in a good way), and it turned out a friend in B7 fandom had a copy, which she photocopied and sent to me. I loved it, even though it was a death story -- the death story, one might even say. After that, I wanted to know more about the characters, so (if nothing else) I could at least keep straight which one was Bodie and which Doyle.[27]