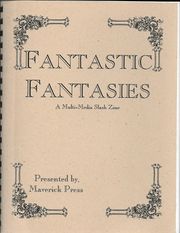 It is a special edition of Dark Fantasies containing stories from SF universes and supernatural universes. Some of the stories have a dark side as found in Dark Fantasies, but many are simply excellent slash stories. [1]

Fantastic Fantasies is similar to the same editor's Dark Fantasies except that not all of the stories in it are of the dark nature-- including both consensual SM stories and rape stories-- associated with DF. The two B7 stories are dark, however, in those two respective ways. In "Reparations," Tarrant tries to patch up his established sexual relationship with Avon after Avon has booted him out of bed for the destruction of the android. He offers to be Avon's obedient slave for one night-- and gets rather more than he bargained for. It turns out that Dorian left behind a closetful of equipment, which Avon puts to use on Tarrant.

(One caveat: the layout for this story includes some double spacing that is not correct, or at least wasn't in the original ms. There is only supposed to be one actual break in the story, and it is marked with asterisks.)

"Beaten" also involves a bargain, but a much darker one. Blake gives himself up to Travis, knowing that he will be tortured to death, in return for the lives of Avon and Jenna. Travis makes Avon stay behind long enough to not only witness his sexual torture of Blake, but participate in it himself. The story ends bleakly, with Blake still in Travis's hands, and no prospect of rescue.

I'd very much like to hear what Blake fans think of this story. It's a lot like the darker sort of BUARA story (what Pred'x's drinking game in SC 11.5 calls "Poor little Kerr's been hurt-- and here comes some more!"), but with Blake as the sufferer instead of Avon. But does it give the same kind of erotic kick that BUARA does for its afficianadoes? Personally, I find myself feeling too sorry for Blake to enjoy it as a turn-on, but is that just because I'm not primarily a Blake fan and so don't love him enough to want to hurt him? (I do love both Avon and Tarrant that way, and Susannah Lucci-loves Vila that way, to judge by her deservedly prizewinning "Tears of the Sun.")

I've read two other stories in FF: the X-Files (Mulder/Krycek) story by Cora Dee, which I didn't care for; and the Voyager story (Paris/Kim), by Cara J. Loup, which is excellent and not particularly dark. I know a number of B7 fans are Voyager fans too, so you'll want to check this one out. I read the story because I had noticed that the author won some awards in Star Wars fandom as well. I can see why! Wish we could lure her into B7. [2]