Ee-Miniar is a Star Trek: TOS gen anthology. The editor says in issue #3 that it is "published about twice a year." 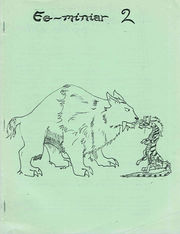 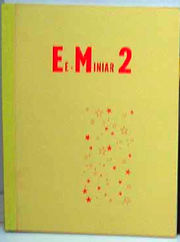 front cover of issue #2, most likely a later reprint

Ee-Miniar 2 was published in April 1979 and contains 95 pages. It is "Dedicated to the Saturday Night Dungeons & Dragons Circle."

The lettering is by Michael Collins, the Ee-Miniar logo by David Birr.

Hello — again, for those of you who vaguely remember Ee-Miniar #1 — and for the first time to the rest of you.

I hope you enjoy Ee-Miniar #2. This issue marks several changes — firstly, this Issue is the first time I've used offset printing; or and IBM Executive, for that matter, as some of you may be able to tell. Secondly, this issue is not solely devoted to Star Trek. My own interests are wide and varied, and I'd like to have Ee-Miniar reflect that.

A few notes on formats and errors -- interspersed throughout this zine you will find occasional zine listings. These are all zines that I have read. The format and arrangement of these listings is an idea borrowed from Johanna Cantor of Yeoman Press. Also, in Shadow across the Stars, you may notice that the spelling of certain words changes. I have two typists, myself and my co-editor. David Birr spells certain words in the British manner. C.R. Americanizes them. I don't.

I would welcome submissions, LoCs, etc. for future issues of Ee-Miniar. I'll consider everything, science fiction, fantasy, and so on. To my way of thinking, you can never get too much variety in a zine. Before anybody asks; no, I'm not easily shocked. Contributors — that is, authors of anything I publish — recieve a free copy of the issue your 'article' is published in.

If everything goes well, Ee-Miniar #3 is due out December 1979. However, I'm beginning my master's thesis and the amount of free time t have is strictly limited. Thanks for buying Ee-Miniar.

I picked up E-M #2 at 2-Con, and don't know I have been so impressed with a "new" (to me) zine—surely "David Birr" is a pro-writer's psuedonym [sic]? He should be writing professionally if he's not. Of course, like most male pro writers his characterizations lack warmth, but his hardware stuff seems excellent!

I don't know when I have ever read a funnier or more successful story than "The Last Word"—the Spocker to end all Spocks! I like Maclamore's [1] series, too—undoubtedly a good marysue, but who cares when it is so entertaining? [2]

Aside from a few typos (or lapses into the Vulcanur), the technical side of the zine was very professional. The illos were only adequate, but, on the whole, there was really very little to complain about.

There was very nearly nothing to complain about on the creative level, either.

Phaelra was a cute, entertaining bit. A character piece, not a story, but I like such pieces when they're kept short like this one.

Shadow Across The Stars rates right up there with all the other SF adventure I've read- It ran along at a good, brisk pace, and Birr demonstrates a good deal of imagination throughout the story, especially in his creation of alien languages. The story's only fault was that the solution to the problem, while totally acceptable, was discovered too quickly once Colt and co. landed on Refuge. After all that build-up, snap! the problem' s solved. It should have been much tougher than that. I also wondered why the bad guys had started blowing up ships in the first place,

A Fear of the Dark was absolutely top-flight Star Trek, as well as being great SF. All the characters were well-rounded and sold, (Airalynne is a delightful creature), the plot intriguing, and the resolution to the conflict was satisfactory. What could have been another "the girl gets Spock" story instead totally credible and justified all the way down the line, the bedroom scene between Spock and Airalynne being done with great good taste and absolute correctness I enjoyed reading it very much.

The Concert might have been more interesting it it had had some kind of point. And who is Lt. Il'Kik, and why d'oes he (sic) matter so much? Unlike Phaelra, which got away without having much of a point because of its length, and because it was a "one-act" piece, The Concert rambled incoherently along before it finally ground to a halt.

The reviews were all right, but should have been more comprehensive, and should have covered more current releases.

The Last Word, while nicely written (except for choppy transitions), was—how can I say this delicately?—really an alternate ALTERNATE ST universe story. I wondered why on earth Spock would act Human, even if he should hapen to physically turn Human. But, once you accept the "allergic to himself" premise, it all becomes clear; he was also allergic to, and rejecting, his Vulcan ways of thinking along with his Vulcan body. On all fronts, I really had to abandon my picture of "proper" ST, but, once I did that, I could let the story entertain me.

I have deliberately refused to comment on the poetry, because I dislike poetry on principle (except limericks and such-like) and am unfairly prejudiced.

In my opinion, a zine that's 96 pages long with only one clinker is a rare treat. Keep up the good work, Deborah! [3] 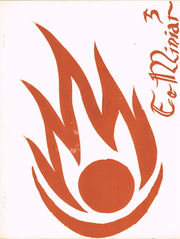 cover of issue #3 is a screenprint by M.T. Pawloski ("Re-Entry")

This issue was dedicated to "... Jacqueline Lichtenberg, who gives us all more encouragement we can handle, and, as always, to the Saturday Night D&D Circle."

The one thing I want to apologize for is the fact that we could not print all of "Expedition to Mahassarat". What you will read is the first half of the story. The second half is about two-thirds complete. We simply couldn't get it finished in time, and since I'd already accounted for it in page count, and rather than leave it out and shorten the zine twenty pages, we put it in. I don't expect this situation to recur.

We are still, sometimes rather frantically, trying to collect submissions. Fiction, short or long, is always welcome, as is almost anything else you can write-—but we'd, especially like letters of comment. You people do exist out there, don't you? Please, we want to hear from you! When we print a loc, its writer gets that issue free . Think of it as a free zine.

A couple of the things I hoped to have in this issue didn't make it, primarily because of a strain in time. Next issue I do hope to have the first section/story of Playground, which is a set of stories revolving around a school that teaches young adults about life and freedom. It should probably be out in August, 1980 but I'm not making any rash promises. One note on submissions: where artwork is concerned, I know it's difficult to copy if you can send a clear photocopy, that'll do; if you send an original and you have the money, send, it registered mail, and when I return the original, I'll mail it in the same way. 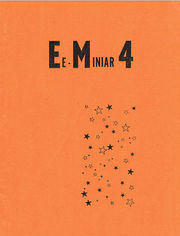 Ee-Miniar 4 was published in April 1981 (the editor had been aiming for August 1980) and contains 113 pages. This issue has some art by Jean Coleman and Cayte Haast Ford.

This was the last issue.

The "comment" in the beginning is by Cayte Haast Ford, who co-edited this issue:

This is not an editorial. This page is here because every 'zine has one.

With the help of Becky Rouse and Jean Coleman, I took a bunch of neat stuff and put it together. Editorial guidance was by phone per Deborah Laymon creator of Ee-Miniar.

Our primary problem is one of logistics as Deborah now lives in Pontiac and co-editor C.R. Maclamore lives in Detroit.

Well, here we are in Mount Pleasant, folks. Frankly two months ago I couldn't spell editor and now I is one.

What we have contained within is a wide variety of writing-some novice and some "pro".

The second part of"Expedition To Mahassarat" is our first offering. We apologize, again, for having to make it a two-parter due to solar-flare induced tardiness suffered during the compiling of Ee-Miniar 3. This time you got the end, YEAH!

I am unsure as to what my association with Ee-Miniar will be in the future as I am going to start a 'zine of my own called 'Noids and 'Droids. N&D 1 will be out in December 1981 and N&D 2 will be out in May 1982 unless I am captured by aliens. [4]

The Enterprise was traveling at warp 5 to get to the planet Zymurgy. Their urgent assignment was to find out what caused the planet's bees to start killing it's people.

On the bridge, Jim Kirk was giving orders, "Lt. Jammie Say, I'm going to the cafeteria for a cup of coffee, and then to my cabin for 8 hours of badly needed sleep." To tired to get up in a hurry, he remained in the command chair for a few more minutes then he said, "Yeoman Tammy Jean, post a notice. There will be a staff meeting at 0800 standard time. I will fill everyone in on our assignment then." He stopped the yawn that was nagging at him to say, "Lt. Ray you are in command. Good night." Then he left the bridge.

At 0800, he was in the briefing room. Spock, Scotty and Bones had come in together. Bones and Spock were having a heated discussion, "Doctor, the fact my heart is where your liver is is an advantage." Spock said, very sure of his reasoning.

Bones still wanted to know why, "I don't think having a heart where my liver is could help much." Jim put a stop to it when they walked through the door.

Uhura and Sulu came in behind them.

[First paragraphs of the rewrite of "T'Pau, Help!"]:

On the bridge of the Enterprise, Jim Kirk dictated into his log. "...therfore we are making for Zymurgy at warp eight, and should arrive by 0900 tomorrow. Hopefully, we will be able to discover what has caused the bees to start killing the people of Zymurgy, and put a stop to it quickly." He signed off and sat back in hie chair. Plagues of killer bees, he thought. What next?

He sat up. "Yeoman Tammy Jean, post a notice," he ordered, "There will be a staff meeting at 0800." He handed her a data cartridge. "Everyone is to have studied this information and be prepared to discuss possible courses of action." The Yeoman took the cartridge from his hand. Jim stopped the yawn that was nagging at him to say, "Lt. Jaramie Ray, you are in command. Good night." He turned and left the bridge.

At 0800 he v/as in the briefing room. He looked around;Chekov was late again, "Has anyone seen Mr. Chekov?"

Sulu laughed. "Maybe his lady companion wouldn't let him get up again."

In that case. Jim thought, he'd better keep his reason to himself. The only company I had last night was this damned data tape. Everyone looked up as Chekov hurried in with a, "Sorry I'm late, but —"