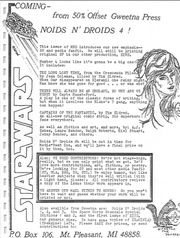 'Noids n 'Droids is a gen zine of fiction, poetry, art, and articles.

The first four issues were multimedia (mainly Star Wars and Star Trek: TOS) and original science fiction. The last issue was all media, as the editors steered all of the science fiction to their sister zine, which was titled Zine.

The zine was originally offset. A later edition has two handwritten pages with additions, corrections to art credits, small ads, and some addresses. The editor begins with "Thanks to the miracle of photocopy, the editor can now review the material being copied and slyly insert this small addendum..." 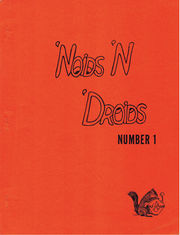 'Noids n 'Droids 2 was published in May 1982 and has 159 pages. Star Wars, Star Trek and original science fiction.

We are looking forward to contributions and letters of comment. As indicated we are of the mixed media (mongrelized?) variety, of fanzine. To simplify things we are now labeling Star Trek and Star Wars stories for the convenience of those "flipping through"Any stories not so labeled (unless its real obvious like Tim's M-2 page SW comic strip) are original material. All of us here at ole "Gweetna" enjoy putting out this 'zine and enjoy communicating with fans, particularly at conventions. For your information we take an occasional dip into the "R" range, but most material is "PG". In addition, the literary efforts are not too heavy or profound, just fun. However, if some thing deeply introspective should come our way, we will give it consideration. 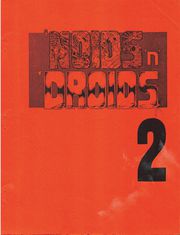 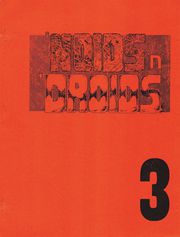 The art is by Tim Eldred, Kiel Stuart, and Jean Coleman.

DONATE BLOOD. Send us some sort of proof [of your blood donation] and we will send you a free copy of 'Noids 'N "Droids #4 to the first five donors. It's the HEINLEIN TRADITION!

NOTE: The comic by Eldred is broken into three pieces in this zine, and therefore takes up a LOT more room than what the table of contents imply. 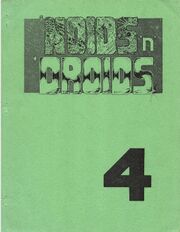 "This issue of NND includes our new emphasis on SW and media fanfic." 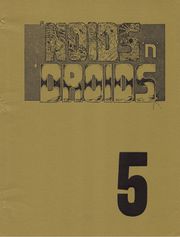