It was published in the print zine Naked Times #3. 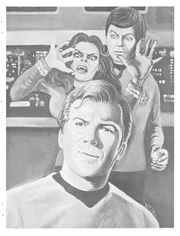 art for this story in Naked Times, by Michael Verina 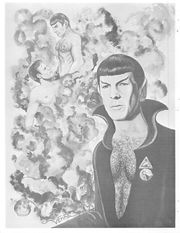 art for this story in Naked Times, by Michael Verina

"This story introduces the concepts of xenophobia within Starfleet -- the idea that perhaps a few high-ranking officials still haven't learned to control their instinctive fear of that which they do not understand. These prejudices come to disrupt the lives of Kirk and Spock -- personally as well as professionally -- and their very existence is threatened, as well as the existence of Starfleet as they know it."

I didn't realize that this was a part of a continuing series when I first read it, but except for a few head scratching moments, pretty dear and able to stand on its own. A woman and some others come on board the Enterprise. The woman is Spock's replacement as Spock has been in command of the Discovery for a while. Some exposition, presumably from the previous parts of the story are done with a lot of flashbacks.

Spock is going into pon farr and since he and Kirk are bonded and are separated, will die unless consummated.

A group of extremists, plotting to take over the Federation, are on board the Enterprise. Kirk and company have to mutiny to get control and get to the Discovery before Spock goes into madness and death.

The Intrepid is found at the barrier of the galaxy, Spock descends into the fever and a Vulcan woman healer uses a very unique method of saving Spock 's life utilizing Garth of Izar. (It's a long story, don't ask.) Suffice it to say, the healer is a very fast learner.

All seems well until a bunch of starships show up and I find out that I'll have to read the next part somewhere to find out what happens.

But all pretty interesting and a quite exciting story. Don't tell me what happens. [1]

Great story: 'Double Vision' which is part three of a still to be continued series has a welcome change, a K/S scene that isn't male to male! Good characterization and filling out of other characters makes one interested in the future of Spock's new ship's crew: Slarn, a directional telepath; T'Reuel the healer, and even Stonn! [2]

Part III of the Outworlds series. In this installment: A faction of "xenophobiacs" headed by Admiral Sternes is plotting to take over the Federation. Kirk and Spock are bonded, but Spock has left the Enterprise to take command of the Vuclan exploration ship Discovery. The timing of the separation is decidedly unfortunate, as Spock is fighting off his pending pon farr and because of his bond with Kirk cannot take another. Among his new crew, Spock finds friendship in his ship's healer T'Reuel and second-in-command Slarn, a directional telepath, both more or less outcasts on Vulcan due to their unusual mental powers. And an enemy in the openly insulting Stonn. Working in the neighborhood of the galactic barrier, Discovery finds and attempts to rescue the Intrepid, whose crew is now hopelessly insane except for its commander, Garth of Izar. T'Reuel manages to get reluctant Spock through his ordeal alive with the help of Garth's knowledge of cellular metamorphosis. Meanwhile, back on Enterprise, Kirk is feeling the effects of Spock's condition while he and his loyal crew maneuver to put Sterne's planted henchmen - including hostile Areela Noonan, Spock's replacement - out of commission. They head out to find Discovery (and Intrepid) but have barely made contact when Enterprise is surrounded by 5 Federation warships... [3]