Dorian/John Kennex is a slash pairing of Dorian and John Kennex from Almost Human (TV series).

John and Dorian are a human/android buddy cop duo who are paired together when John returns to the force after losing his right leg. The main source of conflict in their relationship is John's contempt of androids - something that gradually changes as he warms up to Dorian throughout the show.

Though the show did not become popular enough to get a second season, those who did join the fandom were quick to jump on the ship. John's contempt slowly transforming into friendship and protectiveness were considered great shipping fodder, and so were the numerous sexual innuendos between the characters.

TVLine's Ship Shape post on John/Dorian reflects what the fandom found so shippable about the pairing:

THE LATEST - An MX trash-talking Dorian’s inferior programming takes a bullet to the face, courtesy of the DRN’s touchy (and trigger-happy) partner.

AWW! - “You like me,” Dorian teases Kennex, who gruffly denies it… But you’re a terrible liar, John.

THE FORECAST - Cyber-sunny. The partnership between these two just keep getting stronger (whether Kennex admits to liking it or not). 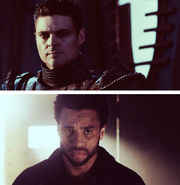