You may be looking for Dark Fires, a Dark Shadows zine, or The Dark Fire Saga, a Star Wars zine.

From a distributor, Agent With Style: "With stories that revel in the dark fire within us all, this slash zine contains several tales that use the theme of 'the dark meld' between Kirk and Spock, while other stories take some truly fascinating looks at the darker or kinkier side of K/S."

From a 2007 ebay seller: '"WARNINGS : THESE STORIES ARE NOT 'NICE' . Warnings include torture, rape, incest, coersion, piercings, graphic descriptions, partner betrayal, bondage, Mirror Universe, alternate universe. Some stories have 2 or 3 of these warnings in the same story. No death stories, & all have K&S together at the end, in most, K/S is the only pairing at all."

Summaries below by Gilda F. 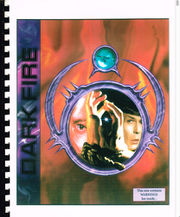 In the editorial, the editor dedicates this zine to the vid Closer saying that the "video was a major inspiration for this fanzine. If you haven't see it, you absolutely must."

Would you like to see another zine in this series? If so, I need stories and artwork. Here are my guidelines: As is doubtless obvious, I love emotional intensity and angst. I'm looking for stories that are emotionally and psychologically complex, and that can include rape and other violent themes. I am most interested in "our" Kirk and Speck, but will accept Mirror and AU stories, as well.

I will consider stories that have appeared on the internet if there are new scenes written exclusively for the zine. I would ask that stories included in the zine not be posted to the net for a period of one year after publication of the zine.

I will consider the following types of stories for "Dark Fire". All stories must be K/S. If there are other partners involved, the story should end with Kirk and Spock together.

Stories that are done just for the purpose of having K&S perform a particular sex act—I am interested in "why" as much as "what".

If you have an idea for a story that doesn't fit in with any of the above—just ask.

Editing will be done via email. The author will receive a hard copy proof of the final version via snail mail for approval.

See reactions and reviews for In Their Velvet Prime.

See reactions and reviews for Trespassing on Heaven.

See reactions and reviews for The Strangest Thing.

See reactions and reviews for Restraint.

See reactions and reviews for The Agent.

[art by T'Guess for The Strangest Thing]: Had I run across this story by T’Guess (“The Strangest Thing”) in a zine generally devoted to lightness and love, I might have been disappointed. But that was not the case. It’s in a zine advertised as being dark in nature, so I was forewarned. The account of Spock’s imprisonment and torture by Romulans is well written and descriptive to a fault. My dislike of these evolutionary cousins of Vulcan has grown by leagues as I read what they are capable of doing to a starving, dying man. Spock has lost even the hope of being rescued, but true to his nature, Kirk has not given up. Nor has Sarek—and it is through both their efforts that Spock is freed from captivity. However, he is far, far from being free of the damage that has been inflicted upon him.

Throughout his imprisonment, the story is liberally punctuated by T’Guess trademark art, this time frequently featuring Spock tied, in pain and defeated. The pictures are applicable to the story, but that does not make them pleasing to see.

There is a notable exception: a beautiful piece of black & white art depicting Kirk and Spock in better times, actually illustrating a dream Kirk has of better times. The dream sequence describes the reason for the 20th century attire, beginning with an absolutely gorgeous Kirk in a sleeveless black tee shirt, followed by a stunning Spock in a white tee. The lighting – for which T’Guess is famous—is magnificent and shows off every great feature in both their faces. I can’t tell you a time when they’ve looked more appealing. They aren’t touching, but perhaps that is a plus because it would have been a shame to see scorch marks on the page! [1]

Dark Fire 2 has art by T'Guess (front cover) and AcidQueen. It was published in July 2007 and contains 222 pages. 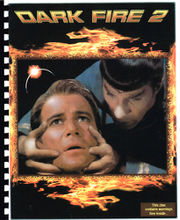 cover of issue #2 -- "I‘ve long admired the way T‘Guess captures mood and controls light in her images – this is a perfect example, and so fitting for a zine that looks at the dark side. Surrounded by flames, a very troubled-looking and focused Spock grasps Kirk‘s head in the meld position while Kirk‘s eyes search for something illusive and beyond the range of normal vision. The image is a powerful one, suggesting a certain pain and great intensity. Even the text, shaded with the color of flame, is fitting." [2] 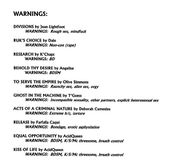 the warning page, the last page in the zine

See reactions and reviews for Divisions.

See reactions and reviews for Research.

See reactions and reviews for To Serve the Empire.

See reactions and reviews for Behold Thy Desire.

See reactions and reviews for Acts of a Criminal Nature.

See reactions and reviews for Ghost in the Machine.

See reactions and reviews for Release.

See reactions and reviews for Kiss of Life.

[art by T'Guess]: frontispiece -- Here‘s a study of all the mindmelds Spock has performed in the course of his career on the Enterprise, all neatly arranged around an abstract image. It was only after gazing at the central picture for an extended period that I realized it was Spock‘s hand reaching out to me through the swirling pattern, his fingers in the meld position. This is worth some close study. Ghost in the machine – Dark Fire 2: I haven‘t read the artist‘s accompanying story yet, but love the way she‘s designed this piece. I see it as a ―book jacket‖ design, with the title artistically displayed. I‘ll bet the close-ups of Kirk kissing Lenore Karidian and Spock kissing Zarabeth have something to do with the story – perhaps they are memories. These are overlain by a picture of Spock seated at the science station wringing his hands – all very suggestive. The featured image of Kirk and Spock is somewhat severe with both frowning and apparently involved in a crisis situation. Now I can‘t wait to read the story! Between Page 174 and 175 – Dark Fire 2: Here is another picture that is uniquely matched to ―The Ghost in the Machine‖, along with a quote. Kirk is in extreme closeup, looking haunted and cautious – only a shadow of Spock lies behind him. Is it Spock or an illusion? There‘s a background reminiscent of the air sparking with electricity. Exciting and stimulating to say the least. [3]