The Strangest Thing is a Kirk/Spock story by T'Guess.

It was published in the print zine Dark Fire #1.

"It takes Spock being brutally tortured and humiliated for Kirk to realize his love for him." 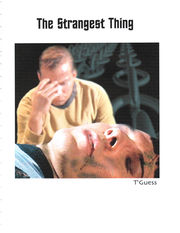 art for this story by T'Guess

I have to start off this review by saying I am a big sucker for a good hurt/comfort story. After all, it was those types of stories in all those gen zines that gave rise to K/S and I for one am glad that they were and still are a big part of this unique fandom. After a fashion, they even earned their own labels, depending on who was the one hurting, i.e. either it was a "get Kirk" or "get Spock" H/C story. In this particular case, it is definitely a "get Spock" story and boy, does he get "got". The author's skill and talent captures the reader and draws her into the tale so that she suffers right along with our poor Vulcan. The torture he endures at the hands of his Romulan captors is vividly detailed in all its painful aspects and when he is finally rescued, the reader is almost as relieved as his rescuers that his horrendous ordeal has at last come to an end.

So after all that hurt and with Kirk and Spock finally reunited, it was at this point where I was really looking forward to the comfort that makes these stories most enjoyable for me. But I have to say, in this particular case, I was somewhat disappointed. Kirk's first encounter with Spock ends as abruptly as it begins when Spock suffers a flashback and reacts to Kirk's presence in an unexpected and shocking manner. After that, even though Spock improves somewhat, both physically and mentally, his relationship with Kirk continues to deteriorate and the one time they do manage to come together leaves the reader feeling unfulfilled as nothing is resolved. And this trend continues right up until the end of the story, where once again there is no resolution, only the good chance that they may never see each other again.

Now I know that all K/S stories, such as Shelley Butler's "Honeymoon" don't always end up with Kirk and Spock living happily ever after, but for me, with this story I get the impression the author was so focused on the "hurt" aspect, she either forgot or didn't care about the "comfort". As a result, the latter part of the story left me feeling like a big something was missing and that Spock suffered through all that torment for nothing. I wanted my reward, I wanted Spock to get his reward, and yet both of us came up empty. It was a big disappointment for a story that started out so brilliantly, only to basically fall apart toward the end. For me, there was no real resolution, no sense of completion, only a feeling that Spock's suffering was just going to continue and that the one person who could help him heal would never be given the chance to do so. Depressing, to say the least. [1]

This story has a lot of warnings - see below. This story is not for the fainthearted.

"The Strangest Thing" is a powerful, brutal and uncompromising look at rape and torture and the long-term consequences to the victim and to his closest friends.

Spock is imprisoned in a Romulan prison, and subjected to their harshest interrogation techniques. On the Enterprise, Kirk uses every resource he can muster to find and rescue Spock; he involves both Sarek and the Romulan Commander in this quest. But will they be in time?

TGuess does dramatic tension brilliantly, and the rescue sequence is edge-of-the-seat all the way. After the rescue, when many writers would include a few pages of "comfort" and have everything be just fine again, she looks at the hard truth that recovery from this type of trauma isn't quick, or easy, and that the love and caring of even those people closest to someone isn't always enough.

TGuess explores the complexities and consequences of lost opportunities and unsaid words, and while she holds out hope she offers no easy answers. [2]

[art by T'Guess for The Strangest Thing]:

Had I run across this story by T’Guess (“The Strangest Thing”) in a zine generally devoted to lightness and love, I might have been disappointed. But that was not the case. It’s in a zine advertised as being dark in nature, so I was forewarned. The account of Spock’s imprisonment and torture by Romulans is well written and descriptive to a fault. My dislike of these evolutionary cousins of Vulcan has grown by leagues as I read what they are capable of doing to a starving, dying man. Spock has lost even the hope of being rescued, but true to his nature, Kirk has not given up. Nor has Sarek—and it is through both their efforts that Spock is freed from captivity. However, he is far, far from being free of the damage that has been inflicted upon him.

Throughout his imprisonment, the story is liberally punctuated by T’Guess trademark art, this time frequently featuring Spock tied, in pain and defeated. The pictures are applicable to the story, but that does not make them pleasing to see.

There is a notable exception: a beautiful piece of black & white art depicting Kirk and Spock in better times, actually illustrating a dream Kirk has of better times. The dream sequence describes the reason for the 20th century attire, beginning with an absolutely gorgeous Kirk in a sleeveless black tee shirt, followed by a stunning Spock in a white tee. The lighting – for which T’Guess is famous—is magnificent and shows off every great feature in both their faces. I can’t tell you a time when they’ve looked more appealing. They aren’t touching, but perhaps that is a plus because it would have been a shame to see scorch marks on the page! [3]

Bright Lady Mother, I've been cogitating on FB for this one ever since I got my copy of the zine it's in. Oh. My. Frelling. Gawd. Mit pictures yet, I‘m telling you. T‘Guess provided haunting and original artwork -- to just call them photomanips is to do an injustice, these are lovingly crafted pieces of art, and they fit the story perfectly.

I thought I was mean to our lads -- oy vey is mir! And yet every tiny bit is *right* and *true.* Every character, every scene.

Briefly, Spock is captured by the Romulans as a spy, and this time he‘s handed over to the guards at a Romulan prison. Bad Things Happen Here. Seriously, Not For the Faint of Heart.

This story hit me like a photon torpedo. In the first week I had the zine I must have read it at least a dozen times, probably more. It evoked certain past experiences in a very vivid way. I kept re-reading it, and it kept right on gobsmackin‘ me every time. And I salute and applaud T‘Guess for it. I consider this to be one of the finest stories I have ever read about the effects of torture, the nature of cruelty, and what it really means to be a sapient, conscientious, honourable being. I think this story should be mandatory reading for every single being out there who thinks torture is useful—and any of them that still say so after the reading should be required to undergo at least one waterboarding session in which they go all the way and fucking drown.

It‘s also one hell of a K/S love story, in its own original way.

Okay, various and sundry spoilers of sorts, below.

The waterboarding scene: the first time I read it I actually had to put the zine down, go outside (at 2am) and breathe the cold fresh dry mountain air because I could fucking *feel* the air hunger, the fear, the desperation...

I drowned at the age of ten. Not almost, not partly, I went the whole way. At that, I'm one of the lucky ones: I *was* dead, but the jumpstart worked and here I still am. But T‘Guess got every single sensory detail absolutely correct. Drowning, by whatever means, is a terrifying and painful experience. You don't even start the sensory fade until it's over, until you take that one last gasp for air, only to find that even though you managed to break the surface one final miraculous time, the air won't go down yer throat because your lungs and chest are already full of water. It hurts like fire and ice, your lungs burn when the water hits them, plus every cell in your body is screaming and you can hear and feel them all; even then, as I fell down toward the bottom of the lake again, I was completely aware. Totally confused of course -- nothing rational going on by then, pure terror -- but still aware, just -- no more strength left. About there, my mental tape recording simply goes blank; it restarts with me on the dock surrounded by uniforms, sore as hell and yarking half the lake outta my lungs.

A man I never got to meet happened to see that last non-gasp of mine out of the corner of his eye, among a crowd of about a hundred others who saw nothing. His reward was that I came within a cat's-whisker of drowning him too -- the autopilot found more strength somewhere and was Not Willing To Quit. I was offline by then. Ten year old, seventy-pound kid, thirty year old, hundred and fifty pound athlete -- the terror when you cannot breathe is that strong. And T‘Guess got it in one take.

I salute thee, O Writer. <Puts his paws in his sleeves and bows>

I also think the author got the aftermath perfect. Rescue is not the magic fix-all of childhood games. The way Spock blames all of it on himself no matter what anyone says, the way that, afflicted with flashbacks, he retreats back into depression and pain and loneliness, because at least these are familiar, known quantities, he can count on them being a certain way, where to open himself, to take any risks again, is too terrifying. He can't believe that he didn't deserve what happened. He can't even find it in himself to direct his anger where it belongs, on the monsters who did this to him, because in his own mind he deserved all of it. He was arrested for spying, and he was in fact spying, so he must have deserved it.

He would blame himself this way, exactly so. That‘s how it works with psyops. Whether the abuse is physical, emotional, mental, or all three doesn‘t matter a lot in the end. The worse the victim is treated, the more they feel like it must somehow be their fault and if only they could behave better, satisfy the abuser‘s demands better, be more submissive, it might stop.

The scene where the Romulan Commander visits him before he‘s rescued -- brrr! And later, when he learns of her death, his reaction is bang on. His decision to return to Vulcan unfolds with that horrible slo-mo inevitability shared by the best Shakespearian and operatic tragedies -- you know how wrong this is, you see it coming, and there's Not a Thing anyone can do to change it.

And then, right about where I was wondering if I'd need a tracheotomy to breathe through all the <ahem!>tears and wheezing and snot ;-)>, comes the little bit where he finally lets Jim comfort him, just a bit, from pure exhaustion and despair, he's too tired to fight any more. And Jim does the one perfect thing, as he's always done, as he always will.

After the long, dark journey, a bit of hope. Awesome shit. [4]