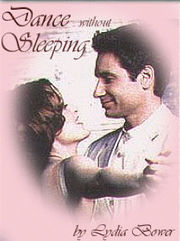 Dance Without Sleeping is an X-Files story by Lydia Bower. It's a songfic inspired of the song by Melissa Etheridge and set in the cancer-arc.

All four stories have been translated into German for the World of X fan fiction archive by fans dana d. and Scout.[1]

"This is the first of what will be a series about how Scully's cancer might conceivably change her life and the way she lives it. It is told in the first person and each piece in the series will be a journal, of sorts. I'm already hard at work on the second piece and hope to have it out to y'all within a week. I'm not trying to be cruel--I just want to take this whole issue very slowly--just as I'm sure CC and company will do. Expect a little bit of everything in this baby--from angst to romance. No real X-File though, unless you want to count Scully. This is a character study. Feedback of all types are welcome.

Disclaimer: The characters in this piece of fiction are not mine, although I often wish they were. They belong to the Mother of All Creators, 1013 Productions and Fox Broadcasting. I like to think they also belong to Gillian Anderson and David Duchovny.

Thanks to the angst that is Melissa Etheridge for the title and the song that flowed from it."

You've probably already read this classic story, but that doesn't mean you shouldn't read it again. And again. It includes one of the greatest plane boarding scenes in all of fanfic, which is just one of its many, many very dramatic and romantic virtues. Stories in this universe continue with the also marvelous Into Each Other Sinking series. [2]

Dance Without Sleeping was the first fanfic I ever read. I was at a site with the top 20 picks and it was #1. So I went for it! It had me happy, crying, and holding my breath practically through the entire thing. I recommended it to everyone I knew. It is still my favorite to this day. No others have been able to compare, and I have read ALOT! [3]

Dance Without Sleeping was full of the kind of love that everyone wishes they can experience; unconditional, true, and unending. The fact that the characters tend to "break up" and "get back together" makes the story more believable, and it is classic 4th/5th season. I am thrilled that Ms. Bower took the time and effort to create such a work of art. It made me cry, laugh, cringe, shout, all these things. I think that any FanFic that is well written is an episode in itself, except better: you get to decide the camera angles. [4]

This for me was the defining MSR fic. Not only that, this is probably one of the best cancerfics out there. [5]

How can words even attempt to describe this story. In some back receses of our minds we all have seceret wishes and desires, it is only the lucky among us that has someone who wants to turn those desires into reality. Of course, for those of us that have such a person, those wishes take a distant second place to wanting that person at your side. Just read the story and I PROMISE to shut up! [6]

I read "Dance without sleeping" by Lydia Bower first and that killed me and got me hooked [on fanfic]! [7]

I only got online in November of 1998, but believe me I have been making up for lost time! <g> I honestly don't recall the very very first piece of fanfic I read. However, I will =never= forget that the first fic that really knocked me on my ass was "Dance Without Sleeping" by Lydia Bower. It is still the yardstick against which I measure all other fic. [9]

The ultimate reread....C'mon, I *know* you've read it a million times, but it's still fabulous at one million and one. Trust me, I should know! [10]

My God, this is fan fic at its finest. I absolutely fell in love with Mulder in this story. The complete love and support he demonstrates as Scully struggles with her cancer is so moving I have never, ever forgotten it. [11]

If you haven’t read it, DANCE WITHOUT SLEEPING BY LYDIA BOWER.

It’s a loooong one, and the sex isn’t until pretty late in the game and might not be as huge of a part of it as you’re looking for, but it’s amazing. It takes place immediately after Momento Mori or thereabouts I think. It’s pretty heavy but very well written [12]

We had to triple-check our spreadsheet to be sure we hadn’t yet recced today’s fic for you all, and we couldn’t believe that we hadn’t yet. It’s one of those mainstays, those fic staples, that you should have read at least once by now, if not once or twice a year.

Because what’s not to love about a cancer arc series that is essentially one long wish fulfillment story on the part of Mulder for Scully? It’s really no wonder this fic won so many awards back in the day (1998 Spookys Winner: Outstanding Author (2nd), First Place Winner of 1997 Morley for Best Series, Best Mulder/Scully Romance Story, Best Author).

Despite its sometimes admittedly saccharine storyline, the characters and the dialogue never seem to veer too far from what we know to be true of Mulder and Scully, and in that, we find ourselves fawning over the romance that blossoms in a way we kinda sorta guiltily wish we would have gotten to see onscreen.

This fic has pretty much everything you could possibly want in a fic, in the tropiest of ways. Mulder buying Scully a dress and telling her to be somewhere at a certain time? Yep, this story’s got it. Midnight confessions over cotton candy? Sure, why not? Mulder calling Scully ‘baby’? You betcha. Some Emily angst. Yeeeeeeeup. And one helluva first time that you will be really glad you read. [13]