Crown of Thorns Podrama is a dramatised, full-cast recording, or multivoice podfic, of irisbleufic’s Crown of Thorns [The Walls, the Wainscot, and the Mouse] ‘Verse[1], a 275,000 word “Book Omens” fanfiction inspired by Terry Pratchett and Neil Gaiman’s 1990 novel Good Omens. This collaborative fan production involved over 60 people in total, and took about fifteen months to organise and complete. The runtime of the audio drama is 36:47:12, plus an additional 17:18:13 of bonus material, for a total of 54:05:25 of audio content.

The project was conceived, organised, and produced by Literarion, who began soliciting participants via social media and in various Discord communities in October 2019.

Crown of Thorns is a collection of short stories set after the events of the book, with the common thread of following Aziraphale and Crowley's lives in the aftermath of the not-Apocalypse, as well as the people that they meet when trying to carve out a place for themselves in the human world. It features both canon characters and original characters, including themes such as love (and the emotional risks the main characters are willing to take in order to still love those around them), family and found family, friendship, mortality, humanity, passage of time, and the spectrum of morality.

Origins of the fic

The authors of the book had once hinted that the main characters would move to the South Downs, England, after the events of the story. In September 2005, upon managing to obtain tickets to two separate live-readings with each author, irisbleufic asked them both the same question about what exactly Aziraphale and Crowley were doing there, and Gaiman replied that they would be “sharing a cottage”.[2] Fandom received the news with enthusiasm, and a month later, issued a prompt to irisbleufic to write something about that. They wrote A Better Place. Five years later, during a Good Omens Holiday Exchange, irisbleufic was asked to add to the story, and continued it at intervals until the 14th of February 2019 when the last chapter was posted. Crown of Thorns is therefore one of the first fanfictions, if not the first, to elaborate on the “Cottage in the South Downs” trope in a post-canon Good Omens story.

LENA: Was it from that question [to Neil Gaiman] that you decided to start Crown of Thorns[...]?

AJ: It was. So that was September of 2005. I moved to the U.K. October. [...] I'd already been having conversations with friends and they're like [...] you should do something with that. It's really [...] awesome that you were able to sort of draw that out, tease that out of them. And I thought, oh, that's [...] really a wonderful idea. So that evening I wrote A Better Place, which is the first chapter. And the second chapter actually didn't come along for like I think a few years after that, because I thought at the time I wrote A Better Place that it would make a good starting point for theories. But it took me until someone in [...] Good Omens Holiday exchange wanted- it was the first request for a South Downs story that I had seen since I wrote “A Better Place”. [...] And so the story I wrote, The Walls, The Wainscot and The Mouse, for that person in Good Omens exchange became the second chapter of CoT. And from there, I just never stopped. I had enough, I had the momentum I needed to turn it into a series.

AJ: I had received the prompt from a friend asking me if you were to write something, it was the last time you could ever write about them. What would it look like? What would [...] you want to be the very last glimpse you ever had? So I was thinking very much about the signing [...]. So I wrote A Better Place, which became the first chapter of CoT, which I think it's ironic that something I wrote just meant to be this little snapshot of “If I could only have one last glimpse at them,” I would want to know if that's where they were and that they were happy. But the way things work for me is that I can never- something that I think is small and going to stay self-contained very rarely does. [...] And so I was like, OK, I can do more with that. [...] I'm not going to treat it like a little what if goodbye or like a little test situation.

Unusually for multivoice podfics, participants who wanted a speaking role were invited to submit auditions, and were cast by Literarion and a team of directors including the author, irisbleufic. Irisbleufic also served as a consultant and advisor to the project as a whole.

41 voice actors from all over the world were cast in the speaking parts, including Podfixx as the narrator, Literarion as Aziraphale, and CompassRose as Crowley. Irisbleufic made guest vocal appearances as themself and in minor roles in several chapters. 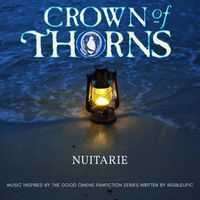 The podrama’s original musical score was composed and performed by Nuitarie. Nuitarie’s soundtrack was given its own “story” on Archive of Our Own,[6] and can be heard in full on Bandcamp.[7]

Of the composition process, Nuitarie said, during their interview with Lena Lawlipop[8]:

For Crown of Thorns, I remember having a conversation very early on with (irisbleufic) that they wanted to have acoustic instruments mainly, and that they enjoyed the piano and the cello and the guitar. And so I decided that most of the soundtrack for the podcast was going to feature these instruments, these string instruments. So the piano is always somewhere, and the cello […] and to accompany the cello, there’s a third instrument […] called the nyckelharpa. And it’s a Swedish instrument that looks like the lovechild of a hurdy gurdy and a cello. It’s very weird, but it has a lovely sound […] And so those are the three main instruments that I used throughout the soundtrack. And it’s a bit of a constraint, but it’s nice to have a constraint when you are creating. 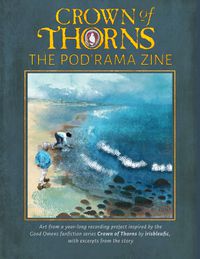 Crown of Thorns Podrama was designed as a multimedia endeavour from the start, and original fan art was integral to the concept. Artists were solicited along with voice actors in the initial stages of the project, and there was ongoing artist recruitment during the year. Each chapter on AO3 is accompanied by original artwork created by one of 26 different artists, which was also included in all promotional social media posts for the chapter. Other incidental artwork was also created over the course of the project.

Crown of Thorns: The Pod’rama Zine was created by AJfanfic, using the artwork and text excerpts from the chapters that inspired each piece, with a cover illustration by CompassRose. The zine is freely available.[9]

Because the project used voice actors from all over the world, with vastly different recording equipment, the objective of the editing process was to get all the actors sounding as consistent as possible. Recording, editing and production were all done in the free, open-source audio editing application Audacity. The audio editing and beta listening team assembling the recordings were coordinated by UnholyCrowley as head editor.

Before recording began, a team of volunteers edited document copies of each chapter to produce scripts, colour-coded by each character’s lines. These scripts were used as reference throughout the recording and editing process.

The voice actors all followed the same procedures of initial cleanup for their raw recordings, editing out mistakes and doing basic noise reduction and normalisation processing. They also used Audacity’s labelling function to mark each line.

The chapter editor then took the chapter script, Podfixx’s narration track, and all of the voice actor tracks from that specific chapter, and used Audacity to edit them together. Working on the narration track, the editor would find each character’s dialogue line and substitute it with the voice actor’s version of the same line, editing vocal levels and removing any stray clicks and breaths along the way. Since Podfixx read the entire chapter, including all character dialogue, her reading was sometimes used as backup when a one-liner character didn’t get cast or an actor dropped out of the project.

Once the dialogue editing was done for the whole chapter, the editor would add in the transition music at scene breaks or changes of location, as well as the intro and outro music relevant for the chapter. The chapter was then sent to the head editor.

The head editor’s responsibility was mainly to do a last sweep over the editing to ensure consistency (since each editor on the team had their own style of editing). During this step, the head editor would go over chapter audio with a “fine toothed comb”, ensuring that the rhythm and flow of the chapter and characters sounded natural to a listener, as though overhearing a conversation. Once all these tweaks were made, the head editor ran final audio processing: compression (for crispness), and normalisation (to level all the tracks at a similar volume/amplification), and exported the chapter to publication-ready MP3 and WAV files. Before publication, the final file was reviewed by a beta listener to make sure nothing was missed.

The posting schedule, along with many other details of project planning, was established by Literarion before the project started, and involved one chapter or more (depending on length) released per week starting on January 26, 2020, and finishing with the final chapter release and epilogue, in seven parts from December 18 to 24, 2020. 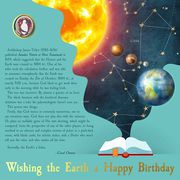 Several significant dates during the 2020 release year, including Gaiman’s and Pratchett’s birthdays, April Fool’s Day, the anniversary of the TV series release, and the canonical “Birthday of the World” in the Good Omens ‘verse, were recognised with art, social media postings, special challenges including a “Draw This In Your Style” event inspired by the many various Good Omens book covers, or special episodes. These were promoted through the project’s social media (tumblr, twitter, instagram).

Other bonus audio content was also created in conjunction with the project. LenaLawlipop planned and conducted interviews in audio or text form with many team members about their fandom history and specific involvement in the project. These interviews and transcripts can be found on AO3. Head editor UnholyCrowley assembled three compilations of bloopers from participants’ voice recordings, covering chapters 1-25, 26-50, and 51-76, which can be found on AO3. A joke edition of Chapter 21, using various text-to-speech accents, with a joke cover, was created for April 1, 2020, and released ahead of the actual content.

The project as a whole concluded on December 31, 2020, with the release of the art fanzine, LenaLawlipop’s debriefing interview with Literarion[11], and the final blooper compilation. The planning documents and background material were archived for the use and reference of others who might want to undertake similar projects.[12]

The podrama is exquisitely cast and acted—the voices create a new canon as compelling as any other adaptation of these characters. Professional-grade editing and production, a beautifully evocative score, and original artwork come together in an organizational tour-de-force by Literarion and crew: one of the most impressive fanworks that I have ever encountered. Gesamtkunstfic.
Anne Jamison, The Rec Centre 251[13]

Example graphics from the project