From Fanlore
(Redirected from Cross-Switch)
Jump to: navigation, search

Amare is a slash and het multifandom anthology. The title is pronounced "amaray."

It is a sister zine to Frak.

Some issues are novels. The first issue was all slash, and the publisher said that future issues would possibly be "straight." [1]

one cover of issue #1 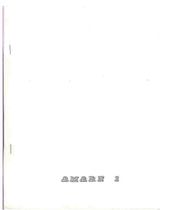 another cover of issue #1 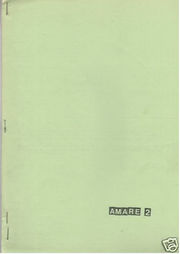 Amare 2 was published in 1986 and contains 55 pages. It is a single novel and is adult het.

Summary: During the escape from Ultraworld, Tarrant got the memory tubes mixed up. On their return to the Liberator, Avon and Cally find they are in each other's bodies.

Amare 3 was published in 1986. It is an A-Team slash special with stories by CJW, Flipper, Rowan, Orion, and Janet Ellicott.

Amare 5 contains all Beauty and the Beast fiction. It is 34 pages and het.

Romantic stories about some of the other people who share Vincent's world: Mouse, Jamie, WIlliam, and some others not seen in the series. These are second season stories. [2]

This issue is solely B&B. It contains mild, non-explicit sexual situations. Three stories, all centering on Tunnel inhabitants, with V/C taking minor roles. Includes "When Love Was King," in which tunnel newcomer Terri interacts with V, Father, and especially William, with whom she comes to share a closeness. "In the Bleak Midwinter," visits Jamie and Mouse at Winterfest. "Of Mice and Woman," follows tunnel newcomer Shari, a traumatized girl how comes out of her shell with Mouse's gentle guidance. [3]

Amare 6 is an adult Tomorrow People zine. All stories by Janet Ellicott. 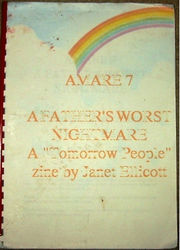 Amare 7 is a slash Tomorrow People 48-page novel written and published in 1996 by Janet Ellicott called "A Father's Worst Nightmare."

Amare 8 is a multifandom 58-page anthology of fiction by Janet Ellicott.