Catradora is a femslash pairing of Adora and Catra from the She-Ra and the Princesses of Power fandom.

Adora and Catra are childhood friends raised by the Horde in the Fright Zone together. After Adora finds a magic sword that transforms her into She-Ra and joins the rebellion she becomes at odds with Catra, who stays loyal to the Horde.

In May 2020, the fifth and final season of She Ra was released. To the incredulous joy of fans and queer viewers, the romantic hinting of Adora and Catra's relationship became actualized, finally climaxing in the canonization of Catradora in the season finale.[1] Showrunner Noelle Stevenson quickly confirmed in interviews following the release that their (romantic) relationship had always been the center focus for the story and plot of She Ra, and that the push for their endgame was hard won.

It did take me a while before I finally put my cards on the table. I said, “Look, this is what I’ve been building to this whole time. And I want this to be the canonical textual arc of the final season.” And it was not only supported, but embraced. It feels so incredible to finally just be able to talk about it and show it and have it be undeniably central to this final season in a very, very textually romantic way.[2]

The ambiguity of Adora and Catra's relationship in past seasons had always contained clear implications towards there being more than platonic elements, though fans were rightly unsure if that would culminate in anything more than overt subtext. Stevenson admitted that the groundwork for canonically romantic Catradora had been laid from the very beginning. However, the creator faced constant pushback from Netflix execs.

We weren’t subtle about what we wanted to do in the show... It's everywhere," but that didn't stop higher-ups from pushing back on these more visible queer moments in increasingly "frustrating" ways.

I think early on in season one, we might've gone a little too hard with 'Princess Prom' in a lot of ways for the comforts of some of the people who were giving notes on the show. And so it was something that was like… it is frustrating to have a vision and believe in it, and then be pulled back. You have to be careful. You can't do this. You can’t do that.

Interest in the pairing began as more information surrounding the new She-Ra reboot was released, particularly claims that Adora and Catra's relationship was central to the series. Fans picked up on the possibility of an Enemies to Lovers situation playing out and grew more excited. Optimism that such a relationship could also become canon was bolstered by She-Ra's showrunner, Noelle Stevenson, having a popular and positive fannish presence as well as being an out lesbian.

After season 1 was released Catradora became the juggernaut ship within the fandom. It debuted on Tumblr's Fandometrics as the most reblogged ship the same week as the season premiere,[3] and remained in the top 20 throughout the year.

Much of the discussion surrounding the pair and meta written about them centred on the deterioration of their relationship and what aspects of their character, good and bad, were highlighted because of this. Fans also speculated on what steps would need to be taken to bring the two together again and if that would happen within a romantic context or not. Many were adamant from the beginning of the series being released that Catradora would eventually become canon. Others were less optimistic due to She-Ra being a legacy character owned by Mattel and the series being produced by Dreamworks.

Catradora also faced some opposition within the fandom. Some believed that Catra and Adora's relationship had become too toxic due to Catra's descent into villainy throughout the series; and that Catra should not be rewarded with a love interest even if she was later redeemed. Other's noted that they read their relationship as foster-sisters, due to Shadow Weaver being a parental figure to them both.[4] Claims of Catra and Adora being foster-sisters were often linked to discourse surrounding the Voltron pairing Sheith, with pro and anti shippers using Catradora as a way to further argue for or against it.[5] This was met with frustration by Catradora fans who did not want to be associated with another fandoms discourse and furthered the divide between the two fandoms.[6]

The interpretation of Catradora as toxic and/or pseudo-incestuous was met with heavy criticism from fans, though for vastly different reasons. To the claims of incest, fans pointed out that nowhere in the show's canon did it label them as such, as well as noting that such arguments have often been used against femslash pairings in the past as a way to delegitimise romantic relationships between women.[7] The claims of Catra and Adora's relationship being toxic were more often than not accepted by fans, however they argued that this did not inherently make it a bad ship or that they should not become canon because of their past transgressions. Most who believed that Catradora would become a couple believed it would only happen if Catra chose to redeem herself and make amends with Adora. Others also criticised fans who purported to wanting more use of the Enemies to Lovers trope but labelled pairings involving enemies as problematic or toxic.

Many of the crew that worked on She-Ra have an active social media presence, including showrunner Noelle Stevenson, which lead to many interaction between both the general She-Ra fandom and Catradora shippers. Fans often took to screenshotting any time crew members would like Catradora related tweets and fanart as further proof that it would become canon, or was at least intended to be read as romantic.[8] This also applied to interviews and con appearances that were often shared by cutting together short videos or making gifs of relevant parts.

One of the most infamous instance of this happened during the She-Ra panel at Emerald City Comic Con in 2019. When Noelle was asked about her favourite fan moment, she recalled a couple who cosplayed as Catra and Adora and how one of them proposed to the other while in costume and that they were now engaged.[9][10] An audience member at the panel then shouted "put it in the show!" to which Noelle did not respond but simply smiled and drank from a bottle of water. The moment was widely shared within the fandom, with stills from the panel becoming a popular reaction image.[11][12] In 2020, following the series finale where Catradora had become canon, Noelle noted in an interview that the fan reaction to that moment lead her to realise she had a poor poker face. 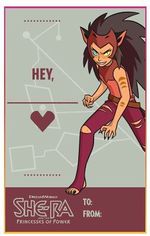 Outside of the crew's social media activity, fans also looked to the official She-Ra and Dreamworks accounts for further hints and validation. Following the first season, official She-Ra Valentine's Day cards were released for most characters, including a card for Catra that said "Hey, _____", paralleling her catchphrase where she says, "Hey, Adora." The context of this being on a Valentine's Day card did not go unnoticed by the fandom.[13][14]

Fans, critics, and reviewers alike have noted that the canonization of Catra/Adora is a ground-breaking moment in the zeitgeist for queer representation and queer stories. She Ra had already established itself as a show following in the footsteps of Steven Universe when it came to casual diverse representation: the background is littered with queer support characters and canonically queer relationships (e.g. Bow's two fathers, Princess Spinerella and Netossa, the nonbinary character Double Trouble) as well as characters written to be recognizably neuroatypical such as Entrapta. But as David Opie put it: "LGBTQ+ characters have appeared on children's TV before, but to our knowledge, a queer lead has never been given the chance to find domestic bliss so openly and without fear of reprisal. The impact She-Ra's finale will have on children (and also adults) watching is impossible to overstate, validating queer fans everywhere who have longed to see their own stories told on screen."[1] Fans have echoed this sentiment across platforms.

i say this as someone who has spent almost a decade in lesbian culture journalism at places like out, them, bitch, and autostraddle, where i was trans editor. i’ve written abt adventure time, korra, SU, lumberjanes, danger & eggs, etc #sheraS5 changed the game

Catradora shot to the top of Tumblr's trending ships, jumping 9 spots, in the weekend following the finale. Other trending She Ra ships were: Entrapdak (#2), Glimbow (#5) and Seamista (#10).[15]

Coincidentally, another animated femslash couple also became canon the same day as Catradora, with Harley Quinn and Poison Ivy sharing a kiss in the Harley Quinn TV series. Many posts were made celebrating and marvelling about this happening on the same day.[16]