Boys in Chains was a hand-coded multifandom slash fan fiction archive (with a companion mailing list, boysinchains and BIC-Announcements) devoted to fanworks about "power inequalities" or "structurally unequal relationships."

Boys in Chains also archived portions of the Key Game[1] universe fiction. By the time the archive stopped updating, it had 478 stories.

"This site was created and is maintained by delicate, etiquette-oriented young women who are looking for academic discussions about how slashing characters built in a capitalistic system reclaims our power.

Did you buy that? Poor, innocent sod.

Honestly, we like fic, we like boys and we like chains (although RavenD's not at all opposed to leather). This is a happy home for all of the above.

In addition to the fan fiction archive, the website hosted art and photo manips focusing on themes of dominance and submission. Samples are below and more can be found in the Boys in Chains Art Gallery (via Wayback) or in the Chains AO3 Collection.

In 2001, the website began advertising for submissions for a fanzine "Boys in Chains Anthology" to be published by Torquere Press. The zine was never published.

In October 2014, Open Doors and Dusk announced that the archive will be imported to the Archive of Our Own and renamed Chains: the Powerfic archive[3]. The import was completed in July 2015.

'Rope' by The Theban Band created specially for the Archive. Note: Marked as sexually explicit; minimized. 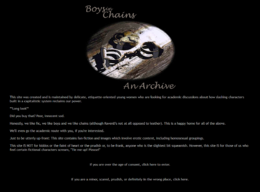 RavenD: webmistress, listmom, and archivist of any fandoms not mentioned below.

Basinke: archivist for The Sentinel and Highlander fic.

The hand-coded archive had the following categories, some of which were further broken down into fandom pages:

Works were listed on each page alphabetically by author (or by fandom and then author on the Misc pages) with and included title, author, pairing, rating, summary and warnings. Pairings, Ratings and Warnings were not standardised by the archive.