From Fanlore
(Redirected from Battlefields of Slash)
Jump to: navigation, search 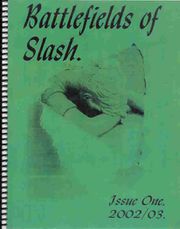 Battlefields of Slash. 1 was published in 2003 and contains 102 pages. The cover is uncredited. Interior art:

Lord of the Rings:

I FINALLY have read some of the Battlefields of Slash Zine. IT SO TOTALLY ROCKS! Besides the gorgeous presentation *bows to Starry-wan* it has some kick-ass stories in it. I've only read some of the shorter ones so far, though. I'm waiting until I have some uninterrupted time to read the longer stories.

"Drive" by Libertine just totally blew me away. Wonderful characterization of Ginny. 1 do not take this lightly, mostly people can't write a Ginny that I love. The psychology in this story is beautiful. This is a story that I'm going to be rereading.

"Cold Hands" by Ivy Blossom was gorgeous. God. the doom between Harry and Draco was profound. Lovely.

(Speaking of Doom, the "Pairings of Doom" were funny. Especiall "Draco/fish." And I love what Starkiller wrote for Hermione/Hagrid - Big brown eyes in the face of a pretty girl can melt even the hardest of hearts.)

"I Would Never Leave You, Ever" by Zed Adams. Creepy!

"White Silk and Pink Lace" by SkyFire was so fucking funny! I just about had an aneurysm trying to stifle my laughter so the other people on the bus wouldn't think I was crazy. Poor Elladan, indeed! Actually, I think this story would fit in well with GoR. Heh.

'The Midas Touch" by Starkiller and Vayshti scares me. Dear god! Wrong, in so many ways, but in presentation it was JUST RIGHT. Eep! Enjoyed it so!

"Summertime" by Starkiller and Mistress Darke Shadow rocked. A wonderful Garibaldi. Beautiful obsession. I do, however, wish it had ended on that bittersweet note, that hole of sorrow Garibaldi was in (the line "None of your business. At all."). I did enjoy the ending (quite a bit, actually, beautiful sweetness there) but I think it would have been more powerful without the happy. Another story that I will be rereading.

Whee! I got the Battlefields of Slash Fanzine #1. Am in awe by the talent on showcase!

Tzi - Synthetic disturbs me And I meant that in a good way! Wow...wow

Starry - Draco's Inferno blew me away. Did I tell you how I first fell in love with your Boat Trilogy and how I was overwhelmed by your sheer genius? Boat Trilogy will always have a place in my heart. I love it partly because Harry and Draco got some "every chapter" without fail, and for that. I salute you!

ElsewhereCW - your story left me with a bone deep shiver! Can't remember the title, but the words "You are precious to me" keep reverberating in my head for days!

Mom-Ra - first Forever Knight I read. I don't have a clue who they are, but this lady is vastly talented. Lord... 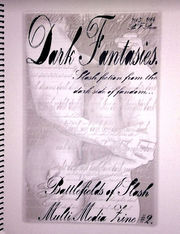 another cover of issue #2

Battlefields of Slash. 2 was published in February 2004 and contains 98 pages.[3] It is subtitled, "Dark Fantasies: Slash fiction from the dark side of passion..."

Welcome to the second issue of the Battlefields fanzine. This issue theme is 'dark fantasies.' Why dark fantasies? Well, it went something along the lines of this: I woke up one morning and thought, "Hmm. wouldn't it be good to have a theme for the second issue of the Battlefields zine." So I put the question to Vayshti and Minnie and though we came up with a lot of theme ideas, none of them really seemed quite right. So I thought on it some more and was struck with inspiration while writing a bdsm scene for a 'Babylon 5' story (which has yet to be finished, ugh.) So I settled on dark fantasies' and immediately went forth and posted to the usual lists and so on asking for tribs Now, 1 left the interpretation of that phrase open to the individual writer. Dark fantasies can mean just about anything, and I thought it would be very interesting to see what people wrote choosing their own interpretation of that theme rather than being given specific parameters of writing by me. The results were beyond anything in my wildest dreams.