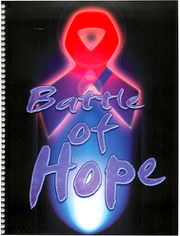 Battle of Hope is a 220-page slash anthology with an AIDS/HIV theme. The color cover is by Cat's Meow Creative Arts, along with eleven pieces of interior art by K9, Hindman, and Shar. It is a charity zine.

From the zine's introduction: "All of the stories in this zine end with happy endings -- we felt that it was important that our authors show that people living with the spectre of HIV can still live rich lives full of dreams."

[On the Other Foot]: A clever twist on the story of AIDS, though with a few too many Americanisms for me to be totally comfortable. Probably not what you'd expect from the zine that it's in (it's not a heart-wrenching, tragic, everyone-gay-is-doomed story at all), which was a nice surprise to me! It's the only Pros story in the zine, and it's only three and a half pages long, so I wouldn't buy the zine just for the story unless it was available very cheaply, or unless you're into the other fandoms featured, but I wasn't sorry to have read it! [1]