Animorphs is an English language science fiction series of children's literature (or young adult) books written by K. A. Applegate (Katherine Applegate, her husband Michael Grant, and ghostwriters) and published by Scholastic. The books are told in first person, each book narrated by one of the 6 main characters.

The story revolves around five humans, Jake, Marco, Cassie, Rachel, and Tobias, and one alien, Aximili-Esgarrouth-Isthill (nicknamed Ax), who obtain the ability to morph into any animal they touch. Naming themselves "Animorphs" (a portmanteau of "animal morphers") they use their ability to battle the Yeerks, aliens who are secretly invading Earth. Horror, war, dehumanization, sanity, morality, innocence, leadership, freedom, and growing up are core motifs of the series.

Published between June 1996 and May 2001, the series consisted of 54 books and includes ten companion books. Starting with #25: The Extreme, the books were mostly ghost written. The books were originally marketed to children as young as 6 and many fans bought them at Scholastic book fairs in elementary school (so, at age ten or younger) even though two decades after the first books' publication the books are often described as young adult books. The first 8 books were re-released in 2011–2012, but didn't sell very well.

Though not a major fandom, the books were very popular and still have a fan following and active communities. Many fans read the books as children and then return to the series as adults, at which point they begin wondering how books with so much body horror and trauma got published and marketed to children.[1]

Michael Grant said of his and Applegate's series "Gone" (and presumably "Animorphs"):

You will have noticed that I didn’t give this story a pat conclusion, and that’s deliberate. Katherine (my wife and frequent coauthor, K.A. Applegate) and I were among the earliest authors to encounter fan fiction via the internet. We’ve embraced it from the start. And some part of me hopes that fanfic writers will carry this story forward. Don’t ask me what happens to these characters next, because I don’t know. Will Dekka find love, perhaps with Simone? Will Cruz and Armo? How will Sam and Astrid do in this terrifying extension of earlier trauma? Maybe you have some ideas. I built the sandbox; if you want to bring your pails and shovels and play in it, cool. It’s one of the best things about writing for young people: you are my collaborators in imagination. If I leave blanks it’s because I know you’ll fill them. [2]

Fanfiction has been the most common form of fannish activity, but icons were popular on livejournal and there's a good amount of fanart on tumblr. There are also several podcasts. The height of fannish activity was probably around 1999-2002, and it has been getting quieter since. However, many fans in their twenties-thirties still remember the books fondly, and will consider writing stories occasionally for Yuletide and similar challenges. Tumblr and reddit have a good deal of headcanons, meta, and other fan activity.

There are 2 ways people reminisce about the Animorph books.
People who never read them: “Haha remember those books that always had thosw crazy covers”


And people who read the books: “Animorphs??!?! AHHHHHHHHHHHHH” *incoherent yelling* *something catches fire*[3] 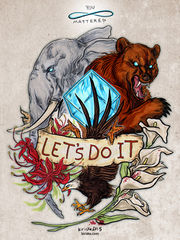