This article is about the fandom. For the character, see Alex Rider (character).

The series originally ended in 2011 with Scorpia Rising, the intended series finale. However, in 2016, an announcement was released on Anthony Horowitz's website that he was continuing the series.[1]

The first novel, Stormbreaker, was released in the United Kingdom in 2000 and was adapted into a motion picture in 2006 starring Alex Pettyfer. As of 2020, the book series has a web television series adaptation which premiered on Amazon Prime Video in the United Kingdom on June 4. The first season is based off of the second novel, Point Blanc, and filming for Season 2 is currently underway.

The Alex Rider series has a fairly small fandom, dubbed the "Sock Drawer" and its fans the "socks".[2] Due to the TV adaptation, the fandom has grown considerably. It is also quite old, with many old communities and members owning accounts on LiveJournal. There is also a fandom server, Cub's Army, that was made in 2018 by Hollow Rosewood.[3] 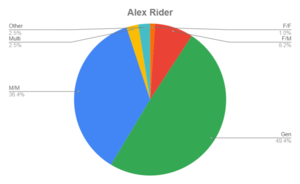 The chart covers categories within the AR fandom, specifically the Alex Rider - Anthony Horowitz tag, i.e. not fics that only include the Alex Rider (TV 2020) tag. 49.4% of the AR fics on AO3 are gen. 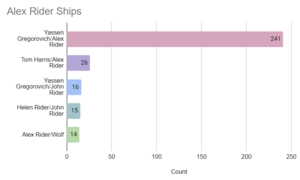 The fandom is unusually focused on Gen, with 49.4% of fanworks being Gen compared to the AO3's average of 17.1%.[4] The shipping fanworks are dominated by one pairing, Yalex, which has more than nine times the number of fanworks than the second most popular pairing, Tomlex.[5] This is perhaps due to the solo nature of the books and the lack of recurring characters who have interesting interactions with Alex.

Yalex – Yassen Gregorovich/Alex Rider: Yassen has only appeared in three books in the series but he has made a big impact on the fans, evidenced by the movie and TV show putting his character into a much larger focus. He has an unusual relationship with Alex--he is an assassin antagonist but he refuses to kill Alex, and he has a link to Alex's father. Their characters also mirror each other, both being forced into an adult world after their childhood was destroyed at age 14, but on opposite sides. Although the pairing can be very dark many creators choose to age Alex up and reimagine their relationship in a happier context.

Tomlex – Tom Harris/Alex Rider: As Alex's closest school friend, Tom did not show up in the book series until book five 'Scorpia'. The TV show, however, has centred their friendship as a much bigger part of Alex's normal life. This has proven to be a welcome development for AR fans, as approximately half of Tomlex fanfic on AO3 was written after the show aired.[5]