A_Fallen_Sister is a fanfiction author and fanartist who was active from the early 2000s through early 2010s.

She gave a 2007 interview with Supernatural Roundtable: see Ask the Artist: a_fallen_sister. 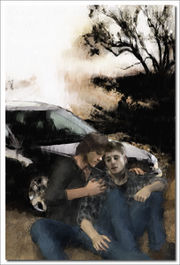 "The roadside scene", one of three fanart pieces for Halfway Home. (J2, 2007)
Recced at crack_impala: "These pieces are incredible. The colors are gorgeous; the mood is very whimsical and peaceful. And the one adult image is incredibly hot."[1]